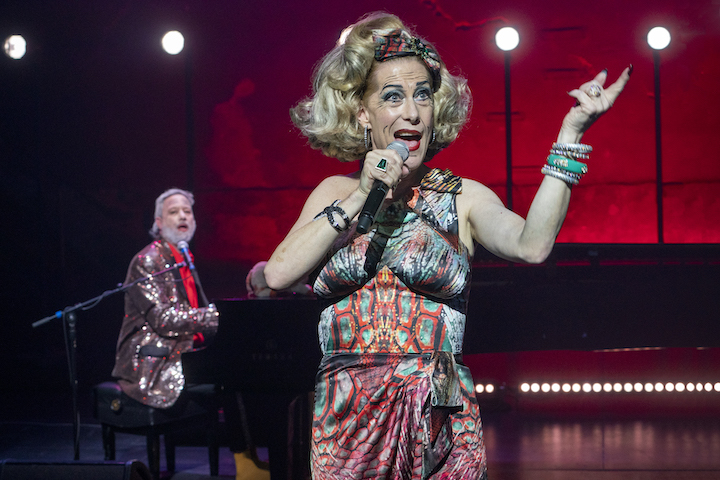 The holidays are the perfect time to get together with family, so join the legendary Mx Justin Vivian Bond, for a dry (well, actually pretty boozy) run as they team up with an old partner in crime, Kenny Mellman, for Kiki & Herb Sleigh at BAM.

The “lovely, decrepit old Harvey theater” is decorated very sparely with a baby grand, a bejeweled sleigh hanging from the ceiling, and a bar-height table featuring a bottle of booze and a champagne bucket full of ice. The glitz comes courtesy of the storied pair of characters that are Kiki & Herb, fashioned as a ‘50s Baltimore lounge act still looking for their big break, throwback relics of a lost age.

Grey-bearded Herb takes the stage in a silver and red sequin suit sits at the piano and opens the show with Billy Joel’s “Miami 2017,” singing, “I’ve seen the lights go out on Broadway.” Kiki stalks on a few beats later, all blowsy blonde goodness in a silky, off-the-shoulder frock, and, with a sultry growl, begins to do their stuff.

Singing Kiss’s “I Was Made for Lovin’ You,” Kiki literally works the crowd, mingling with the audience and sitting on a whole lot of laps, then segueing into a torch song rendition of Foreigner’s “Feels Like the First Time,” then finally getting the crowd to help in an acapella version of “Sleigh Ride.” That sets the tone for the rest of the evening: a grab bag of Christmas classics and 80s rock and pop tunes you’d never suspect would make the holiday lineup.

But somehow it all works. With a few jabs at the hospitality industry for the Virgin Mary’s “lost reservation” (no room at the inn, you know), Kiki explains the angel coming to Mary via Radiohead’s “Creep,” then layers an increasingly aggressive “We Wish You a Merry Christmas” on top. By the end of the song, you just know this bitch is not leaving without figgy pudding.

Because nothing says ‘festive’ quite like a worldwide pandemic, Kiki took time to acknowledge World AIDS Day at the December 1 show, quipping, “This is not our first time at the pandemic rodeo, is it, kids?” Then memorializing the day with a haunting rendition of The Church’s “Under the Milky Way.” 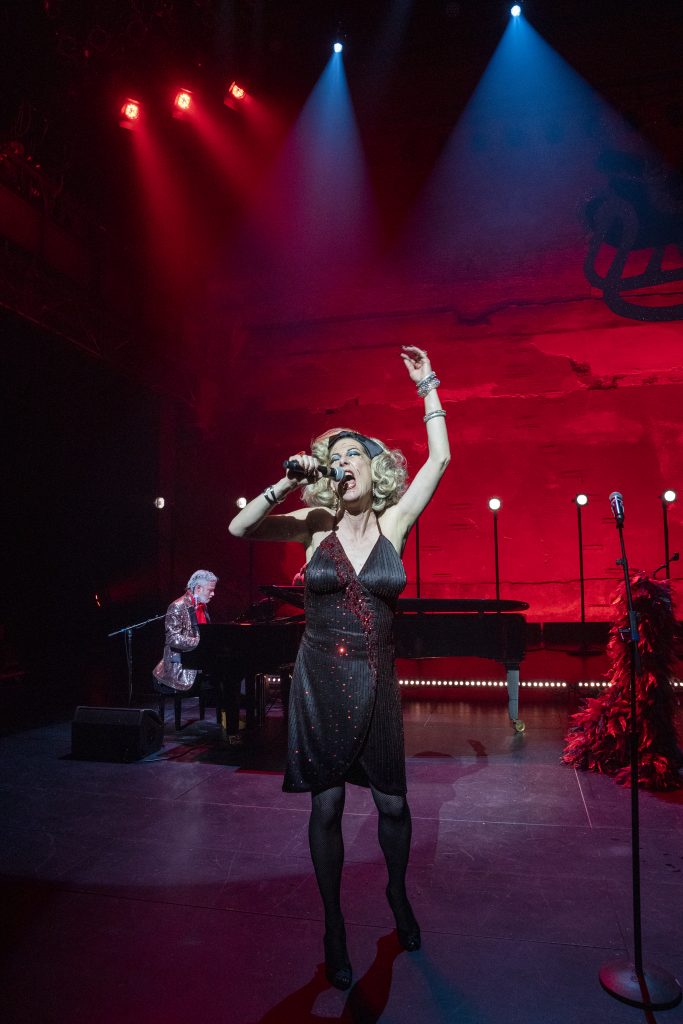 After a bit of chatter, Kiki recalls an early dalliance with a Santa impersonator she “only dated seasonally.” An off-color song called “Santa’s Pussy,” recalls how folks would call out, “There comes Ho-Ho-Ho and the Ho.” Then, Kiki spills the tea on “old friend” Sylvia Plath, a “drama queen” whose party trick was putting her head in the oven. “Women of letters,” Kiki quips, launching into Joni Mitchell’s lachrymose holiday tune, “River.” After all, this time locked down somberly dealing with Covid, it is nice to laugh again.

Kiki does a quick costume change into a red and black boa number, then delivers an ode to Herb via REO Speedwagon’s “Keep On Loving You,” singing, “It was us baby way before them, and we’re still together,” about meeting long ago at the Erie Children’s Institution.  It merges into Journey’s “Open Arms” before Herb delivers his retort to Kiki via a Hannukah song with lyrics like, “If I were a candle, I’d jump into your menorah, so I could be lit by you.” Somehow that seamlessly becomes Bruce Springsteen’s “I’m on Fire.”

Things get kooky as Kiki sings Belle and Sebastian’s “The Fox in the Snow” and chatters about biracial daughter Misty, non-binary grandbaby Opie, and BIPOC dad, then adds the kicker, “and I’m fly-by-night!” These wistful family memories mesh into a heart-wrenching version of Dan Fogelberg’s holiday rock classic, “Same Auld Lang Syne,” with its memorable lyrics, “We bought a six-pack at the liquor store, and we drank it in her car.” Next thing you know, the nativity story is delivered courtesy of Tori Amos’s “Crucify.” How that ends up becoming Lynyrd Skynyrd’s “Free Bird,” I’ll never know.

As good as the name implies, Kiki is a fabulous party of one. But that’s not to dismiss Herb. Without him, the night would be all peas and no carrots. Putting them back together is like enabling a pair of drunken manic-depressives, but there’s simply nothing better in this world. Because despite their silly, crazy posturing, both Bond and Mellman are extremely talented artists. The two polish off a bottle of whiskey along with their set and manage to kick off the holiday season in high style. And as Kiki promises at the end of a well-deserved encore, “If I could love, I’d love you all!”

Winnie McCroy is a longtime arts & entertainment writer who lives in Brooklyn with her wife and her highly spirited Doberman puppy, Fred. For more of her reviews, visit winniemccroy.com.