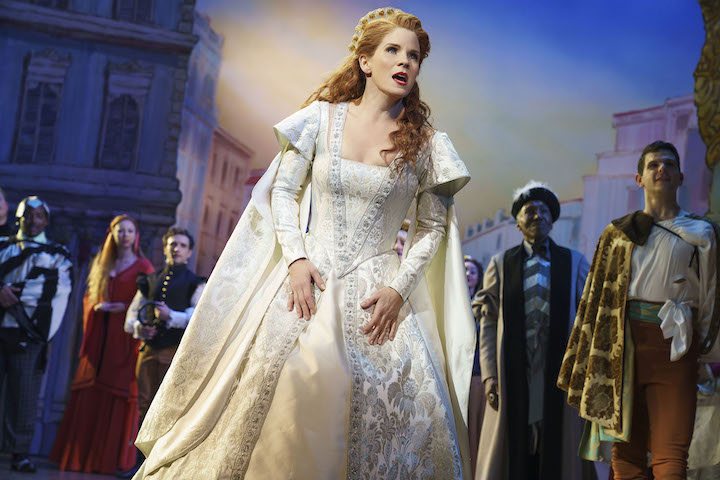 I was recently on a date that I knew within the first several minutes was on a fast track to nowhere. “I actually have a boyfriend,” confessed my Tindered companion, “I’m just exploring.” Regardless of my own moral compass, the strained conversation had me wishing I had just stayed home and binge-watched Netflix. The newly revived Kiss Me, Kate left me with the same sinking feeling.

From Cole Porter’s famed opening number, “Another Op’nin’, Another Show,” Kiss Me, Kate is as much an homage to Broadway as it is to the complexities and resilience of its leading couple. But in Scott Ellis’s anemically directed production, neither has the staying power or depth to celebrate (or reimagine) the 1949 Tony Award-winning hit.

Kiss Me, Kate features a book by Sam and Bella Spewack, which follows the backstage antics of separated theatrical power couple Lilli Vanessi (Kelli O’Hara) and Fred Graham (Will Chase) as they reunite onstage for a musical production of Shakespeare’s The Taming of the Shrew. A forged gambling note by fellow player Bill Calhoun (Corbin Bleu) keeps the couple in lockdown when two gangsters (Lance Coadie Williams and Terence Archie) arrive to collect— a situation Lilli is none too happy with when she misinterprets a romantic gesture from Fred, which was actually intended for his latest fling Lois Lane (Stephanie Styles). 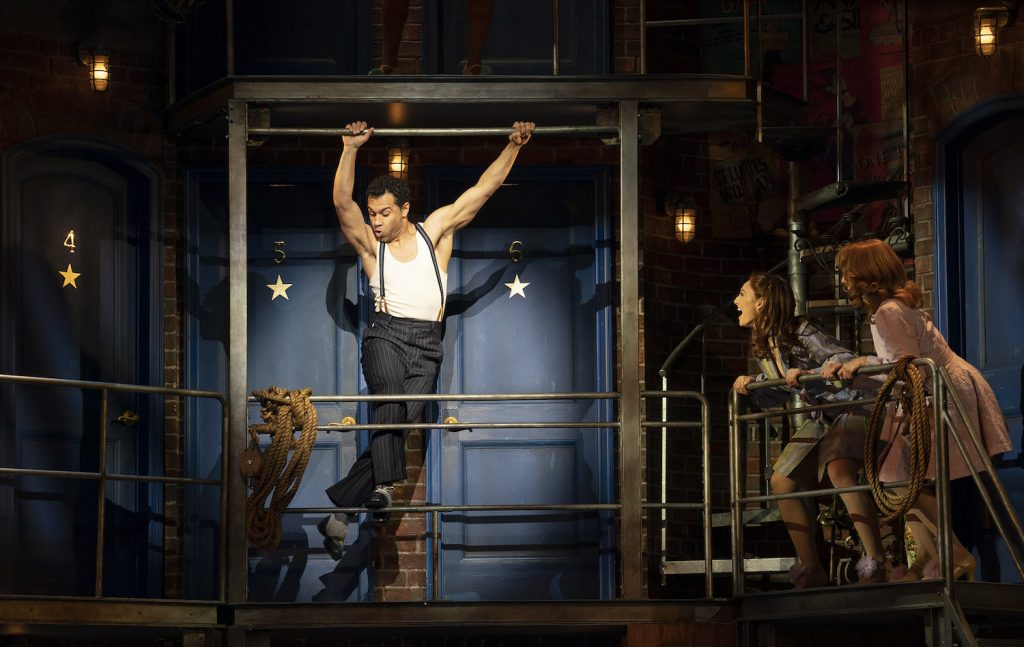 Much hullabaloo has been made among theater fans who consider the original script antiquated in its portrayal of the subjugation of women (though, often times, the lines blur between the show within the show and Fred and Lilli’s relationship). Enter Tony-nominated Amanda Green, who was brought on board and credited with “additional material” to help shepherd the piece into the 21st century.

I imagine most theatergoers don’t have the encyclopedic knowledge for a line-to-line comparison (In fact, at the performance I saw, most of the audience mistook an ensemble member’s first entrance for that of leading lady O’Hara and burst into applause, only to mutter and recoil their enthusiasm upon the luminescent star’s actual arrival.) So the casual or even enthusiastic attendee might not recognize the impact of this production’s altering of “I Am Ashamed That Women Are So Simple” to “I Am Ashamed That People Are So Simple.” It’s a noteworthy adjustment, which transcends gender and sexual orientation when Kate sings: 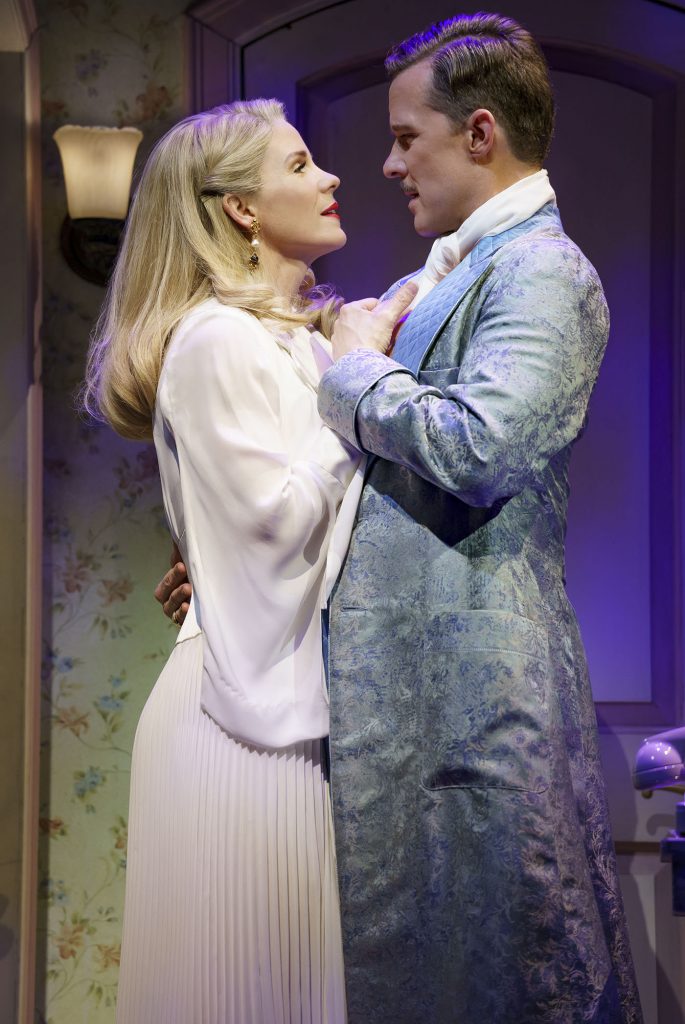 Kelli O’Hara and Will Chase in ‘Kiss Me, Kate!’ (Photo: Joan Marcus)

“Why are our bodies finite, bound for dust?
The time we share so brief and yet so dear?
If not to teach our proud and stubborn hearts
To love the best we can, while we are here.”

Unfortunately, O’Hara is the only one who earns the sentiment. So dynamic is her performance, which soars in operatic glory under the musical direction of Paul Gemignani, that she leaves the rest of the cast in her wake. As her husband-foe, Chase fails to capture the magnetism or bravado of his predecessors (Brian Stokes Mitchell in the 1999 revival and Alfred Drake, who originated the role). Chase, who made his Broadway debut as a replacement for the lead role of Chris in the original production of Miss Saigon, is at his best when he’s in his pop tenor wheelhouse. Here, he struggles to find depth in the score’s baritone vocal range and fares no better with the Shakespearean passages.

Lack of chemistry and infidelity trickle down to the secondary couple of Lois and Bill, though in this case, it’s the lady with the wandering eyes. Uncomfortable irony prevails: as Lilli reaches stardom through grit and hard work, it’s insinuated that Lois has slept her way to the top. Her lash-batting and purposefully rigid play-acting within Shrew imply that it wasn’t her talent that scored her the role. Of course, women, as well as men, are entitled to sleep with whomever they want. A 21st-century sensibility entitles all of us to sexual empowerment and independence. So why can’t Lois be a powerhouse both in the bedroom and on the stage?

Choreographer Warren Carlyle (Hello, Dolly!, She Love Me) injects passion into Ellis’s otherwise mostly nondescript staging. His gorgeously historic referencing of Jack Cole’s pelvic-driven jazz movement of the 1930s and 40s comes alive in “Tom, Dick, or Harry” as Bianca entertains her suitors (a terrific trifecta of Corbin Bleu, Will Burton and Rick Faugno). Carlyle also takes advantage of Bleu’s superior tapping technique in the wildly inventive “Bianca,” which evokes Fred Astaire’s ceiling dance “You’re All the World to Me” but without the camera tricks. “Too Darn Hot,” featuring Bleu along with James T. Lane, also sizzles, but these fleeting moments aren’t enough to compensate for the mostly lifeless faces of the ensemble while their bodies are wholly expressive.

Scenic designer David Rockwell delivers an expected backdrop to the proceedings, but nothing surprising in terms of perspective or detail. Donald Holder’s lighting design bathes the stage in saturated hues, while Jeff Mahshie’s costumes offer requisite flair. Even so, as this latest iteration of Kiss Me, Kate takes residence at the legendary Studio 54, I wish that it possessed some of the groundbreaking energy and antics of its nightclub predecessor.