Top Posts
‘Company’ to Hit the Road on North American...
Meet the Full Cast of ‘Shucked,’ Coming to...
Full Cast for ‘Parade’ Announced
Stephen McKinley Henderson Gives the Performance of His...
The McKittrick Hotel Announces the Return of ‘The...
Broadway Stars Honored with Academy Award Nominations
Taylor Trensch, Danny Wolohan, and More Join the...
A Gay Road Trip Comes to The Brick...
Maude Apatow of ‘Euphoria’ is the Next Audrey...
Tony Award Winners to Star in ‘Hercules’ at...
Home Beyond Broadway Kokandy Productions’ ‘Head Over Heels’: A Rough Road to Arcadia But Worth the Journey
Beyond BroadwayReviews 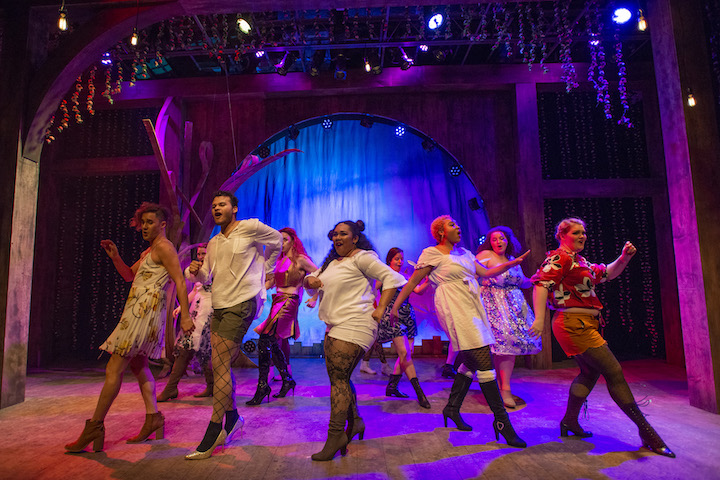 There’s a moment in the first act of Head Over Heels when young shepherd Musidorus (Jeremiah Alsop) disguises himself as a woman to be closer to his love, the princess Philoclea (Caitlyn Cerza). Upon donning a two-piece dress and a long red wig, he studies his body with an expression not of revulsion — as this story often goes in musical comedy when a man dresses as a woman — but of absolute wonder. “Beautiful,” he sings. “Beautiful.”

Though its Broadway run didn’t last long, Head Over Heels is filled with positive moments concerning sexuality and gender. There are more queer couples than straight (and in this production, even a triad). Characters proudly sport frocks, trousers and high heels no matter their presentation. The most powerful person in the play announces themselves as “non-binary plural” (to the audience’s wild applause on opening night of Kokandy’s Chicago premiere). Combining The Go-Go’s florid ‘80s girl-pop with the 17th-century story The Arcadia was a gamble – one that may have fared better Off-Broadway – but in most cases, it pays off in dividends.

If only the cast and crew were ready.

In Kokandy’s production, one of the first since Heels closed on Broadway; enthusiasm isn’t the problem. Polish is. Though Uriel Gomez’s costume design is rife with creativity and sparkle, edges of certain garments appear unfinished. (Not to mention that something must be done to age Frankie Leo Bennett’s King Basilius, as he appears too young to have fathered two daughters of marrying age. Gray up his beard. That’s all you need to do.)

Michael J. Patrick’s sound design is still a work in progress, as sometimes the excellent house band (led by music director Kyra Leigh) drowned out the equally excellent vocals. Finally, Heels’ chorus brought a burst of glittering energy every time they were on stage, but the principals’ scenes dragged a bit, adding about 10-15 extra minutes to a show that should clock at two hours. The overall effect was one of still figuring everything out in the space and fortunately, all of the above issues may resolve themselves as the run progresses. 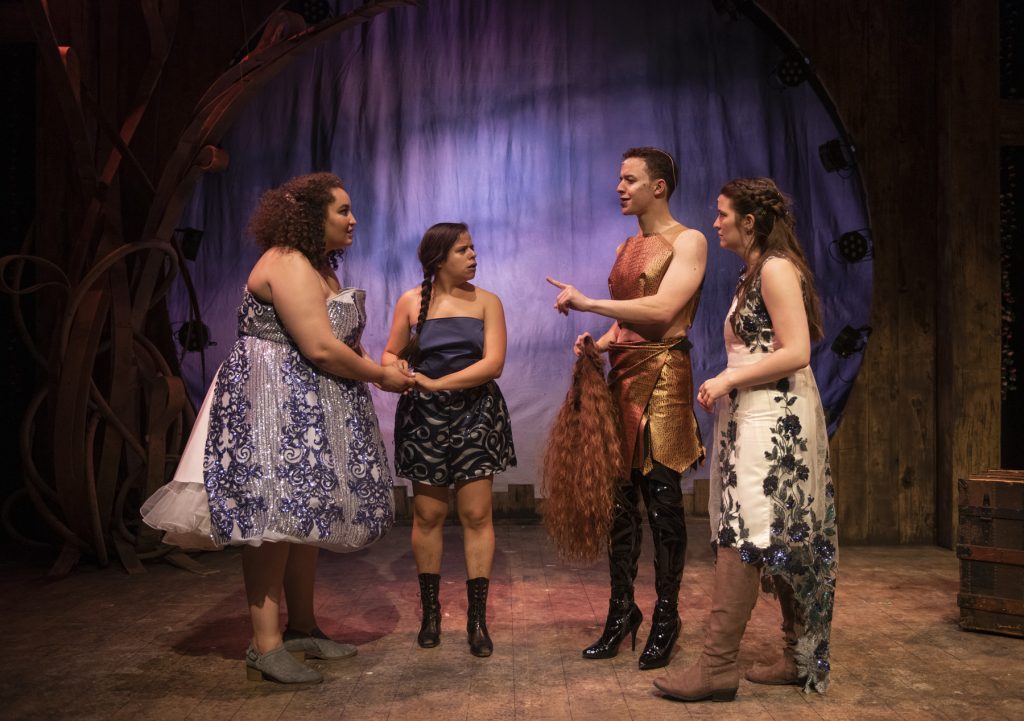 Hopefully, this will happen because there’s so much to love about Head Over Heels, both the source material and Kokandy’s production. Though the setting and language are old-school, the ideas are modern and fresh: love is love, gender is whatever you want it to be (including nonexistent if that’s your jam) and anyone, even stubborn straight men, can change if they are willing to listen and learn. Tom Kitt’s (Broadway’s SpongeBob Squarepants) musical arrangements of familiar hits like “Heaven is a Place on Earth,” “We Got the Beat,” and my personal favorite “Our Lips Are Sealed” supplement the story’s themes with a surprising amount of depth. Even the musical’s satisfying ending has one more delightful twist in store: one I didn’t see coming but then realized had been building up all along.

Co-directors Elizabeth Swanson and Derek Van Barham have assembled a terrific ensemble, all of whom execute Breon Arzell’s boppy choreography with aplomb. Liz Norton is a fierce Queen Gynecia, commanding the stage with everything from high operatic notes to the simplest of hand gestures.

Parker Guidry climbs ladders and rocks evening gowns as the nonbinary oracle Pythio, the role that trans star Peppermint played on Broadway, and Alsop’s Musidorus nearly steals the show with a glorious rendition of “Mad About You.” Bridget Adams-King, seen last summer in Underscore Theatre Company’s Haymarket, puts her vocal prowess and endless charisma to work as confident princess Pamela – props to the directors for casting a plus-size woman of color as the girl everyone wants, reinforcing that beauty isn’t reserved for the thin and white.

Is Head Over Heels worth the steep-by-Chicago-standards ticket price ($35-$40)? Yes. Despite its slightly rough opening, Kokandy’s production of this sweetly offbeat jukebox musical oozes loveliness. Moreover, Head Over Heels sets an example for revivals and new shows alike: let’s see queer couples dancing together in every show. As The Go-Go’s sing, they got the beat.