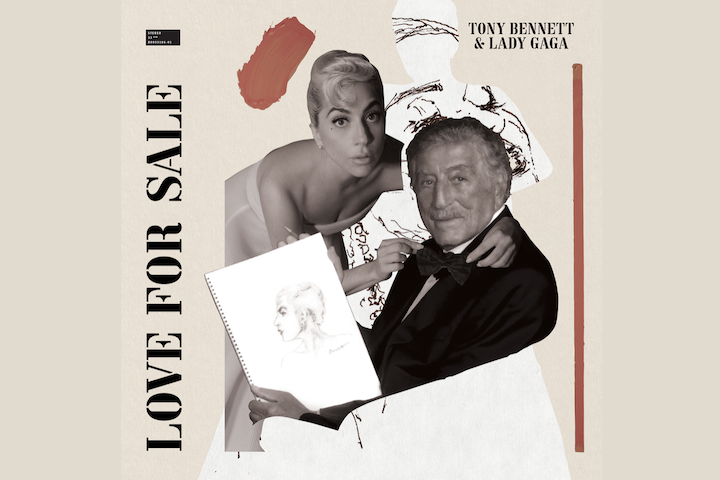 What’s old is new again, as Lady Gaga and Tony Bennett reunite for another album, this time of Cole Porter classics.

Cole Porter, the iconic Broadway songwriter who came to personify the wit and sophistication synonymous with New York, is celebrated by two of the world’s greatest vocalists with their new album, Love For Sale. This album will be the final studio recording of Bennett’s legendary career spanning an astonishing eight decades and is the culmination of Bennett and Gaga’s ten-year recording history.

Cole Porter was born in Peru, Indiana, in 1891 and died in Hollywood 73 years later. In between, he wrote some of the most memorable songs ever heard on stage or screen. During the 1930s, his most productive decade, he provided a series of sparkling scores for such hits as Gay Divorce; Anything Goes (currently being revived on London’s West End); Jubilee; Born to Dance; and Red, Hot and Blue. He achieved his greatest commercial success in 1948 with Kiss Me, Kate. His name remains synonymous with wit and sophistication to this day.

The Cole Porter Trusts commented, “Representing the masterworks of Cole Porter’s legacy is both a supreme honor and an enormous responsibility. It requires the utmost dedication to both protecting Cole’s artistic vision and ensuring his music will continue to be listened to and loved by future generations.  Tony Bennett and Lady Gaga singing and celebrating Cole’s music on their new album, Love For Sale, provide a perfect example of how to achieve those lofty goals in a way we are very proud to support.”

The first single from the album, “I Get a Kick Out of You,” was released on Tony Bennett’s 95th birthday celebrating the first night of Bennett and Gaga’s two sold-out shows at Radio City Music Hall in New York this past summer.

Love For Sale is available now in standard, deluxe, vinyl and cassette configurations, as well as a highly collectible box set edition at ladygaga.com. Fans can order the deluxe version of Love For Sale here on CD and Vinyl exclusively through Target, featuring two bonus tracks, “I’ve Got You Under My Skin” and “You’re The Top.”