Top Posts
‘Company’ to Hit the Road on North American...
Meet the Full Cast of ‘Shucked,’ Coming to...
Full Cast for ‘Parade’ Announced
Stephen McKinley Henderson Gives the Performance of His...
The McKittrick Hotel Announces the Return of ‘The...
Broadway Stars Honored with Academy Award Nominations
Taylor Trensch, Danny Wolohan, and More Join the...
A Gay Road Trip Comes to The Brick...
Maude Apatow of ‘Euphoria’ is the Next Audrey...
Tony Award Winners to Star in ‘Hercules’ at...
Home Beyond Broadway Last Chance: “The Landing” at The Vineyard Theatre
Beyond BroadwayReviews Julia Murney and David Hyde Pierce in “The Landing” at The Vineyard Theatre. (photo: Carol Rosegg)

Extended through November 24, it’s your last chance to see a charming (albeit somewhat melancholy) new musical at The Vineyard Theatre. The Landing features book and lyrics by Greg Pierce and music by Broadway legend John Kander.

The one-act musical moves swiftly between three scenes: “Andra,” “The Brick,” and “The Landing.” With a cast of four, which includes Tony Award-winner David Hyde Pierce and Broadway belter Julia Murney, each story in it’s own way explores the theme of loss. From a young boy longing for a father figure to a stylized fantasy piece and the final scenario in which a gay father sees the cryptic vision of his own future, The Landing gently trots along, with the most tender and honest moments delivered from Pierce.

Bobbie, who’s dozens of directing credits span both Broadway and off-Broadway, seamlessly maneuvers the action, while choreographer Josh Rhodes (currently represented on Broadway with First Date and Rodgers & Hammerstein’s Cinderella) makes the most out of pedestrian movement and even throws in some ballroom for Murney and Pierce, who joyously meet the challenge. Where The Landing slightly falters is with Kander’s score, which feels more like an exercise than a fully realized piece. It lacks the defining sound of recent works such as The Scottsboro Boys and A Family Affair. It is neither hummable or haunting, yet his astute craftsmanship manages to keep The Landing afloat.

Critics responded somewhat warmly to the show, which has been extended through November 24. And while it may not be earth-shattering theater, catching the likes of such high caliber talent in an intimate setting is not to be missed.

Here’s what the critics had to say…

“Mr. Kander’s music for “The Landing,” which opened on Wednesday night in an elegantly slender production directed by Walter Bobbie, is on a smaller scale. Often it has the chiming simplicity of children’s songs. But linked and woven into the book and lyrics by the young playwright Greg Pierce (in Mr. Kander’s first full collaboration with a new partner since Mr. Ebb’s death in 2004), these innocent melodies shade into sorrow and sourness, a bit like those tinkling music-box motifs so beloved by makers of horror movies.” The New York Times

“Throughout all three [stories], Kander’s music mixes his street-smart show-biz signature with yearning romantic ballads and, here’s the surprise, snatches of rhythmic colors that suggest Sondheim. Pierce’s characters all have detailed, original specificity beneath their everyday lives. Kander recently described his new collaborator as “a present someone gave me.” It appears the gift, in this small package, was also given to us.” Newsday

“Directed with a nimble hand and a full heart by Walter Bobbie, and featuring the talents of David Hyde Pierce (Greg’s uncle) and some lesser-known but similarly facile performers, TheLanding consists of three vignettes exploring love and loss, discovery and disenchantment. The parts are uneven, but the whole is haunting, startlingly original and deeply moving.” USA Today 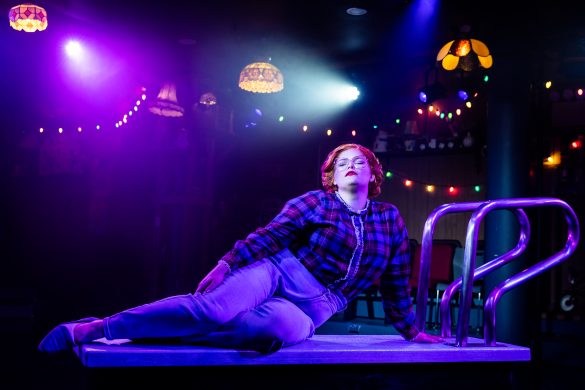