Top Posts
‘Company’ to Hit the Road on North American...
Meet the Full Cast of ‘Shucked,’ Coming to...
Full Cast for ‘Parade’ Announced
Stephen McKinley Henderson Gives the Performance of His...
The McKittrick Hotel Announces the Return of ‘The...
Broadway Stars Honored with Academy Award Nominations
Taylor Trensch, Danny Wolohan, and More Join the...
A Gay Road Trip Comes to The Brick...
Maude Apatow of ‘Euphoria’ is the Next Audrey...
Tony Award Winners to Star in ‘Hercules’ at...
Home Theater Buff Theater Buff: Leroy Church, Broadway’s ‘King Kong’
Theater Buff

Go big or go home! King Kong opens on Broadway this week in a spectacular new production featuring a 20-foot-tall animatronic puppet weighing in at 2,000 pounds. But there’s more to this majestic musical than its title character. The Broadway Blog’s editor chatted with ensemble member Leroy Church about his Broadway debut and what it was like to audition and now perform in this spectacular new show. What was your audition experience like for King Kong?
I auditioned in June of 2017. I had never felt more connected to a project at a call. I just knew I booked it. It was at my birthday party when my agent called to let me know I was on “hold.” I had no idea what this “hold” meant.

Fast forward to October… still no word. I saw there were EPAʼs for King Kong. (An Equity Principal Audition — basically an open call).  I went to the call and sang. After I finished, I was in the lobby getting myself together to leave and casting came out to talk with me. “Why are you here, you didnʼt talk to your agent?” My agent had called me two days before to let me know that I had booked. I missed that call. When I called back, I spoke to a different agent about another gig. So basically, I auditioned for the show even after booking it!

There have been three major King Kong films (1933, 1976, and 2005) — confession: have you watched any/all of them and, if so, have they given you any inspiration?
Confession: the only King Kong movie I ever saw was after being in the show. I watched Skull Island on Netflix. It was interesting, and I found some inspiration for my sailor character in the show.

Can you offer us a sneak peek of some of the various roles you play as an ensemble member?
As an ensemble member of King Kong, I get to play a New Yorker, a casting director, sailor/dock worker, a cobra, a performer in a show within the show, and a producer. How would you describe director/choreographer Drew McOnie’s movement style? Are there hints of the 1930s or other historical touches that make the physicality unique?
Drew’s movement style is organic, swag, and contemporary — also very circular, dynamic, physical, gutsy, and demanding. You had better be in shape! What’s most unique is he has found a genius way of using fresh movement concepts while staying true to this classic 1930s piece. Its history is told in a fresh way. Every single movement has a purpose and a story. We don’t just turn, kick and look pretty.

The Broadway is one of Broadway’s largest theaters (befitting King Kong!) — what are your feelings about making your Broadway debut and working in the heart of Times Square in a venue with such history?
To be making my Broadway debut at this historic theatre is beyond a dream come true. I just wanted to make it to Broadway period. I was blessed to find my way in this larger than life show in one of the largest theaters. Somebody pinch me! If I wasn’t a performer, I would be:
I would probably be a lawyer. Still putting on a show but in a courtroom.

Places, Intermission or Curtain Call?
Curtain call. The roar of the audience at the end of the show sends chills through my body. I feel like they accepted a piece of my heart that I shared on stage that night.

The best post-show cocktail in New York City is at:
Hold Fast on 46th Street between 8th and 9th Avenue. It’s the people, the vibe, the atmosphere and most importantly they serve the best wings in the world! You have to get the Alabama white sauce. One order is never enough!

If I could live anywhere else in the world it would be:
Brazil! The people are beautiful, the beaches are gorgeous, the food is amazing. It’s heaven on earth. When I’m looking for a date, nothing attracts me more than:
A sense of humor. I love a good laugh. I also love a good smile. I’m not in love if I’m not laughing.

My favorite website to visit that you may not have heard of is:
mrworldpremiere.tv
I get to catch up on all my favorite shows I missed while in all-day rehearsals at King Kong.

People would be surprised to learn that I . . .
My guilty pleasure is watching a heartfelt movie/show and just going full-on ugly cry. Cathartic. This is Us (ABC) usually gets the job done.

Ten years from now I’d like to be:
I’d like to be married, traveling the world, laughing and smiling ear to ear without a care in the world. I would perform when I wanted and only work for fun and pure enjoyment. 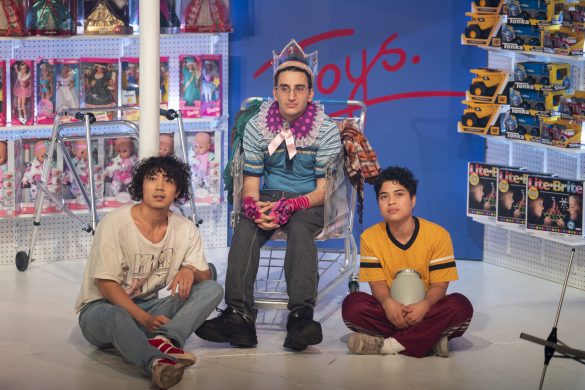