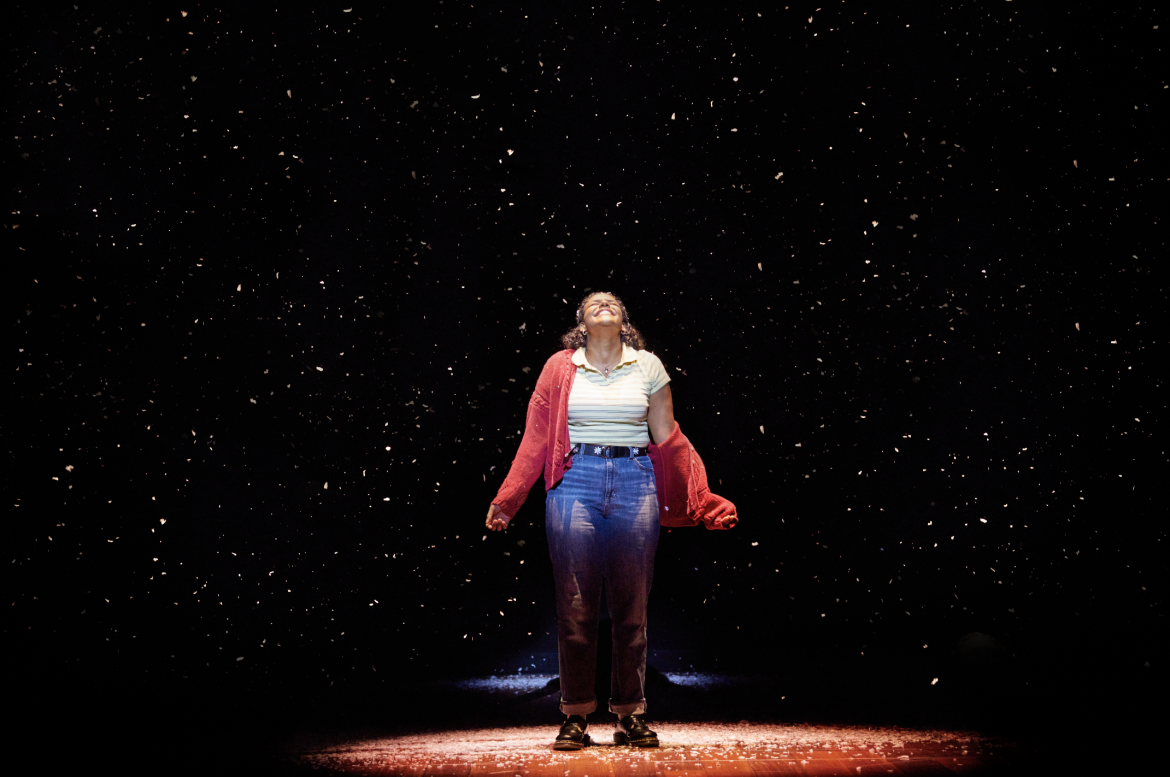 Grief is hell. Losing a loved one is never easy, especially as a young person whose beloved parent is suddenly ripped from their life — and on a pivotal birthday, no less. Composer and lyricist Britta Johnson began writing Life After as a teenager, partially inspired by the loss of her own father. After successful runs in Johnson’s native Ontario, Canada and in San Diego, Life After makes its Chicago premiere at the Goodman Theater with a stunning production design and a cast that is nothing short of stellar. The musical itself, helmed by theater and film director Annie Tippe, is a solid first work for Johnson, who has a bright future ahead.

Alice (Samantha Williams) is a typical 21st century teen, more interested in crushing debate tournaments than hanging out with her dad, Frank (Paul Alexander Nolan). Sure, he’s flown in special for her sixteenth birthday, but as a celebrated motivational speaker and bestselling author, Frank is constantly on the road, which Alice resents. When Frank is killed in a car accident that night, in a desolate part of town where he had no business driving, Alice becomes obsessed with solving the mystery of her father’s death, which she’s certain is her fault. Will Alice find what she’s looking for? Or will she finally have to acknowledge the sudden, and tremendous, loss?

Life After’s character list is small but mighty: the major players in Alice’s teenage life and a trio of Furies (Ashley Pérez Flanagan, Lauryn Hobbs, and Chelsea Williams) serving as a Greek chorus by vocalizing Alice’s most tumultuous thoughts and portraying various characters such as Frank’s fawning groupies, Kiwanis Club members and most hilariously, a Mean Girls-esque “cool mom.” By centering the musical on a smart, thoughtful teenager who is blindsided by death — and determined to unlock its “mystery” at all costs — Johnson gives us a fresh, realistic take on a complex journey that no human can avoid. The script and score are strong, though Life After is very much a debut work of a still-green creator who has passion and talent in spades but hasn’t quite mastered the skill of outside perspective on one’s own work, which comes with time and experience. Rife with ballads, dream-sequence production numbers, and plenty of tearful monologues, the show is almost overwhelmingly earnest in the way only a first-time composer can make it.

Though Life After could be produced on a much smaller budget, it’s a joy to see a production rendered with mainstage resources. Todd Rosenthal’s set design — a full two-story house, complete with staircase, and a host of family photos — is spectacular, a big space appropriate for Alice’s big feelings. The cast is a flawless ensemble of triple threats, from Broadway veteran Williams (who barely leaves the stage for 95 minutes) to the trilling Furies to Lucy Panush, whose turn as Alice’s awkward, show choir-loving friend Hannah is both sweet and heartbreaking. Though it’s not a perfect product, Life After is a strong first work for Johnson, and I look forward to seeing what she does next.

Lauren Emily Whalen is a 2018 alumna of the National Critics Institute and author of the young adult novels TWO WINTERS and TAKE HER DOWN. For more, visit laurenemilywrites.com.