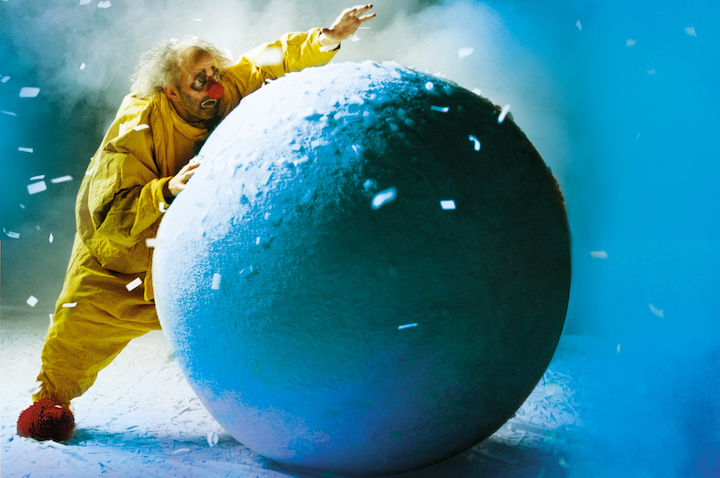 Two productions offer limited-run alternatives for family audiences headed to New York City this holiday season, but are they work the big-ticket prices? The Lightning Thief – The Percy Jackson Musical and Slava’s Snowshow hope to snag theatergoers that may have already checked Aladdin, Frozen or Wicked off their Broadway bucket list. But that’s where the comparison may end for some hoping to see the sparkle and pizazz of a big-budget show.

That’s not to say that these new additions don’t offer various degrees of creativity. Still, when top ticket prices clock in at $225 (Slava’s Snowshow) and $197 (The Lightning Thief), respectively, it can be a tough sell compared to their flashier neighbors. 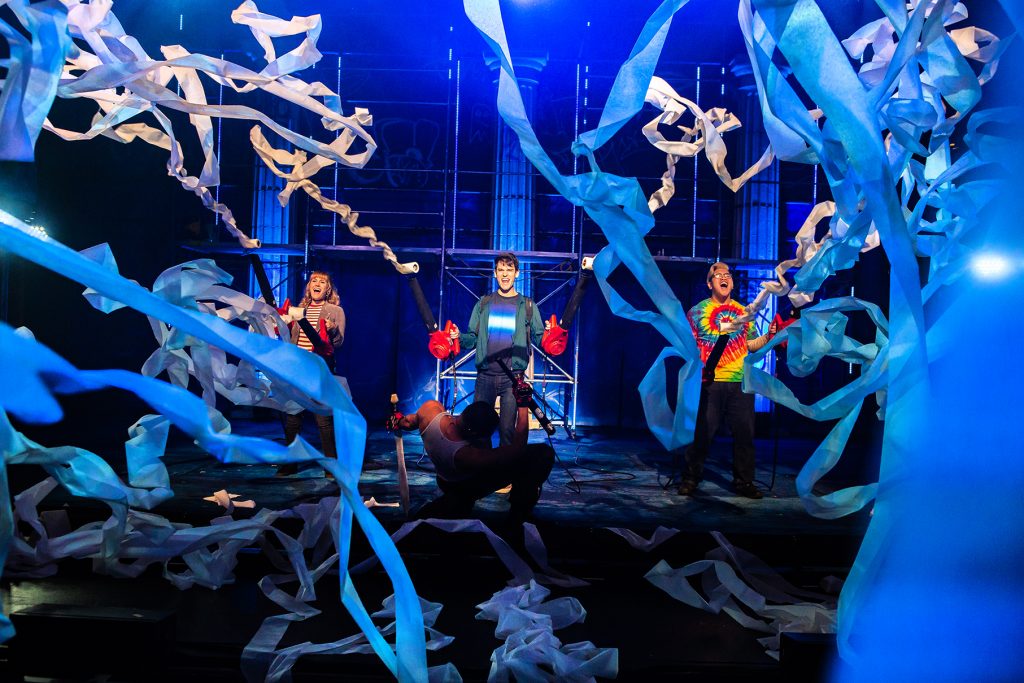 The Lightning Thief, based on Rick Riordan’s five-part best-selling YA book series, follows the title character’s journey (played with enthusiasm by Chris McCarell) after he discovers that he’s his dad is a Greek god. Joe Tracz (book) and Rob Rokicki’s (music and lyrics) libretto weave various myths with a sharp balance of Greek mythology 101 and pop-centric tunes.

TheaterWorksUSA commissioned the work, which premiered Off-Broadway in 2017. Scenic designer Lee Savage reimagines his multi-purpose scaffolding set (think RENT for 12-year-olds) for the Longacre Theatre, as does costume designer Sydney Maresca. Achesonwalsh Studios is credited for new puppetry designs, which give The Lightning Thief a magical, other-worldly quality.

Unfortunately, The Lightening Thief suffers from the same fate (perhaps due to the same director Stephen Brackett and sound designer Ryan Rumery) as Be More Chill, which is an unrelenting, and mostly unwavering energy and decibel level that is ultimately its Achilles’ heel. The musical’s most compelling moments are when its authors play with integrating Greek mythology into the narrative, such as “The Campfire Song,” when Percy’s tween friends bemoan their godly lineage:

My mom’s Demeter, Goddess of grain
She gets excited when it starts to rain…
For their sixteenth birthday, my friends got a car
I got a fern in some dumb mason jar. 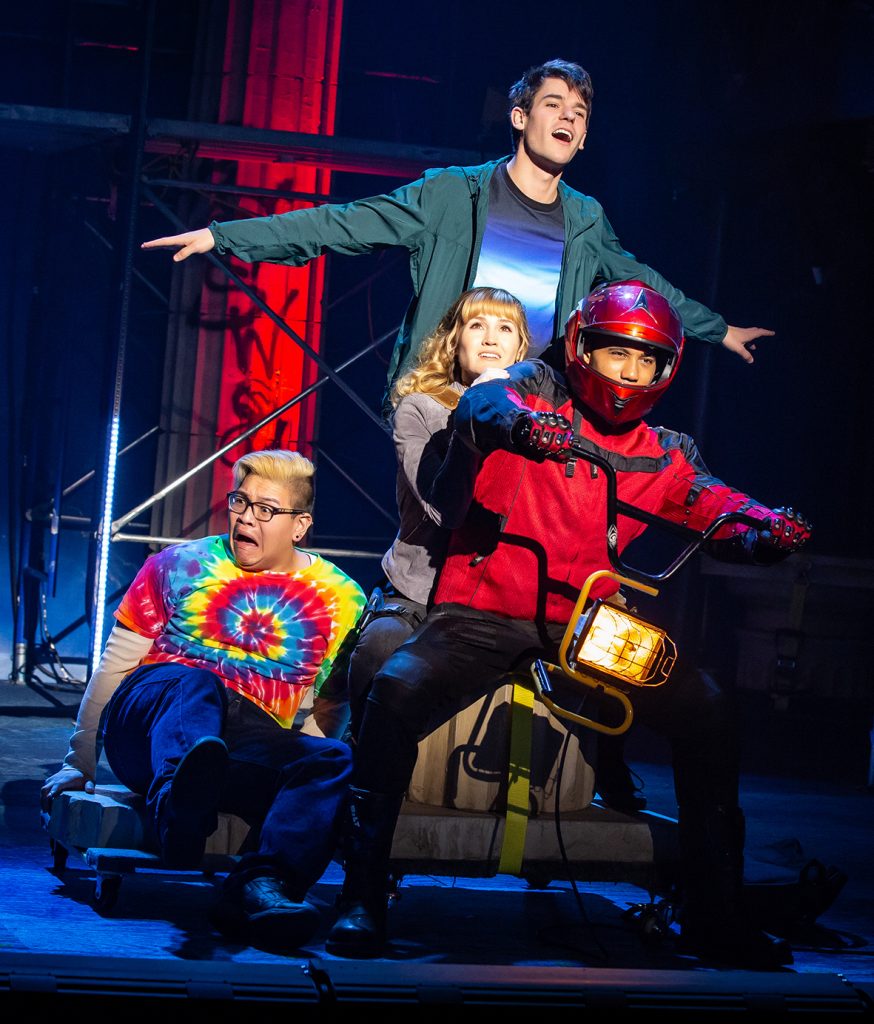 The seven-member cast embraces a revolving door of multiple roles, with Ryan Knowles having a particularly good time as a Paul Lynd-inspired Hades and a beach bum Poseidon that could have sauntered in from Escape to Margaritaville.

Fans of The Lightening Thief book series might find this super-charged adaptation palatable, but for mere mortals, it’s perhaps best lost rather than found. 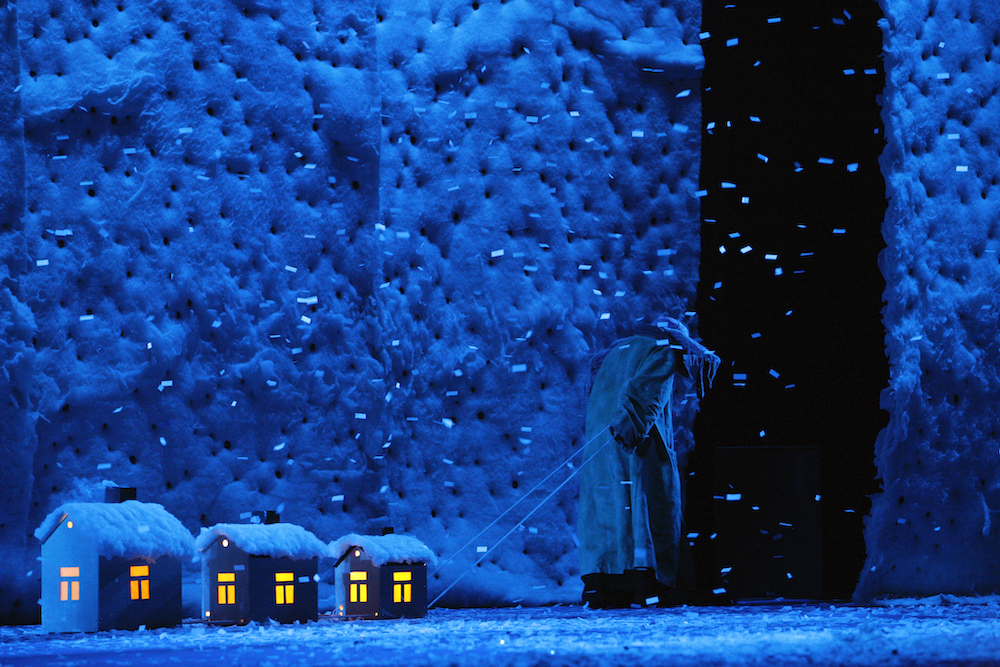 What’s old is new again as the perennial favorite Slava’s Snowshow returns to New York City. It’s been 26 years since master clown Slava Polunin first performed what has now become a worldwide sensation. And to a great degree, it holds up. Polunin masterfully intersects the melancholy with the magical as he and his troupe move their way through various scenes that speak to the universality of the human condition.

The rippling effect of a child’s laughter on opening night reminded audiences of our universality. With only a jumble of nonsensical words spoken, Slava and his cohorts convey a breadth of emotions. Typical antics also make an appearance, such as harmless splashes of water, as well as interactive moments, including a massive spider-like web that stretches over the audience and the blinding, grand finale snowstorm followed by a cacophony of oversized beach balls bouncing their way among standing revelers.

The mash-up score features a collection of classical compositions and jazzy tunes ranging from Ravel’s “Boléro” to Henry Mancini’s “Peter Gunn” (with a bit of Beethoven for good measure), each setting the tone for the troupe’s precise physical comedy.

Polunin, along with Viktor Plotnikov, is credited for scenography, and it’s here that Slava’s Snowshow looks dated rather than timeless. Large quilted panels encompass the stage but feel more like leftovers from a shopping spree at Michaels arts and crafts supply store rather than adding to a sense of wonder.

Still, Slava’s Snowshow undeniably captures the craft of clowning, which for those who have dedicated years to mastering physical comedy, is no laughing matter.