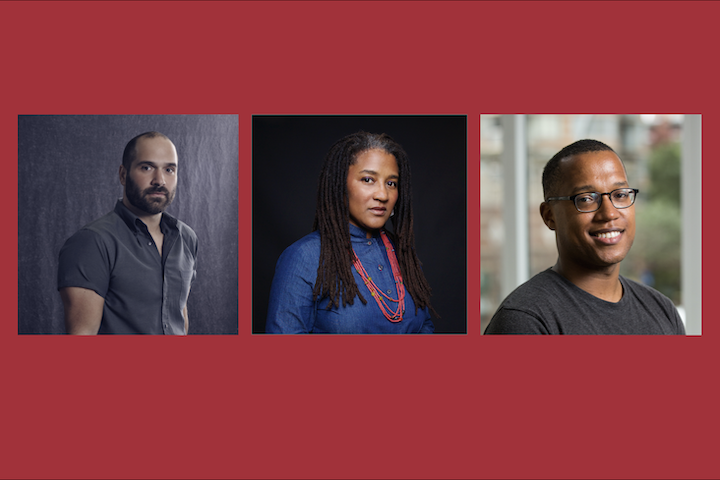 Bigger can be better. At least that’s the message Lincoln Center Theater is sending with the announcement of its new artistic initiative: The Beaumont New Play Commission Program.

Size and scope have long been the Achilles’ heel of playwrights, often forced to contain their works to a limited number of actors or technical requirements due to the limitations of most theaters. Enter Lincoln Center, who is engaging today’s leading playwrights to create works specifically for the Vivian Beaumont Theater – LCT’s Broadway, Tony Award-eligible house. The program’s first commissioned playwrights are Branden Jacobs-Jenkins, Lynn Nottage and Marco Ramirez.  Additional writers will be announced.

The Beaumont New Play Commission Program will give writers the opportunity to create new work for a large canvas, taking advantage of the size and breadth of the Vivian Beaumont stage (the third largest in New York after the Metropolitan Opera and Radio City Music Hall), as well as providing the production values and resources afforded to a Beaumont production.

“I believe that we are in a golden age of American playwrighting and Branden, Lynn and Marco are three of the finest writers at work today,” said André Bishop, LCT’s Producing Artistic Director. “We can think of no better way to inaugurate this program than to engage these three artists to use their imagination, creativity and passion to create new works for the Beaumont stage.”

More About the Playwrights

BRANDEN JACOBS-JENKINS’s plays include Girls, Everybody, War (LCT3), Gloria, Appropriate, An Octoroon, and Neighbors. A Residency Five playwright at Signature Theatre and a 2020 Guggenheim fellow, his honors include a USA Artists fellowship, the Charles Wintour Award, the MacArthur fellowship, the Windham-Campbell Prize for Drama, the Steinberg Playwriting Award, and the inaugural Tennessee Williams Award. A proud member of the Dramatists Guild council, he serves on the boards of Soho Rep and the Dramatists Guild Foundation and is an Associate Professor of Practice at the University of Texas at Austin.

LYNN NOTTAGE is a two-time winner of the Pulitzer Prize for Drama for her plays Sweat (also Evening Standard Award, Obie Award, Susan Smith Blackburn Prize, and Tony and Drama Desk Award nominations for Best Play) and Ruined (also New York Drama Critics Circle, Drama Desk, Outer Critics Circle, Lucille Lortel, Obie, and Audelco awards for Best Play). At Lincoln Center Theater, she wrote the libretto for Intimate Apparel, an opera based on her award-winning play of the same title, with music by Ricky Ian Gordon. Her other plays include Floyd’s, Mlima’s Tale; By the Way, Meet Vera Stark; Fabulation, or The Re-Education of Undine (Obie Award); Crumbs from the Table of Joy; Las Meninas; Mud, River, Stone; Por’knockers; and POOF!.

Nottage’s musical credits include the book for the upcoming musical, MJ and the book for The Secret Life of Bees with lyrics by Susan Birkenhead and music by Duncan Sheik, which premiered at Atlantic Theater Company.  She produced and conceived of This is Reading, a performance installation based on two years of interviews at the Franklin Street Reading Railroad Station in Reading, PA.  Recipient of a MacArthur “Genius Grant” Fellowship, Steinberg “Mimi” Distinguished Playwright Award, PEN/Laura Pels Master Playwright Award and the Merit Award from The Academy of Arts and Letters.

Nottage is the co-founder of the production company Market Road Films, whose most recent projects include Unfinished/Deep South (Podcast) and is developing the documentary Takeover, about the Young Lords takeover of Lincoln Hospital and A Girl Stands at the Door, a multiple part series on the history of school desegregation. She was a writer/producer on the Netflix series She’s Gotta Have It, directed by Spike Lee.

MARCO RAMIREZ’s play The Royale was produced at Lincoln Center Theater in 2016 under the direction of Rachel Chavkin; the production was honored with a Drama Desk Award nomination for Best Play and Mr. Ramirez received the Outer Critics Circle’s John Gassner Award for playwrighting.  He is a recipient of Juilliard’s Lila Acheson Wallace Playwriting Fellowship. A Writers Guild of America and Emmy Award-nominated TV writer, his credits include “Sons of Anarchy” (FX); “Orange is the New Black” and “Daredevil” (Netflix).