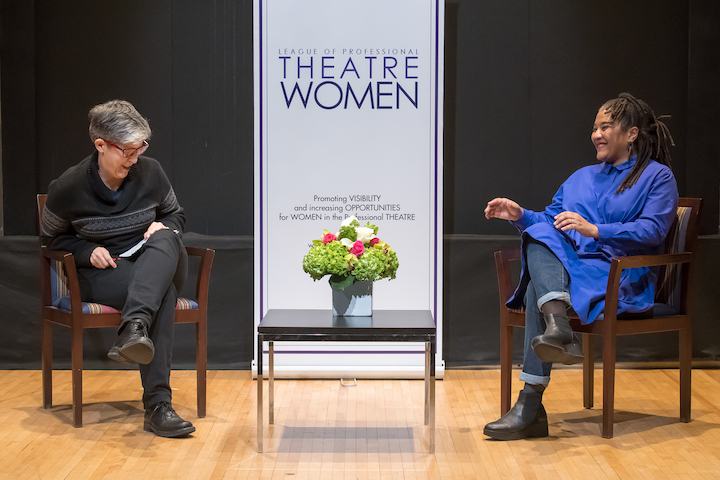 An eager audience gathered at Bruno Walter Auditorium on Monday, February 4 for a conversation between playwright Lynn Nottage and critic Elisabeth Vincentelli. The event was part of the Oral History Project of the League of Professional Theatre Women, which champions women in theater.

“Few playwrights have shown such ambition but also such humanism in their depiction of people on stage, with all their complicated stories, their foils, and their fraught relationships,” said Ms. Vincentelli.

Ms. Nottage’s accolades include the Doris Duke Performing Artist Award, an Obie, a Lucille Lortel, a MacArthur Genius Fellowship and The American Academy of Arts and Letters Award. She’s the only woman to have won the Pulitzer Prize for Drama twice: first, for Ruined, set in the African Congo, and later for her drama Sweat, about poverty in Reading, Pennsylvania. The success of Sweat led to the creation of This is Reading.

“I spent all this time in Reading forging complicated relationships with people, and I didn’t want to be a carpetbagger,” said Mrs. Nottage. “I wanted to create something very connected to the people in Reading and make use of all of these interviews I did that didn’t filter into the play. So the year after Sweat I decided to do this massive installation in the Reading Railroad Station, abandoned since 1981. We thought it was going to be difficult… but the guys just said ‘here’ and tossed us the keys.”

The installation charted the decline of Reading to inspire a dialogue on class, and their Fall 2018 mobile tour of the Rust Belt brought the show into union halls, churches, and school gymnasiums. Growing up in Boerum Heights, Brooklyn in the 60s­, Ms. Nottage was surrounded by people pushed out of other neighborhoods. She said, “as an aspiring writer, it was the best place to grow up because it was diverse and accepting, a true community.”

After attending the High School of Music & Art, she went to Brown University, where she was encouraged by renowned playwright Paula Vogel. After a stint writing for The Villager, she was accepted to Yale School of Drama.

Graduating during the AIDS crisis and crack epidemic, she invested four years on social justice issues at Amnesty International. Calling it her second grad school, Ms. Nottage said, “I knew what I wanted to do as an artist when I left.” Prompted by Galan Fajardo’s photos of battered women, she wrote Poof!, winner of the Heideman Award.

“It’s a short play about an abused woman who tells her husband to go to hell,” recounted Mrs. Nottage. “He spontaneously combusts into a pile of ash. She calls her best friend over to discuss what to do with the pile of ash. They decide to sweep it under the rug.”

The synthesis of human rights and playwriting, Poof! proved she could do both, which “for me was incredibly liberating.” She followed it in 1995 with the political satire Por’Knockers, and Crumbs from the Table of Joy. Her Mud, River, Stone premiered in 1996, soon after her mother died of Lou Gehrig’s disease, leaving her as sole caregiver to her grandmother. And a photo of three generations of her family prompted a “very personal investigation” to reconstruct her great-grandmother’s life. The end result was 2003’s Intimate Apparel, a look at the relationship between Esther, a black New York seamstress circa 1905 and a Jewish fabric salesman. Her 2004 Obie-Award winning play Fabulation, or the Re-Education of Undine, is its companion piece, set 100 years later.

“I wrote the play for my mother, and Fabulation became my escape, the place where I went to when I didn’t want to cry,” said Ms. Nottage.

Other hits include By the Way, Meet Vera Stark, about a headstrong African-American maid and a fading Hollywood star, and Mlima’s Tale, told by an elephant poached for ivory. In March 2018, it premiered at The Public Theater and was nominated for the Outer Critics Circle Award. A new production is playing through March 10 at Signature Theatre.

Ms. Nottage nurtures new playwrights as an associate professor at Columbia University. She’s currently working on an operatic adaptation of Intimate Apparel while writing a musical adaptation of Sue Monk Kidd’s The Secret Life of Bees with musician Duncan Sheik. And fans of the King of Pop will be thrilled to learn Ms. Nottage is writing the book for a musical about Michael Jackson’s “Dangerous World Tour,” to premiere at Chicago’s Nederlander Theater this October.