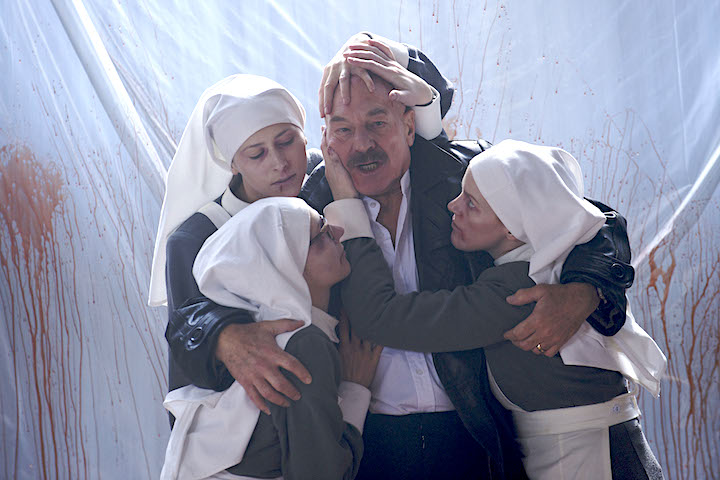 Dripping with blood, director Rupert Goold’s bleak and dystopian production of Macbeth, filmed for BBC Four starring Patrick Stewart and Kate Fleetwood, is a visceral way to mark what would have been William Shakespeare’s 456th birthday.

Premiering at the Minerva Chichester Festival Theatre in the UK, eventually making its way to Broadway in 2008 and now available for streaming on BroadwayHD, this production terrifies like the best modern horror films: isolation, brutal murder, blood and guts, fascism and sexual manipulation intertwine with iambic pentameter for a thrilling ride.

Filmed entirely at Welbeck Abbey (a North Nottinghamshire monastery dating back to 1140), most of the action takes place in dark and decrepit tunnels and strangely empty cold stone rooms. Very rarely do we see the outdoors, and when we do, it is usually filled with soldiers on the attack. This uneasy setting begs the question of why exactly is Macbeth brutally murdering to rule a festering hole of inequity? Which is exactly the point. 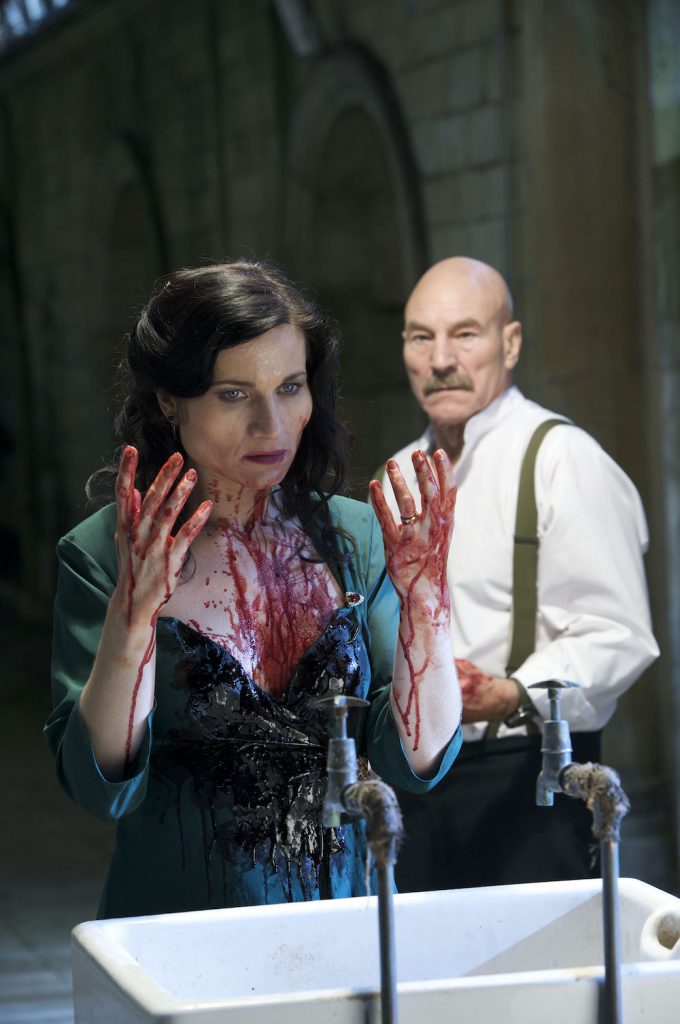 Gore and mistrust surround this world of Macbeth. The witches appear as bloodthirsty nurses and servants. Bolstered by jump cuts, they have that awkward and unnatural physicality made horrifically famous in Japanese (and copied by American) horror films. Lady Macbeth (Kate Fleetwood), so serpentine and hideously gorgeous, is enthralled and aroused by death and power until she meets her own demise. Fleetwood and Stewart generate palpable chemistry. The power couple feeds on each other, ultimately succumbing to their own ambitions.

Stewart’s delicious performance devours Shakespeare’s words as he embodies Macbeth’s greed and inevitable downward spiral. As is intended, his last speeches are at once confused and clear, an utter mess and sheer brilliance all at the same time. While Stewart anchors the film, the supporting cast is equally as engaging as this bleak and brutal world crumbles.

So often, we encounter the Bard as grand posturing and art of a bygone era. This version of Macbeth — poignant, grotesque and titillating — feels relevant and is a thrilling reminder of Shakespeare’s century-spanning impact.

Macbeth
Like this? Consider The Tempest starring Harriet Walter and directed by Phyllida Lloyd.
Three’s a Charm: The Broadway Blog has reviewed several productions of Macbeth over the years. Check out what we thought of these past productions: