Top Posts
‘Company’ to Hit the Road on North American...
Meet the Full Cast of ‘Shucked,’ Coming to...
Full Cast for ‘Parade’ Announced
Stephen McKinley Henderson Gives the Performance of His...
The McKittrick Hotel Announces the Return of ‘The...
Broadway Stars Honored with Academy Award Nominations
Taylor Trensch, Danny Wolohan, and More Join the...
A Gay Road Trip Comes to The Brick...
Maude Apatow of ‘Euphoria’ is the Next Audrey...
Tony Award Winners to Star in ‘Hercules’ at...
Home Beyond Broadway ‘Macbeth’ and the Thane of Thrones
Beyond BroadwayReviews 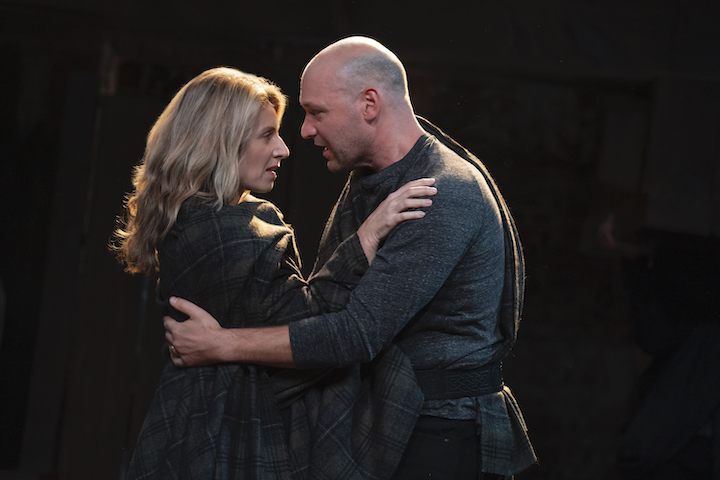 John Doyle, artistic director of the Classic Stage Company, is to stage directing what Jack Spratt is to fat. Usually concentrating on production values (sets, costumes, props, cast sizes, etc.), he cuts away freely to get to the meat of a work’s dramatic quality. Sometimes, though, as in his current, unsatisfactory staging of Macbeth, his slashing (which here includes significant slices of the text) leaves little more than bones.

Doyle’s Readers Digest version, starring the real-life couple of Corey Stoll (Othello, Julius Caesar) and Nadia Bowers (Life Sucks) as Macbeth and Lady Macbeth, attempts to isolate the theme of ambition’s corruptive power by having it strut and fret for an intermissionless hour and 40 minutes. It thus wipes out numerous characters and incidents, playing out on a bare stage with a handful of props, and employing only nine actors for all the roles. This necessitates having actresses, using no gender disguises, play Ross (Barbara Walsh) and Duncan (Mary Beth Peil, Anastasia). 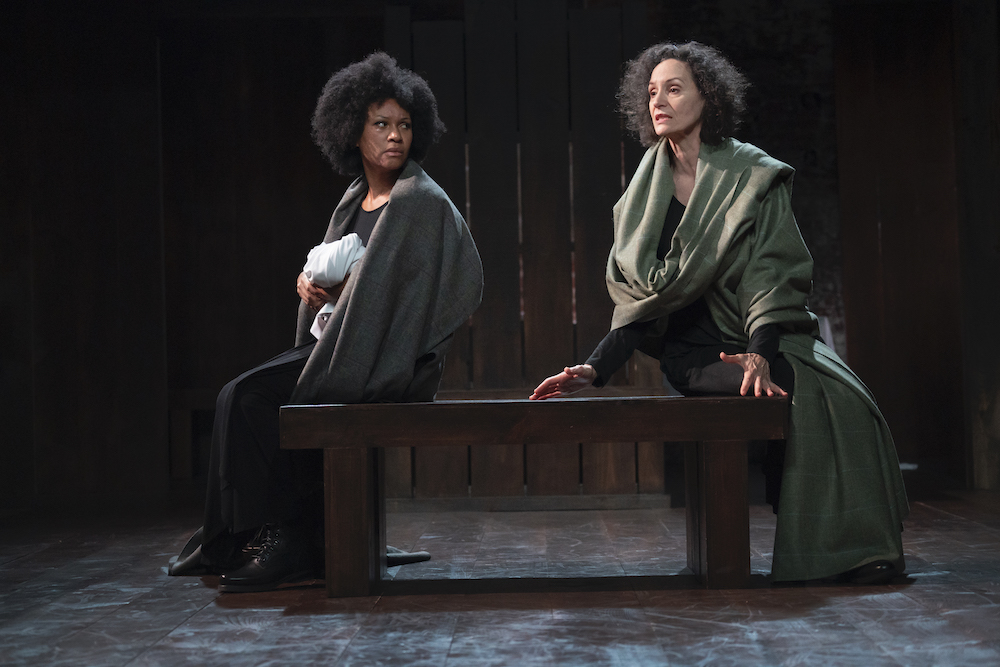 Doyle’s stage — a long, wooden platform that he designed — is surrounded by the audience on three sides, with a high-backed wooden throne (redolent of the Iron Throne on a certain TV series), situated beneath a gallery. So substantial is the throne that it allows Macbeth to slouch, lie, stand, and even climb all over it. Three benches are moved about for various purposes.

Costume designer Ann Hould-Ward dresses the cast in shades of black and gray, with robes, shawls, and scarves manipulated for visual interest, although they fail to lighten the gloom. About the only color present, in fact, is the blood on the Macbeths’ hands, which they wash off in a clear bowl of reddening water that no one else seems to notice.

Costumes aren’t changed to delineate one role from the other, so even those who know the play will now and then be hard-pressed to identify who is who. The ensemble is such that everyone (except Macbeth) may also be a witch. Perhaps the witches’ famous line should be changed to “When shall we eight meet again?”

These choices rob the play of context, removing, for example, the gradual process by which Macbeth, a decent man, finds himself—under the influence of both supernatural forces and domestic pressures—ensnared in the web that leads to his accession and decline. The editing pushes the action forward in sudden leaps that highlight the major scenes and speeches but provide little time to appreciate the matrix of political and personal circumstances. And, with the porter excised, this dour play loses its chief opportunity for humor. 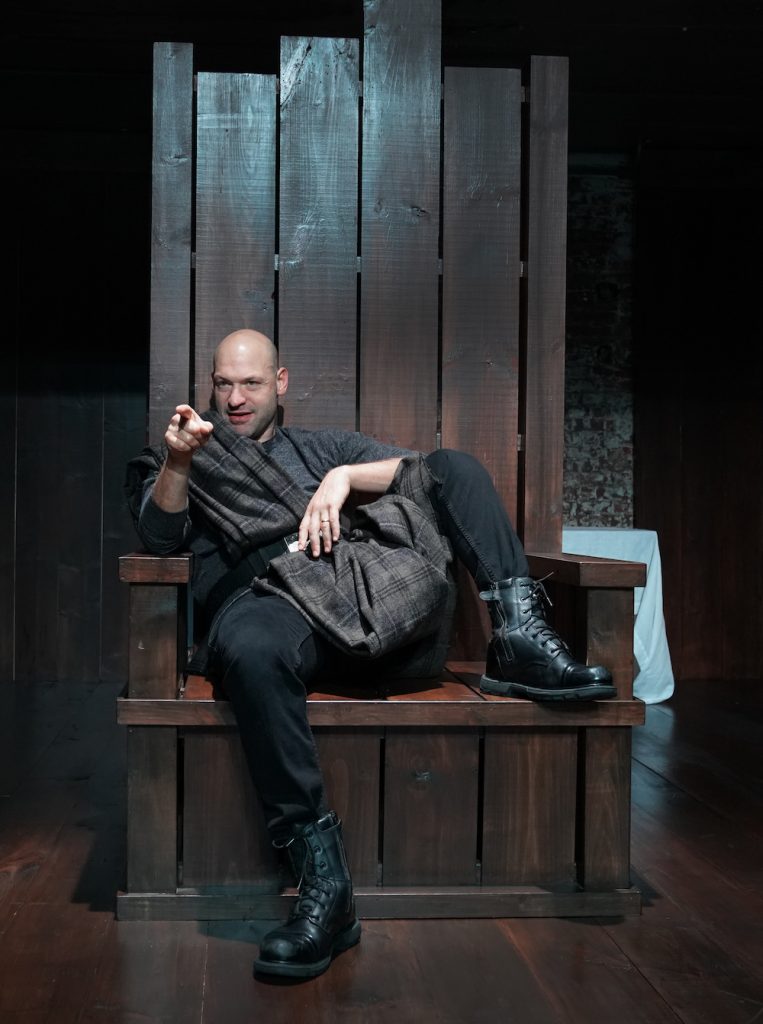 Within this bleakness, the acting’s ordinariness becomes more prominent. Doyle moves things along swiftly, but when a climactic moment arrives and a big monologue is aborning, his actors deliver it seated, kneeling, or lying on the floor, picked out by a spotlight. (Solomon Weisbard, using mainly white lighting, is the designer). Thus, for instance, are Lady Macbeth’s big scenes, from “unsex me here” to “out, out, damn spot,” presented. Few speeches offer resonant insights, about the most original being Macbeth’s soliloquy about time, delivered boringly in a near whisper as he reclines on his side.

Stoll has the bearing and intelligence to play the Thane of Cawdor, but he’s somehow commonplace, missing the man’s dignity and too often descending into whining. His pairing with his own wife allows for some authentic kissing, but little else in his (or her) performance is as convincing. Bowers is an aggressively demanding but unexceptional Lady Macbeth, Peil offers a well-spoken Duncan, Erik Lochtefeld is a respectable Banquo, Barzin Akhavan provides a passionate Macduff, and Raffi Barsoumian makes a noble Malcolm.

Doyle’s Macbeth is full of sound and fury, especially during Thomas Schall’s well-choreographed fights, but the production itself signifies, if not nothing, then that maybe it’s time to give Big Mac a break.