Top Posts
Review: ‘& Juliet’ Is A Daffy, Absurdly Joyous...
Jinkx Monsoon & BenDeLaCreme’s ‘The Jinkx & DeLa...
Review: Victoria Clark Shines in the Refreshingly Original...
Review: Mike Birbiglia Astounds in ‘The Old Man...
A Sondheim Stocking Stuffer: New Book Offers Insightful...
From ‘Tattooed Lady’ to ‘KPOP,’ Plus A Quick...
Museum of Broadway Will Open Its Doors November...
Previews Have Begun for One-Man ‘A Christmas Carol’...
Strong Performances Aren’t Enough to Save ‘Almost Famous’
‘Kinky Boots’ Will Close After Off-Broadway Return
Home Beyond Broadway Boys Will Be Boys: A Trifecta of Burlesque, Cirque and Comedy
Beyond BroadwayReviews 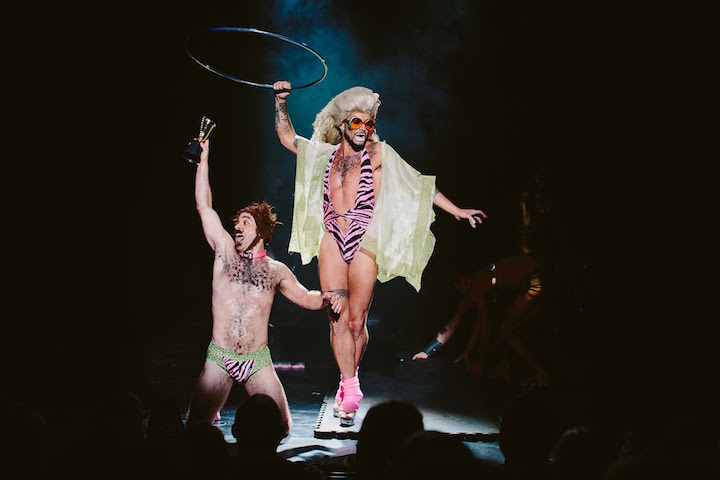 The New Year kicked off with a bevy of boisterous boylesque in New York City, with three separate acts strutting their stuff (in more ways than one) for delighted audiences.

The exact origin of burlesque is debatable, but according to Whore of Yore (why didn’t I think of that?), the mid-17th century saw the emergence French (burlesque) and Italian (burlesco) iterations. It wasn’t until the Victorian era that the striptease as we know it began to take shape.

The circus emerged a century later when “former cavalry Sergeant-Major turned showman” (according to Circopedia) opened Paris’s first circus, the Amphithéâtre Anglois, in 1782.

Take all that history and accessorize it with pop tracks, political humor, gender-bending, and bit of full frontal, and you’ve got a fresh take on classical art forms. Boys’ Night: An All-Male Cirquelesque Revue
Boys’ Night enters its seventh year of titillating theatergoers with its unique brand of burlesque, aerial performance, and drag. Its venue, The Slipper Room, celebrates its 20th anniversary in 2019 as a home for variety performers.

Created and produced by Ben Franklin, Jason Mejias, Joshua Dean and Mr. Gorgeous, Boys’ Night takes over the hall on the first Thursday of every month.

Drag luminary Eve Starr hosted the first performance of the year, and her bawdy yet finely tuned comedy provided an anchor for the evening’s acts. The Slipper Room’s gilded proscenium and limited capacity put nearly everyone close to the action: an eclectic mix of covers and classics to underscore aerial acts including hoops and ropes, as well as a pole dance and good ole’ fashioned strip.

While each performer brought his own RuPaul-esque “charisma, uniqueness, nerve and talent,” Joshua Dean (performing to Dolly Parton’s a capella version of “Little Sparrow”) and Jason Mejias’s French-inspired “Ne me quitte pas” were particular standouts. Performance artists/stripper Tigger! Ferguson also offered his own brand of performance art, which included dropping trousers, reminding us that the Lower East Side still has a bit of an edge. 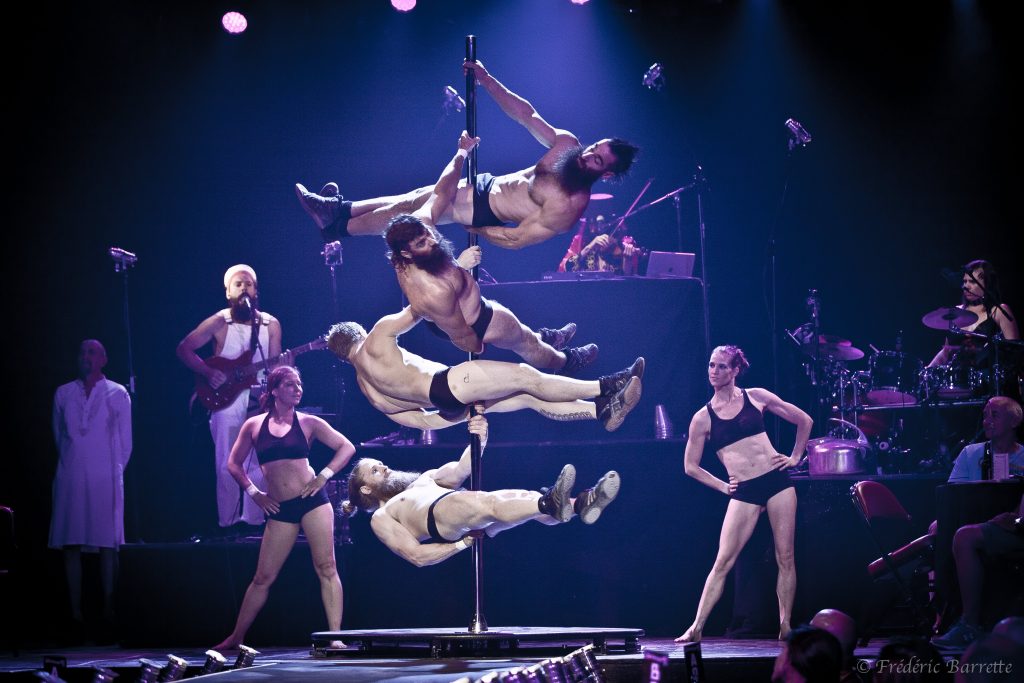 Cirque Alfonse: BARBU Electro Trad Cabaret
“The essence of the circus remains the same,” says Cirque Alfonse’s artistic director Alain Francoeur. “It fulfills a need to witness things that are larger than life or that help us to escape from life’s realities.” 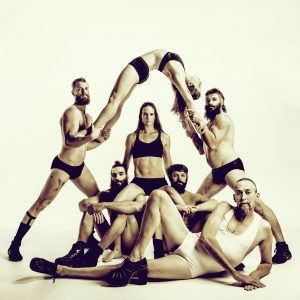 The Canadian troupe’s timing couldn’t be more perfect to help weary Americans temporarily forget about the divisiveness and vitriol. While Prime Minister Justin Trudeau was, unfortunately, not part of the act, there were plenty of handsome Québécois on hand to offer nouveau cirque interpretation. Established in 2005, company members have worked with Les 7 doigts de la main, Cirque du Soleil, and others, but their particular brand of entertainment might be described as lumberjack cool.

The mostly bearded troupe (along with two female members) offered a range of acts at its recent gig at NYU Skirball. The wide proscenium and rather institutional design of the venue perhaps diluted Cirque Alfonse’s cutting-edge vibe (which would prove the same later that week with the arrival of Briefs: The Second Coming), but nevertheless, the live band — driven by hard-hitting electric guitar, sound sampling and a percussive current — reminded the audience that this wasn’t going to be an evening with Barnum & Bailey.

Cirque Alfonse’s modus operandi repeated itself throughout the evening: present the basic skill — whether it be juggling, aerial work, seesaw acrobatics — and progressively increase the difficulty level. This proved particularly captivating with the tossing about of a full beer keg, which spouted a yeasty-smelling spray by act’s end. Lucas Jolly offered a bit of boundary-pushing clowning to the evening’s proceedings, and also contrasted the ensemble’s hyper-masculinity with his high heeled, gender fluid strut.

Fans of Pricilla: Queen of the Desert’s famous ping-pong scene were delighted at the PG-13 version employed in BARBU, while disco divas could revel in a 70s’-inspired Cyr wheel number.

As a whole, BARBU felt a bit choppy with little narrative or thematic structure to tie the evening together, but one can’t deny the athleticism and artistry that these men and women north of the border bring to circus arts. 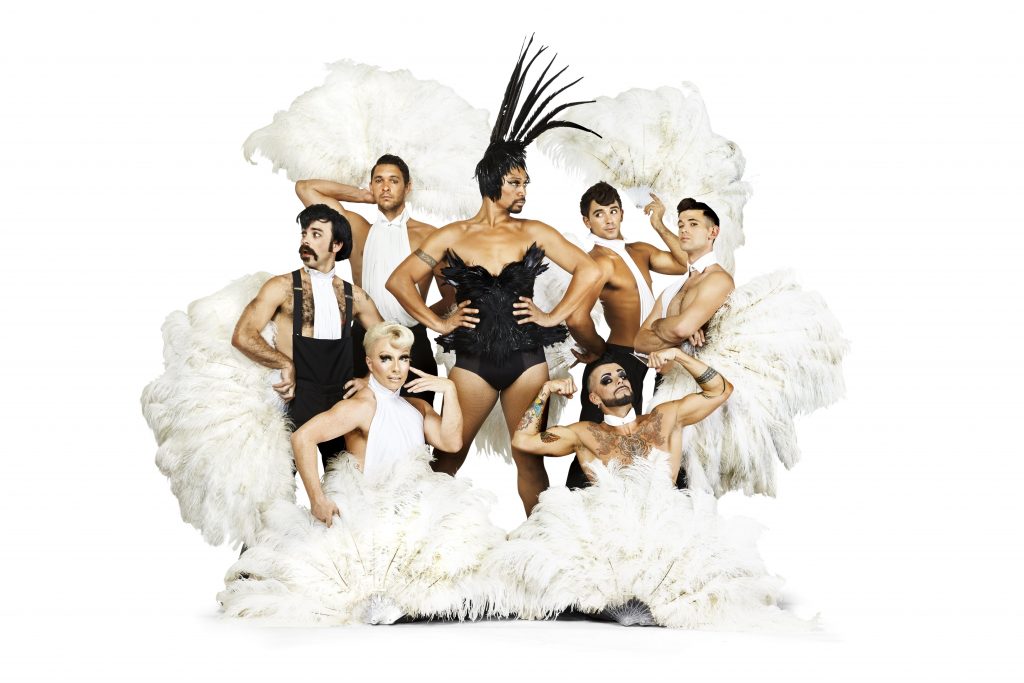 Helmed and hosted by artistic director Fez Fa’anana, Briefs has been trying to land on American soil for nearly a decade, and their determination and perseverance was palpable at their two-night gig at NYU Skirball. Opening with a full ensemble number of pulsating burlesque fans and breakaway costumes, Fa’anana declared the night was going to be “a bit of butch with a f*ckload of camp.” What was promised was delivered. 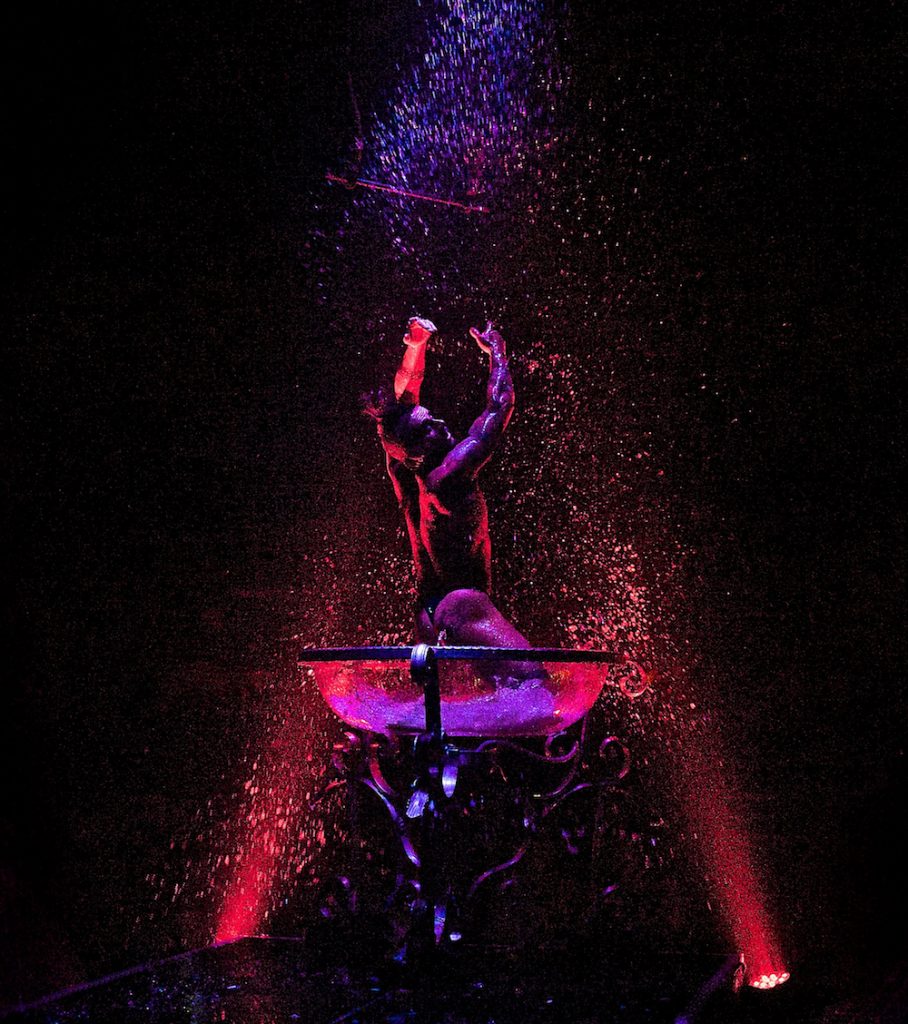 While political commentary is part of Brief Factory’s ethos, their U.S. debut mostly steered clear of the recent nonsense coming out of our nation’s capital. But Fa’anana’s final sequined gown proudly featured both Australia’s national flag and that of its First Nations communities. The potent acknowledgment reminded the audience that communities can unite while simultaneously celebrating their differences.