Top Posts
‘Company’ to Hit the Road on North American...
Meet the Full Cast of ‘Shucked,’ Coming to...
Full Cast for ‘Parade’ Announced
Stephen McKinley Henderson Gives the Performance of His...
The McKittrick Hotel Announces the Return of ‘The...
Broadway Stars Honored with Academy Award Nominations
Taylor Trensch, Danny Wolohan, and More Join the...
A Gay Road Trip Comes to The Brick...
Maude Apatow of ‘Euphoria’ is the Next Audrey...
Tony Award Winners to Star in ‘Hercules’ at...
Home Buzz Breaking News: Matthew Morrison Returns to Broadway in ‘Finding Neverland’
BuzzShow Folk Things are getting murky in Neverland. While it seemed like a sure thing that Jeremy Jordan would reprise his role as J.M. Barrie in the Harvey Weinstein-produced Finding Neverland, it looks like things have taken a turn.

“We couldn’t be more thrilled to see Matthew returning to his Broadway roots and back to the role he created in our workshop,” Mr. Weinstein said. “He is wildly talented and a true leading man.”

Mr. Morrison has previously starred on Broadway in Hairspray, South Pacific, and The Light in the Piazza (for which he was nominated for a 2005 Tony Award).  He is known to television audiences for his Emmy and Golden Globe nominated role as Will Schuester on the hit Fox show, Glee. Morrison has also released two studio albums since 2011, with the most recent being Where It All Began—a collection of standards, many first made famous in Broadway musicals.

Weinstein hinted at a possible casting change last month, when he told The Hollywood Reporter, “Well, I can’t comment about the Broadway cast right now, but I can tell you that, as far as our relationship with Jeremy Jordan, not only did we get involved in 5 Years, but The Weinstein Co. also nominated him at the Napa Valley Film Festival [Jordan will receive the fest’s Rising Star Award] and we also have a television show that is on offer to him and other things. The guy is a phenomenal talent. So one way or another, on Finding Neverland or not, we’re gonna be in business with Jeremy.”

Reason of why Jordan is no longer with the project has yet to be released, but it may have something to do with the release and marketing of The Last Five Years, which hits movie theaters February 13.

Take a peek at Morrison singing “It Don’t Mean a Thing.” 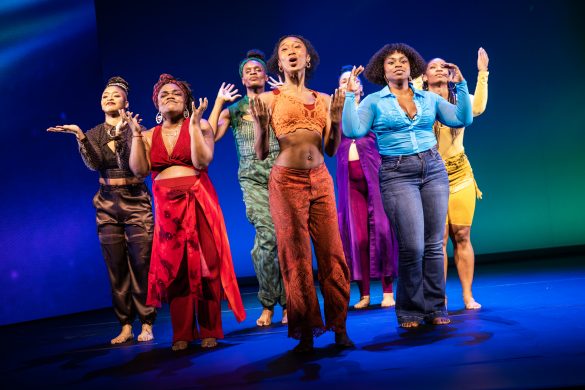