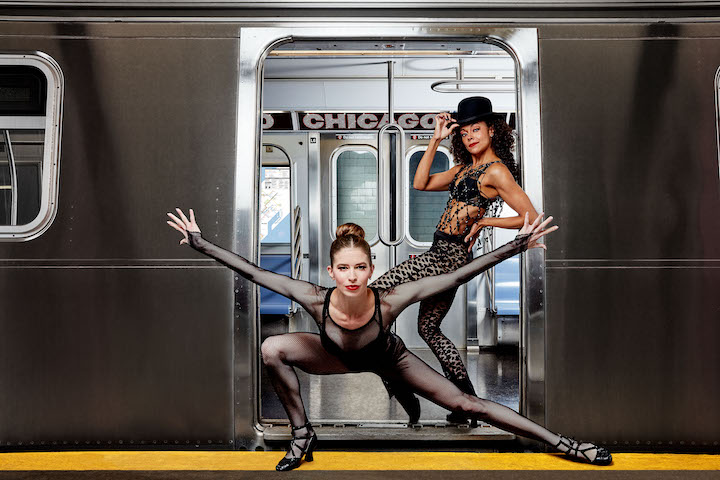 Members of the Broadway company of ‘Chicago’ in an MTA campaign. (Photo: Matthew Murphy)

If you’ve gone to a Broadway show in the past few years, there’s a good chance you’ve seen Matthew Murphy’s work. No, he’s not singing and dancing on stage, but he is the photographer and artist behind the artwork seen on Playbills and marquees and editorial coverage: from the glam shot for Diana and the star logo for Hamilton to the Hillard children rocking out with brooms for Mrs. Doubfire. On top of that, Murphy is an esteemed portrait and production photographer — capturing the mugs of celebs from Darren Criss to Lin-Manuel Miranda — but perhaps his most omnipresent work right now resides underground.

Murphy is the photographer behind the “The Only Sure Way To Make It To Broadway” campaign, an MTA series that features Broadway characters riding the subway. After a year and a half of live theater being impossible, the campaign is a glorious ode to artists’ perseverance and the shows that remind us why we love New York. Here, Murphy offers insight into his process, the challenges of that subterranean shoot, and more. 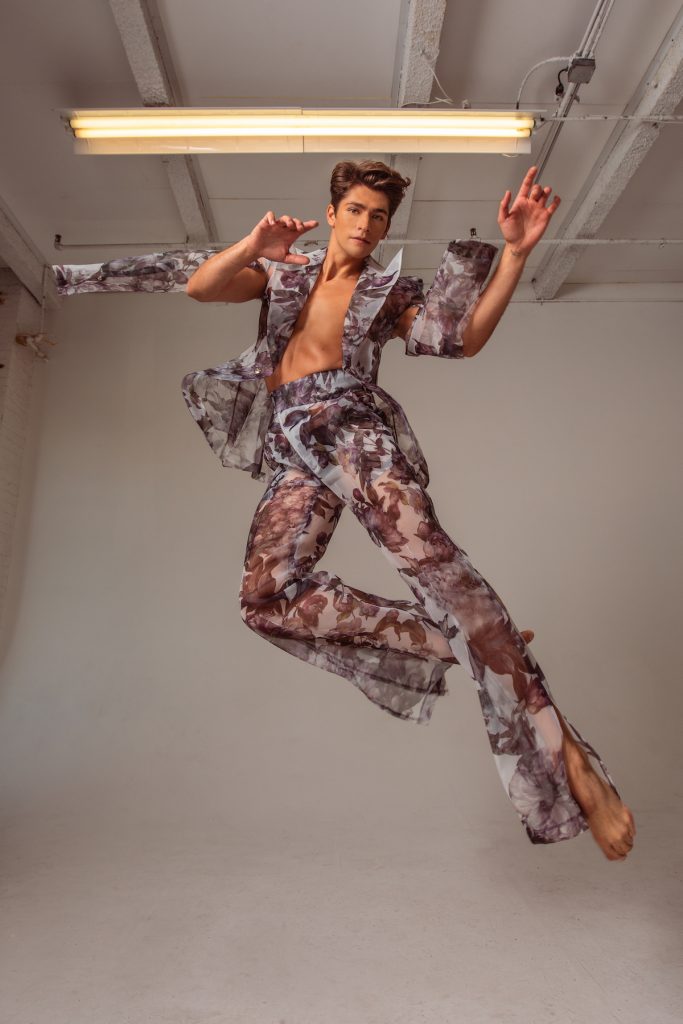 The Broadway Blog: Let’s zoom out before diving in: what came first, your love for theater or photography, and when did the two meld?

Matthew Murphy: I come from a theater family — my dad was a Broadway/TV actor, mom was a dancer, and sister is a dancer — so theater has always been part of my life. A lot of people don’t know this about me anymore because it’s been so long since I retired, but I actually started my career as a professional ballet dancer with American Ballet Theater. (Funny tidbit: on the day of my final audition to join ABT, I actually made sure I had a time that allowed me to make it to the final performance of Dance of the Vampires because…priorities.)

As a kid, I’d come to the city to train, and each summer, I’d devour as many Broadway shows as we could fit into a week. At the time, I didn’t quite register that photography was an interest, but when I look back, I realize how present it was even during my time as a dancer. I took endless photos of the Times Square advertisements for Broadway shows, spent hours poring through souvenir books looking at Joan Marcus’s photos, and then taped all of those to the walls of my dorm room at North Carolina School of the Arts. So while I didn’t pick up a camera until I stopped dancing at 22, looking back, it’s clear that I always had a fascination with the documentation of theater and how photography was used as a tool to get ticket buyers into the seats.

You do it all: production shots, headshots, key art, and more. Do you have a favorite style of work within photography?

I feel so lucky to work in multiple areas of commercial theater photography, and each informs the other. I’m a naturally curious and social person, so I love my time on headshots because I get to know the client in such an intimate setting.

For key art, there’s a certain pressure of figuring out a way to translate a show into a single image (or small set of images) that will encapsulate the essence of the production. But if I really had to pick a favorite, production photography takes the cake; there’s nothing like the adrenaline rush of photographing a dress rehearsal of a brand-new show, experiencing all of the details through the lens before an audience has stepped foot into the theater.

My favorite part of all the different types of photography I do is that they are all truly collaborative; no image of mine you see is possible without assistants, retouchers, shoot producers, stylists, makeup artists, lighting designers, set designers, directors, choreographers, associates, stage management teams, and art directors. I feel beyond fortunate to get to learn from my colleagues on a constant basis. I mean, if my childhood self could see me making conversation with some of these people now, I think he’d self-combust.

“The Only Sure Way To Make It To Broadway” campaign is such a triumph — an amazing celebration of New York City and the return of live theater. What was it like getting asked to put this together?

This campaign holds such a special place in my heart. I’ll never forget the day when we did the unveiling in Times Square, and I took a minute to look around and just be proud of what that little kid from Montana has gotten himself into.

There are so many projects that I quote for and don’t get for one reason or another… I try not to get too emotionally involved until all the stars align. But this was one that the minute I got the email, I felt I had to do it. I needed to be a part of welcoming Broadway back and highlighting some of the artists who are putting their hearts out there every night to bring this vital part of NYC back to life. 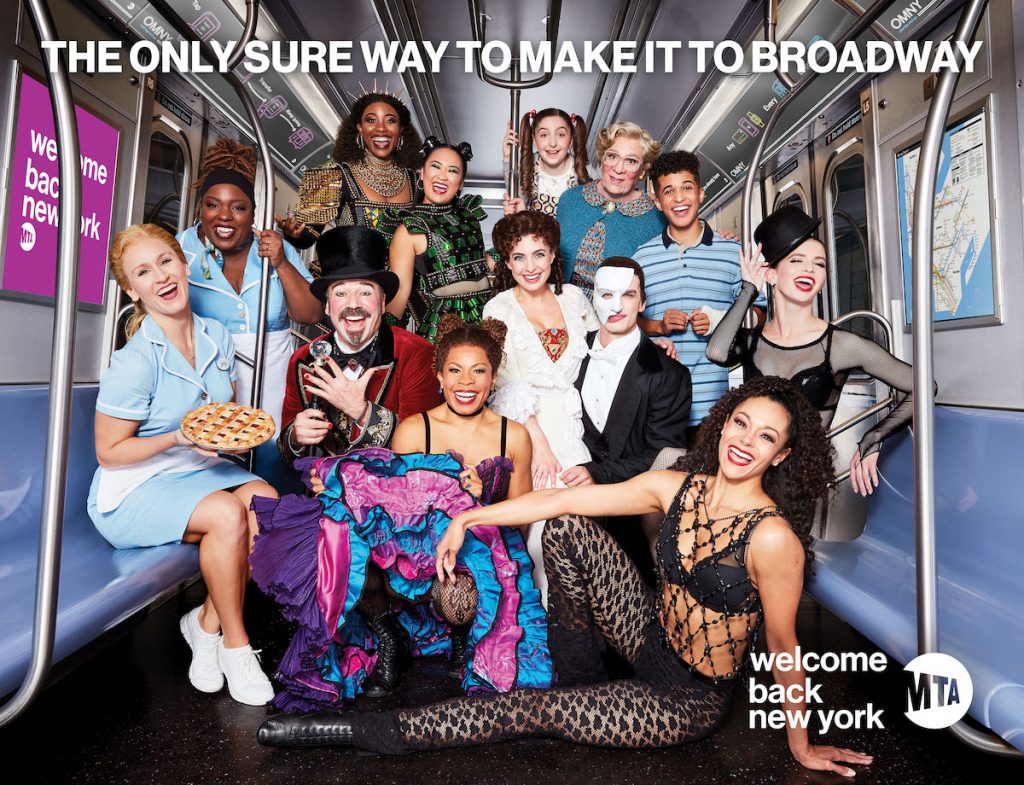 Your Instagram details some of the many technical challenges of this very fast shoot; how did you overcome those?

The challenges for this shoot were honestly hilarious at a point. Who needs power for a photoshoot? Who needs air conditioning in the middle of the summer on a subway platform? Who needs more than a few minutes to get everyone comfortable and get the shot? With the laundry list of challenges facing us, I just had to rely on the fact that my team is spectacular and talented and joyful, and we were going to focus on having a good time despite the odds.

Sure, we sweat our butts off carrying hundreds of pounds of equipment up and down subway stairwells in the midday heat, but after so much time sitting in my house over the past two years, I was able to zoom out and see just how special and once-in-a-lifetime this shoot was, not in spite of the challenges but because of them. Even just the fact that so many shows said yes, and we got all of these different companies together was a huge victory.

Is there a highlight from that shoot? Or perhaps has a highlight been people’s responses to it?

One of the images that is seared in my mind is the moment when we finally got everyone into the subway car, and we shut the doors to keep the air conditioning inside. I looked out onto the inactive subway platform, and I saw all of these people: the costume/hair teams, the press teams, the publicists, the ad agency executives, and I thought, holy shit: how lucky am I to be here with so many people that I can call my friends?

After all of this time, just to be that close to people again and feel a sense of electricity in the air was overwhelming. Then I snapped out of it and got my head back in the game and started finessing the shot because we only had a handful of minutes to get the big hero image done. 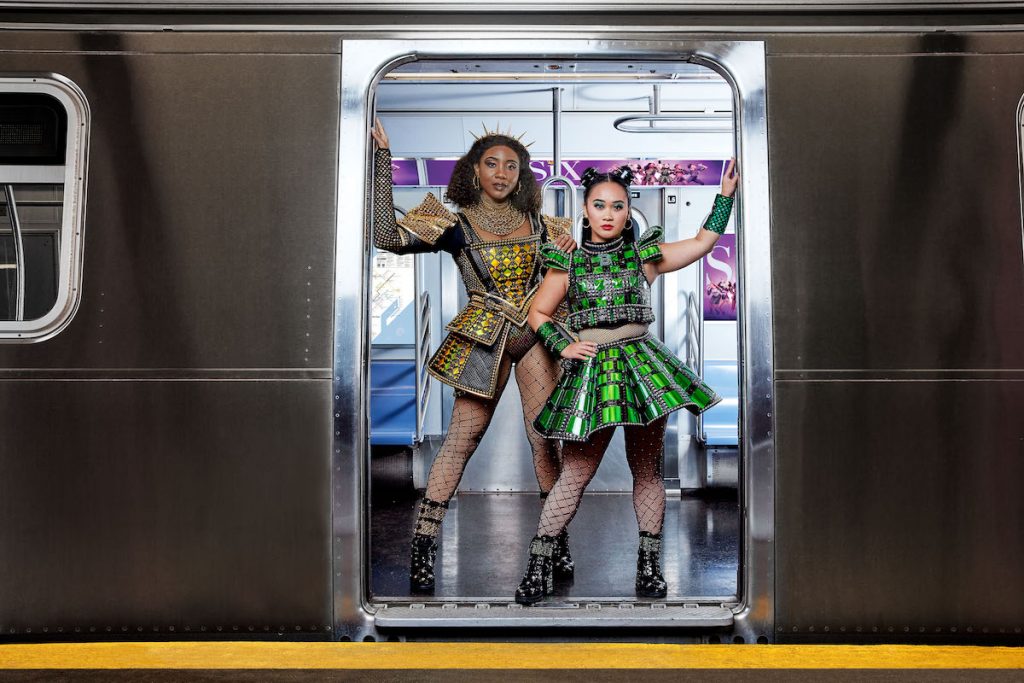 Members of the cast of ‘Six’ in the MTA photo shoot. (Photo: Matthew Murphy)

You’ve shot some iconic key art, from Diana to Hamilton to Anastasia. Is it too hard to ask if you have a favorite from an artistic or personal point of view?

It’s impossible to choose a favorite because it changes all the time. As far as experience goes, I doubt anything will ever surpass working on Hamilton. Drew Hodges, who is himself an icon of the industry and responsible for some of the all-time greatest show artwork, really gave me such a gift when he (for whatever reason) took a leap of faith on me early in my career. He opened so many doors, and by the time we got to Hamilton together, I just felt so fortunate to consider him a friend.

I remember that day so vividly. We photographed almost every single member of the cast, and I worked in tandem with Andy Blankenbueler to shape each of the images. We knew the show would be big, but I don’t think anyone could have anticipated how truly massive it became, so to have played any small role in that show’s legacy will be something for which I’m eternally grateful.

Anything exciting on the horizon, or anything else you’d like to add? Many thanks, Matthew!

I’m just thrilled to be back in the theater again, documenting this period of our lives. It’s difficult, but we will get through it, more informed about our passions and priorities than ever before, and for that, I’m grateful.