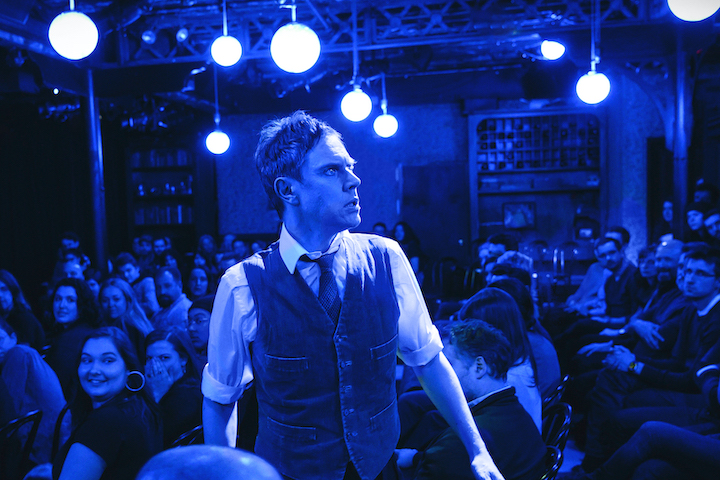 ‘The Woman in Black.’ (Jenny Anderson for The McKittrick Hotel.)

The second-longest running show in the West End’s history has floated across the pond to Manhattan—and it couldn’t have landed in a better venue. The Woman In Black, based on Susan Hill’s 1983 Gothic novel has received several treatments: first, as a stage show in 1989 (where it just celebrated its 30th year anniversary), followed by a 1989 made-for-television event, and a 2012 movie adaptation starring Daniel Radcliffe.

Now, it arrives at the Club Car in the McKittrick Hotel—a space where phantoms and fantasy are continual hot commodities. David Acton and Ben Porter, each of whom have appeared in the London version, bring this ominous tale to life and keep audiences on the edge of their seats for two rapt hours.

Acton stars as Arthur Kipps, an elderly gentleman who has been asked to recall a ghost story from his past. The trouble is, he claims that he is not a good actor. He is not the man who can do this story justice. For that, he enlists the help of a character known simply as “The Actor” (Porter). Together, they adopt several characters as they spin their spine-tingling yarn. Truth be told, Acton is one hell of a fine character—so is Porter.  In less capable hands, this is one story that could fall flat. It has all the characteristics of a British mystery—intriguing, yet often extremely conversational and dry. Yet with this pair in charge, it’s hard not to fixate on the stage, wondering what spook and horror they will next encounter.  Stephen Mallatratt’s adaptation is directed with careful precision by Robin Herford.

What makes The Woman in Black such a great tale rests primarily in the narrative. It is one of the few contemporary plays that doesn’t dumb down its audience. With the specific description of locations, people, and events, it allows theatergoers the chance to imagine all of this in their own minds. This is not a jab at Michael Holt’s sparse set design, but rather a compliment to its subtlety. The rest of the creative team also deserves high praise. Anshuman Bhatia’s lighting effectively shrouds the space in gloom while Sebastien Frost’s sound design envelops listeners in a creepy dystopia. 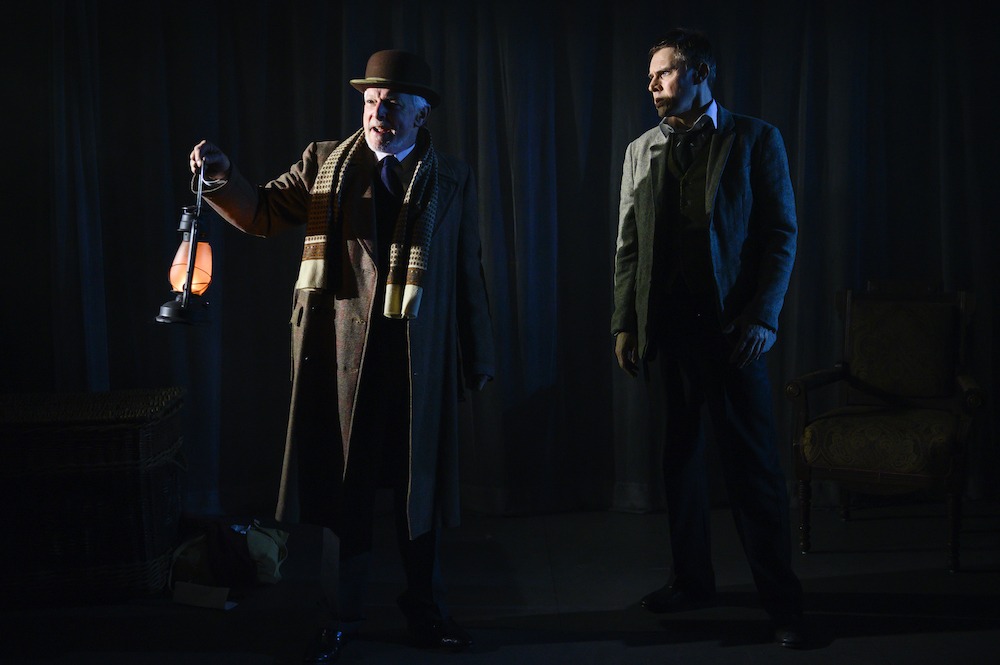 ‘The Woman in Black.’ (Photo: Jenny Anderson for The McKittrick Hotel)

Two drawbacks: the chairs are difficult for long-term sitting and the sightlines are tricky. Given that the space is transformable and not a conventional theatre, it’s an understandable and forgivable offense. You’ll still see enough of this drama that will make you question your own belief in ghosts and the supernatural. In that sense, it draws similar parallels to another recent Off-Broadway show, The Thin Place, which challenged the audience’s beliefs between reality and the afterlife.

Too often, critics tend to hyperbolize the experience of a horror story. The Woman in Black, however, will make you jump and/or scream. Fear not, for you are not alone. A fully stocked bar to the left of the stage, open pre-show and at intermission, will provide you with all the liquid courage you need to endure this popular fright ride. 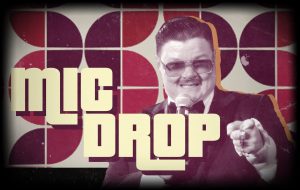 After your nerves are calmed, slink on down to McKittrick’s Manderley Bar for Mic Drop, hosted by Mr. Showbiz, Murray Hill. This outrageous live lip sync battle, held on certain Thursday nights following The Woman In Black, pits two complete strangers against one another for impromptu lip-syncing. Hill’s patter is sharp-witted and hilarious and the prizes are priceless. (Finger puppets, anyone?)  Potations are poured, lowering inhibitions and raising the humor level into the stratosphere. The brave ones are the contestants, but the true winners are the spectators.