Top Posts
‘Company’ to Hit the Road on North American...
Meet the Full Cast of ‘Shucked,’ Coming to...
Full Cast for ‘Parade’ Announced
Stephen McKinley Henderson Gives the Performance of His...
The McKittrick Hotel Announces the Return of ‘The...
Broadway Stars Honored with Academy Award Nominations
Taylor Trensch, Danny Wolohan, and More Join the...
A Gay Road Trip Comes to The Brick...
Maude Apatow of ‘Euphoria’ is the Next Audrey...
Tony Award Winners to Star in ‘Hercules’ at...
Home Beyond Broadway Ashes! Ashes! They All Fall Down in Simon Stone’s ‘Medea’
Beyond BroadwayReviews 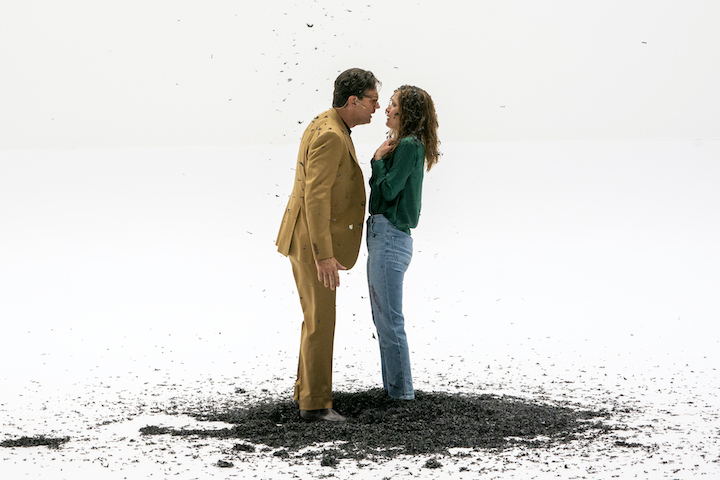 Australian director/writer Simon Stone’s hypnotically absorbing adaptation of Medea, Euripides’ Greek tragedy, now at BAM, features life partners Rose Byrne and Bobby Cannavale in their first co-starring theatre gig (they’ve done several films together). They may or may not evolve into another Lunt and Fontanne, Wallach and Jackson, or Cronin and Tandy, but the fire ignited by their charismatic presence in this harrowing yet sometimes funny Medea gives theatergoers ample reason to hope.

Don’t go, however, expecting a classical revival. Stone (Yerma) has reconceived Euripides’ tale of a wife and mother, who takes vengeance on her unfaithful husband by killing their children and his much younger lover, as a modern domestic drama. Originally performed for Toneel Groep Amsterdam in a production that also played (in Dutch) at London’s Barbican, its American version replicates that staging’s startlingly white, unfurnished set, designed by Bob Cousins and lit with unrelenting intensity by Sarah Johnston. A mid-stage wall occasionally rises to form a large screen for live close-up video projections (reminiscent of the work of another Toneel Groep conceptualist, Ivo von Hove).

Everyone’s names have been changed. Medea is now called Anna. Jason is referred to as Lucas (Cannavale), who leaves Anna for Clara (Madeleine Weinstein), daughter of Lucas’s boss, Christopher (Dylan Baker). Anna and Lucas are doctors and pharmaceutical scientists, her brilliant breakthroughs—like Medea’s assistance in Jason’s obtaining the Golden Fleece—being largely responsible for his success. This is something of which she will furiously remind him in a scorching takedown of his patriarchal prerogatives, screaming, “You took my career away from me!”

Stone’s 80-minute retelling takes its cue from the story of Kansas physician Debora Green, who, in 1995, burned down her home, killing two of her children. His point is to remind us that what Euripides wrote, for all its fantasy elements, is, at heart, no fantasy at all and that humans, even in so-called enlightened societies, are still capable of committing unthinkable horrors.

Anna, released from psychiatric rehab after trying to poison Lucas, remains enveloped in her fatal attraction. She’s dead set on rekindling her life with Lucas, whose affair she’s willing to forgive. “I’m going to win you back,” she declares with scarily cool assurance. He, weak-kneed before her combined seductiveness and volatility, wants nothing to do with her.

But Anna knows her man and, with the serendipitous aid of a child obsessed with his video camera, initiates a situation that—when she finds herself at a psychological precipice—instigates the tragic outcome. Her deed may spring from madness, but we understand where her madness lies.

As the plot unwinds within the open space, scenes morph before our eyes from one to the other, sometimes with characters from another scene still visible. In contrast to the sterile, abstract environment, the acting is distinctly realistic while also rhythmically precise under Stone’s orchestrated direction. Helping enormously is the ominous thrumming of Stefan Gregory’s music and sound design.

Midway through, Stone pulls off an unforgettable coup de théâtre as black ashes fall from above, the slowly descending pillar forming an exclamation point ending in the expanding black dot on the stark, white floor. Symbolizing both the dissolution of Anna and Lucas’s love and the destructive act that brings the drama to its climax, the ashes are either ignored by the actors or, in a bizarre, ironic twist, tossed around playfully as if they were snow. 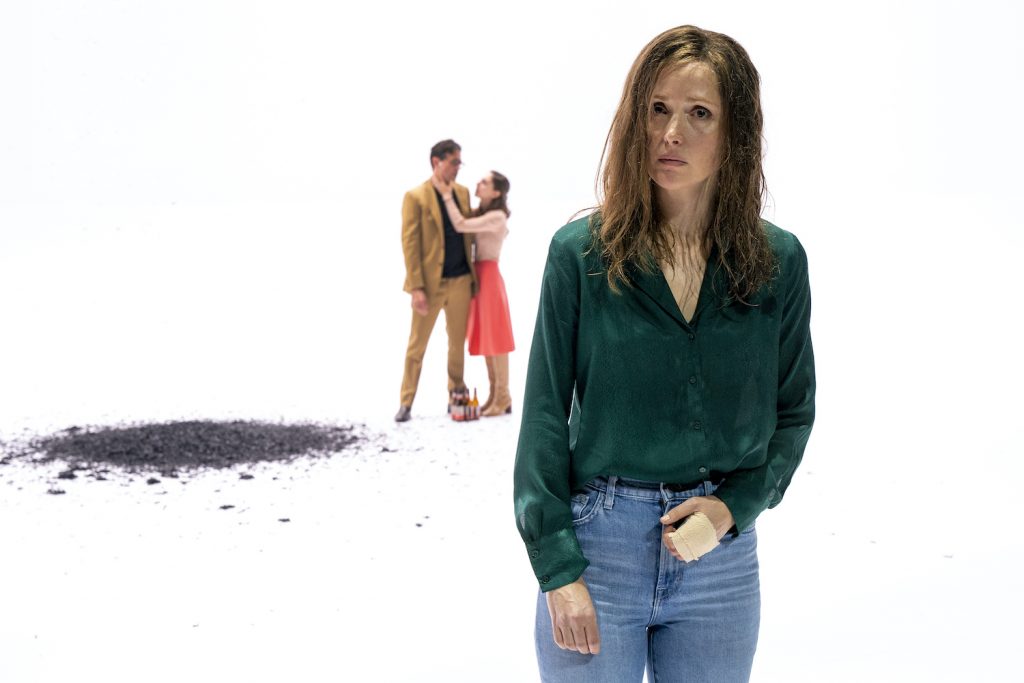 Dressed in unobtrusively stylish garb by An D’Huys, the entire company is fine-tuned to Stone’s calibrations. Byrne, last seen on Broadway in You Can’t Take It with You), reveals explosive power beneath the delicacy of her porcelain beauty. Cannavale (The Hairy Ape) is beautifully natural, making his pain and bewilderment bitingly believable.

Euripides’ play may have been born in 431 BC, but — as this imaginative retelling reveals — its heart still beats.