Top Posts
Stephen McKinley Henderson Gives the Performance of His...
The McKittrick Hotel Announces the Return of ‘The...
Broadway Stars Honored with Academy Award Nominations
Taylor Trensch, Danny Wolohan, and More Join the...
A Gay Road Trip Comes to The Brick...
Maude Apatow of ‘Euphoria’ is the Next Audrey...
Tony Award Winners to Star in ‘Hercules’ at...
‘New York, New York’ Finds its Two Leads
Full Casting Announced for Oscar Isaac-Led ‘The Sign...
Disco Pop Musical ‘Here Lives Love’ to Bow...
Home Beyond Broadway Molly Pope Takes on ‘A Star is Born’
Beyond BroadwayBuzzReviewsShow Folk The music of the iconic 1954 Warner Bros. film A Star is Born— brought vividly to life by award-winning cabaret artist Molly Pope — will return to Feinstein’s/54 Below for a one-night-only encore performance on Wednesday, September 28 at 9:30 p.m..

Debuting in July 2016 to a packed house and standing ovation, songs including “The Man That Got Away,” “Gotta Have Me Go With You” and the “Born In A Trunk” medley will be fully realized in a site-specific presentation at Broadway’s supper club.  Flanked by two song and dance men and backed by a five-piece band, Ms. Pope thrillingly re-examines the triumph and heartbreak of Esther Blodgett/Vicki Lester.  The evening will feature musical direction by Brian Nash, musical staging by Ben Cameron, and staging by Molly Pope.

Molly Pope is a critically acclaimed singer and actor whose shows have played Joe’s Pub, Feinstein’s at the Regency, Ars Nova, The Eugene O’Neill Theater Center, OBERON (A.R.T.), and the Adelaide Cabaret Festival in Australia.  She is the recipient of both the 2016 Bistro Award for “Creative Cabaret Artistry” and the 2016 MAC Award for Musical Comedy Performer for her show “Molly Pope Likes Your Status.”

Pope has been named a Time Out New York “Top Ten Cabaret Act of 2008” and 2012 and a Village Voice Best of NYC 2011 for “Best Singer To Turn Life Into A Cabaret.”  Most recently she recorded her first album, An Audience with Molly Pope, live at Joe’s Pub. Branded “one of downtown cabaret’s most adventurous performers” by the New York Times and hailed as “tremendously entertaining” by The Wall Street Journal, she has also performed at The Cafe Carlyle (“Tales From The Jazz Age”), the Afterglow Festival in Provincetown, The Amber Zone at Sid Gold’s Request Room and “Our Hit Parade” at Joe’s Pub.  Stage credits include Found (Atlantic Theater Co), Horseplay, or the Fickle Mistress (LaMama ETC/Theatre Askew), Dan Fishback’s The Material World (Dixon Place).

A famous scene from the film A Star is Born. 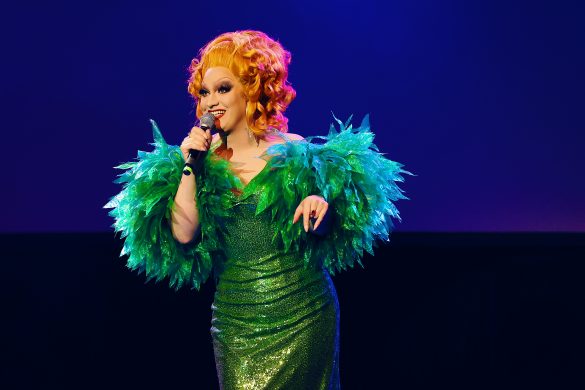