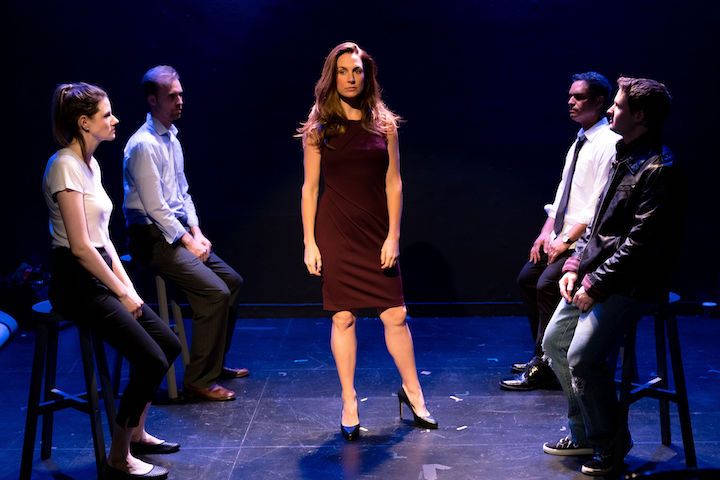 Caroline Kinsolving and the cast of ‘Monica: This Play is Not About Monica Lewinsky.’
(Photo: Katy Beth Barber)

When I was in eighth grade, I cheated on a prepositions test. When Mrs. Orndorff noticed that I had written all 150 prepositions on a small piece of notebook paper, she approached my desk and removed the sweat-drenched sheet from the palm of my hand. “Stay after class, please.” The blood drained from my face. My classmates stared at me in disbelief. In my 12-year-old mind, life was over. I was sure I’d fail English class, thus shooting my chance at college entrance to hell. This, in addition to the shame I’d brought on my family and myself. A cheat sheet. A scarlet letter. A red dress. History has a way of repeating itself.

Monica Lewinsky’s transgression — which occurred several years later and on an enormously larger scale — would reverberate around the world and stick with her for a lifetime. For those unfamiliar, a quick Google search will enlighten you to the scandal that nearly destroyed her. 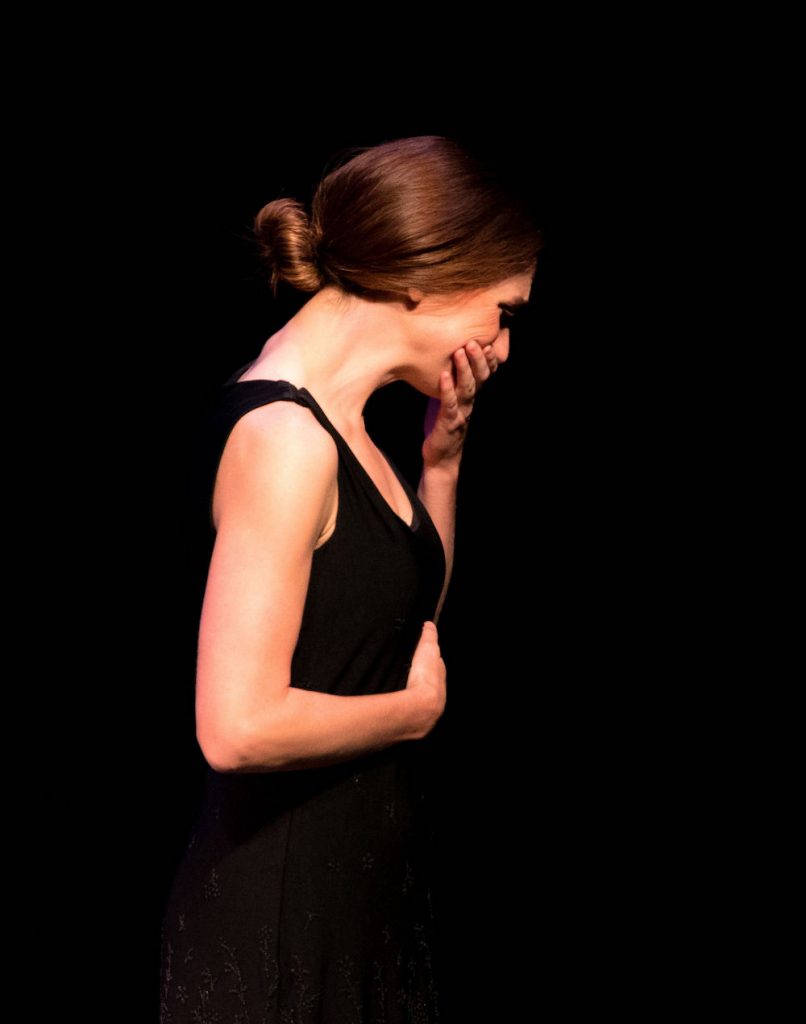 Caroline Kinsolving in ‘Monica: This Play is Not About Monica Lewinsky.’ (Photo: Katy Beth Barber)

Lewinsky is the subject of Monica: This Play Is Not About Monica Lewinsky. Via Brooklyn recently performed Dianne Nora’s 60-minute play at 59E59th Street Theaters in advance of a two-week run at the Edinburgh Fringe Festival. It’s got an appropriate title. For although the main character is Lewinsky (Caroline Kinsolving), this is not an impersonation (much like Hillary and Clinton) of her, nor are the events for which she is known recreated. Instead, the piece is a commentary on how women are treated and disposed of in society.

In general, Nora’s play succeeds. It raises difficult questions that must be answered by those whose entire lives have been minimized by a single event. By characterizing Monica as an “everywoman,” Nora has made her a universally relatable figure.

Chronologically, it is a tad confusing. Projections of news events inform the audience of the time period, but it jumps between 1990 (when Lewinsky was 17 years old) and present time. It’s unclear why the playwright chose to jump around with the frame rather than let the events linearly unfold. Nonetheless, the clips do enhance the otherwise set sparse production.

Monica does not preach, nor does it offer a judgment on Lewinsky. Kinsolving is a commanding performer and plays with Lewinsky’s strength, dignity, and vulnerability — all traits of the real-life person.

In recent years, Lewinsky has openly discussed the trials that were nightly fodder for comedians and news junkies — and she’s come out stronger. “Behind the name, there is a person, and there is a family, and there has been so much pain that has been caused by all of this. It’s so destructive,” she said on national television amid the scandal.

Yet we continue the dangerous cycle of public shaming, now with more demented fervor than ever. With social media, we have the ability to compromise reputations and jobs. In her Ted Talk, Lewinsky shared the statistic that between 2012-2013, there was an 87 percent increase in calls and emails related to cyber-bullying at Childline, a UK phone line that helps young people. To that end, Monica serves as the best public service announcement one could offer for anti-bullying.

“If you kill a man just the one time, does that make you a murderer,” the onstage Monica asks a London expat (Rafe Terrizzi). It’s a solid question. If we make one bad mistake or decision, does it follow us through our entire lives?

Nora subtly suggests that compassion and understanding are far better than criticism and shame. How right she is.

Monica: This Play Is Not About Monica Lewinsky plays August 2-17 at the Edinburgh Fringe Festival.