Top Posts
‘Company’ to Hit the Road on North American...
Meet the Full Cast of ‘Shucked,’ Coming to...
Full Cast for ‘Parade’ Announced
Stephen McKinley Henderson Gives the Performance of His...
The McKittrick Hotel Announces the Return of ‘The...
Broadway Stars Honored with Academy Award Nominations
Taylor Trensch, Danny Wolohan, and More Join the...
A Gay Road Trip Comes to The Brick...
Maude Apatow of ‘Euphoria’ is the Next Audrey...
Tony Award Winners to Star in ‘Hercules’ at...
Home Beyond Broadway Quite Something: ‘Much Ado About Nothing’
Beyond BroadwayReviews 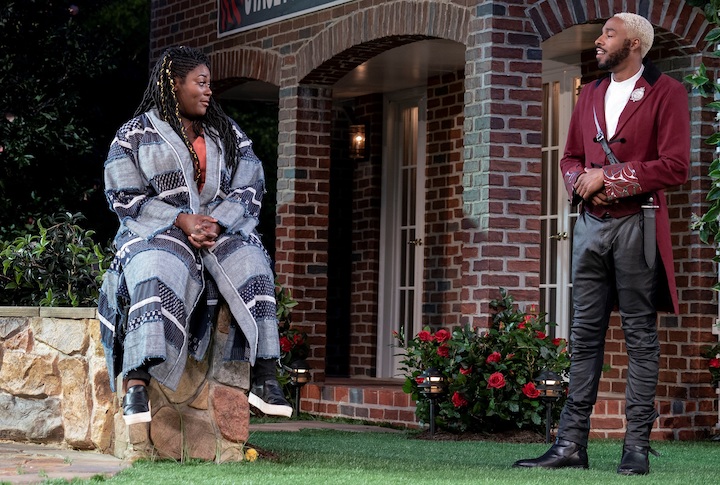 (l to r) Danielle Brooks and Grantham Coleman in ‘Much Ado About Nothing.’ (Photo: Joan Marcus)

As part of its free Shakespeare in the Park summer program, The Public Theater stages yet another rendition of Much Ado About Nothing at the open-air Delacorte Theatre in Central Park. Embracing its longstanding commitment to diverse casting, this production delivers a modern setting with a formidable all-black cast.

Orange is the New Black star Danielle Brooks leads the charge as Beatrice, the sharp-witted (and sharp-tongued) protagonist. Her excellent performance cleverly delivers Shakespeare’s complex verse, fantastic physical comedy, and a singing voice more powerful than one might suspect.

Brooks’ co-star with this quick-moving banter is Grantham Coleman as Benedick, the strutting bachelor who values his freedom and his fellow soldiers more than any woman. Any woman except Beatrice, it seems.

When Benedick’s compatriot Claudio (Jeremie Harris) falls in love at first sight with the fair Hero (Margaret Odette) the two conspire to lure their friends into a similar state of mind. Benedick’s colleagues talk of Beatrice’s secret love for him, aware he’s within earshot. And Beatrice’s cousins make much of his pining away for her, clear that she’s hiding nearby listening. Thereby the match is made.

Don John (Hubert Point-Du Jour) appears as the obligatory bad guy, a meddling bastard brother of the prince who is determined to wreak havoc. He has his men create a pantomime for Claudio’s benefit to appear that Hero has invited a man into her chambers late at night.

Although Much Ado is mostly a comic play, this brings a bit of tragedy into play. For instead of confronting Hero about this supposed dalliance, Claudio waits until they stand before the preacher to disavow her to her family and friends. He cruelly jests at her “maidenly” cries as she’s thrown to the ground, and his rejection is despicable to see. But more so is the ease in which her guardian believes this lie, being that it comes from noblemen. As the Playbill justly remarks, “How easily men make false accusations against women.”

Dogberry (Lateefah Holder) and her coterie of guards apprehend the villains who followed Don John’s nefarious orders, to great comic effect, and then his plot is revealed. But not before a faked death, a salty Act Two come-to-Jesus moment for Claudio, and an arranged marriage with the presumed dead Hero.

Tony Award-winning director Kenny Leon (Children of a Lesser God) sets the play in modern times, where Benedick and his soldiers are fighting for equal rights. It doesn’t take too much for Shakespeare’s language to come to life within the context of America’s current Cold Civil War, and Ms. Brooks and the other actors do a lot with the wealth of materials given them.

The set design is excellent, showing the back of Leonato’s (Chuck Cooper) stately brick estate, complete with a flagpole proudly waving the Stars and Stripes, and a banner proclaiming “Stacey Abrams 2020.”

Choreographer Camille A. Brown (Once on This Island) does a fantastic job incorporating many numbers into the production, from hip-hop to African dance, and it immeasurably livens up the production. Ditto for the live singing—Brooks opens and closes the play singing Marvin Gaye’s “What’s Going On,” and does justice to a couple of other numbers in between. Big props go to singer Tayler Harris for several fantastic solo performances. Caught up in the rapture, one audience member actually screamed out in appreciation. 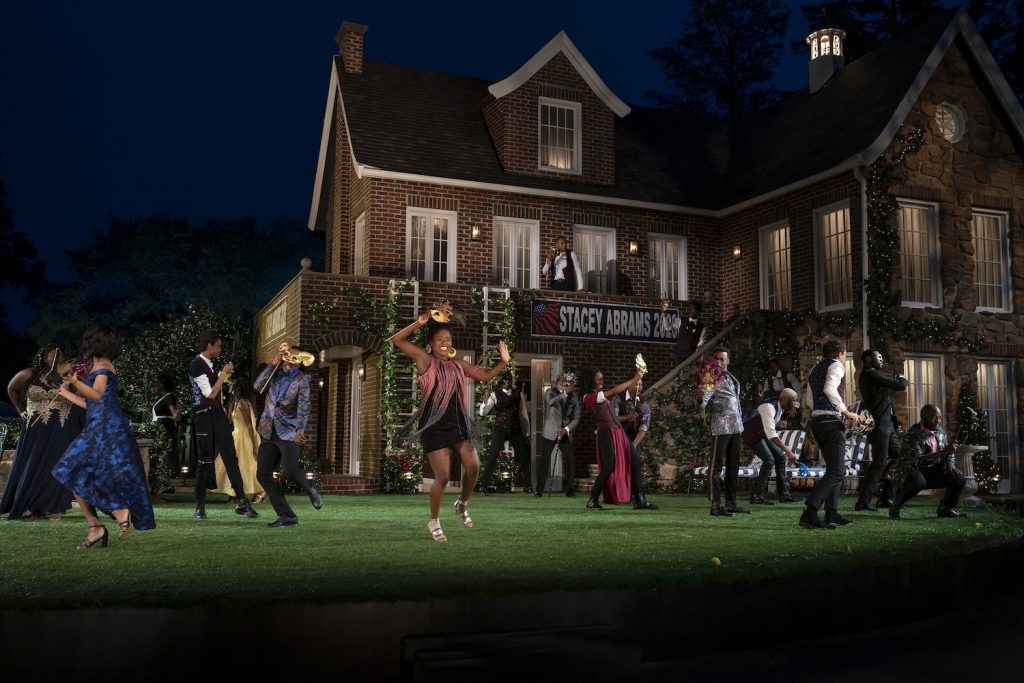 The cast of ‘Much Ado About Nothing.’ (Photo: Joan Marcus)

Much Ado has graced the stages of the Delacorte Theater many times over the years, most recently in 2014 starring real-life couple Lily Rabe and Hamish Linklater. But rather than have the cast of characters secret themselves in woods and orchards like past productions, Mr. Leon’s current rendition cuts through the emphasis on Shakespeare’s clever wordplay, never mistaking the forest for the trees.

In today’s political climate, it’s a welcome sight, as is a Shakespeare in the Park production that gives an entire company of black actors their due. This Much Ado About Nothing is, actually, quite something and not to be missed.

Much Ado About Nothing
Delacorte Theater
Central Park and West 81st Street, NYC
Through June 23 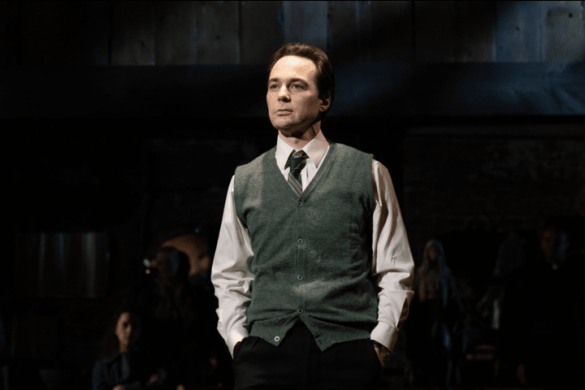