Top Posts
Keala Settle Heads to West End to Join...
‘The Kite Runner’ Heads to Broadway for Limited...
First Look at Audible’s ‘Long Day’s Journey Into...
Robert Cuccioli Stars in ‘A Touch of the...
Tim Rice Teases that ‘Chess’ May Come to...
‘Girl From the North Country’ Announces Closing, Sort...
NYC Broadway Week 2-For-1 Tickets Now on Sale
Brittney Johnson Will Be First Black Glinda in...
Broadway-Bound ‘Paradise Square’ Delays Opening Due to COVID-19
James Monroe Iglehart Joins Cast of Broadway’s ‘Chicago’
Home Beyond Broadway Mulgrew and Faridany Shine Brightly in ‘The Half-Life of Marie Curie’
Beyond BroadwayReviews 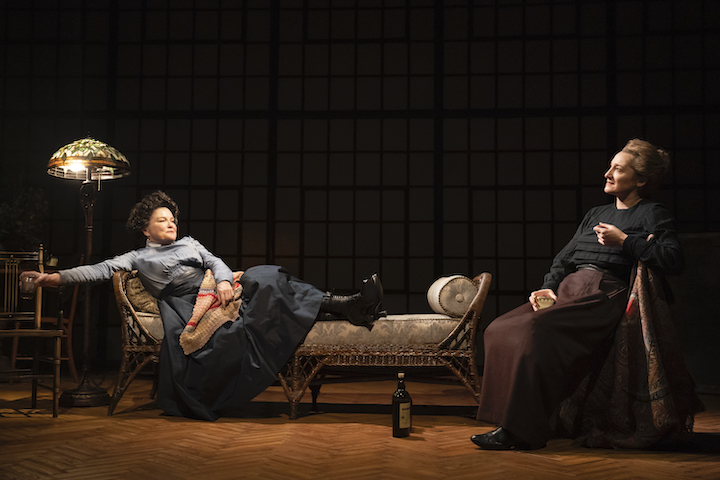 It was a packed house at Minetta Lane Theatre for the world premiere of Lauren Gunderson’s feminist paean, The Half-Life of Marie Curie. This bracing two-hander stars Francesca Faridany in the titular role and Star Trek’s Kate Mulgrew as famed suffragette and female engineer, Herta Ayrton.

“Science is always there, grand and calm, a refuge against all evils. That is what I feel when I settle into my laboratory and that is what Madame Curie must remember,” Ayrton famously quoted. The play opens in 1912 France and trains a microscope on a crumbling Curie. It’s six years after her husband Pierre has died, having successfully worked with Marie to purify and distill tons of pitchblende into radium — the tiny, glowing vial of green fire she unwisely carries in her pocket to remember the love of her life.

Curie, instead of being heralded a hero, is branded a “homewrecking harlot” for an affair with a married man. Curie is experiencing her own ‘half-life’ of sorts, described as “the moment an element transforms so fully that it is more other than self.” Public opinion has transformed this once-confident scientist into a heaving, crying shell of a woman.

On the other hand, there’s Ayrton, a brazen Brit who rechristened herself after a Swinburne poem. She wades through the “pack of wolves” outside Curie’s house, and turns immediately to helping her friend heal, noting, “I’m an engineer darling, we fix things any way we can.” Curie is being punished, as Ayrton observes, for “what every woman is punished for: being alive and enjoying it.”

Once the most brilliant woman in Europe, Curie is castigated as “a foreign mistress and a conniving tramp,” and fears she’ll lose funding. Her friend notes that “they don’t mind what Einstein does with his evenings,” assuring Curie they surely cannot take the lab of a Nobel Prize-winning physicist.

But the die has been cast: Curie tells Ayrton she’s won a second Nobel Prize for chemistry but has been asked to kindly not attend the ceremony. Curie founders, saying, “my career is over,” while Ayrton rails, “You must go to that ceremony. Take your prize. It’s yours.”

Despite her despair (plus the unexplained pain in her side and back), Curie travels to Ayrton’s home in Highcliffe-on-Sea under her maiden name. At the shore, Ayrton discusses her Hughes Medal-winning study of wave mechanics and convinces Curie to go for a dip. But when Curie dives deep, Ayrton fears she intends to end it all.

Ayrton pulls her out by her hair and they laugh until she discovers Curie’s vial of radium. Incensed and frankly afraid of the element, Ayrton says, “not everything in nature is good.” The two fight, with Curie saying, “it’s not my fault that you chose to waste your brain on small things.”

Eventually, she apologizes, and the two women get drunk. Curie regales Ayrton with tales of accepting her Nobel Prize by “visiting every single table to thank them for coming to honor me.”

These are women who “love our lovers and adore our children, but our life’s passion… is proof.” At the end of the day, it’s all about their laboratories, the experiments, and the thrill of knowing that “proof can be yours alone, even for an hour knowing something that no one in the world knows but you.” As Ayrton says, to hell with men who “don’t let you do anything. If they say you can’t show up, show up anyway… We’re women, we’re always at the front line of something. And they’ve only succeeded at stopping you if you stop. So don’t.” 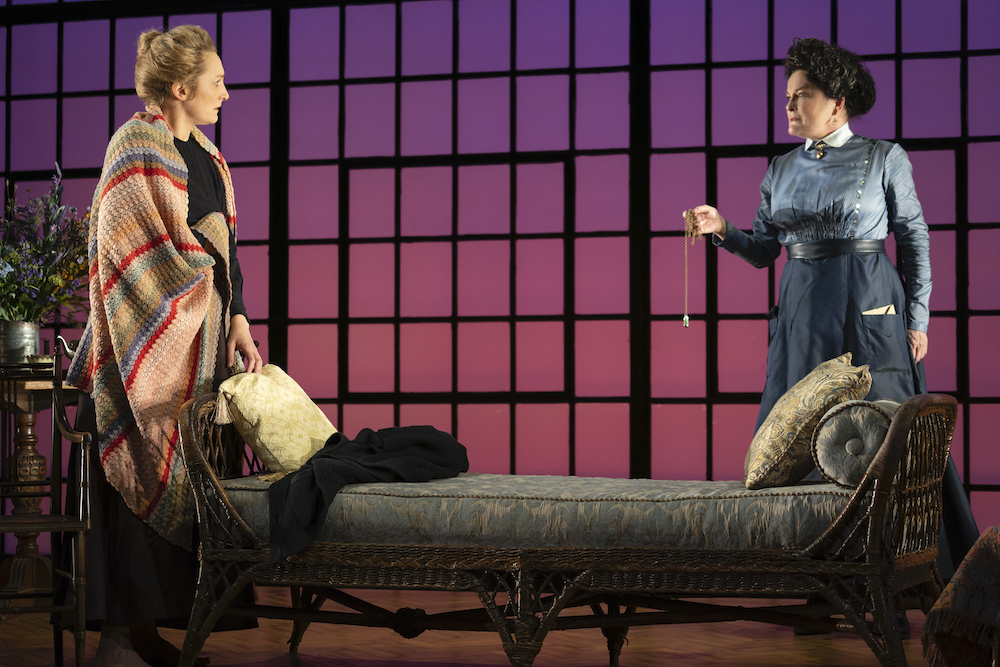 History shows how life rolled out for these two women: weathering World War I, Curie not only inventing the mobile X-ray machine but driving it to the frontlines, while Ayrton created a fan to remove chlorine gas.

The play ends in August 1923, with Ayrton dying of blood poisoning. As history holds, Curie died a decade later in 1934 of prolonged exposure to radiation. But the friendship between these two women bolstered each as they sought truths in science.

The Half-Life of Marie Curie does an excellent job illuminating the lives of two scientific giants, as well as the repressive period in which they lived. Faridany gives a heartrending performance as Curie, and, as one audience member quipped upon exiting the theatre, “Kate Mulgrew is just one of those actors who radiates pure charisma,” in this case, shining brighter than a vial of radium.

The play has been recorded for Audible and is set for release on December 6.