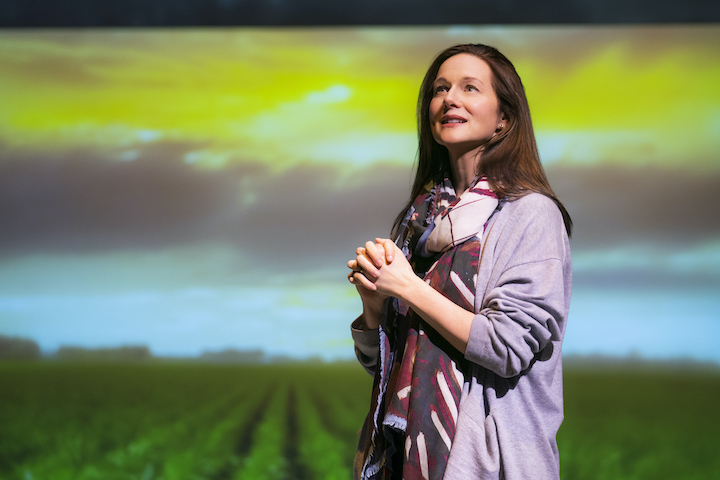 Few would dispute that Laura Linney is an acting treasure. Her presence in a 90-minute, one-woman Broadway play should yank theatergoers to see her the way a black hole sucks everything into it. The last thing one would expect of a play starring the five-time Tony Award nominee is a disconnection from her dramatic world. Such, though, was my reaction to My Name Is Lucy Barton.

Manhattan Theatre Club’s replication of the well-received London Theatre Company production offers a writerly exploration of a woman’s tense relationship with her mother. Adapted by Rona Munro from the book by best-selling author Elizabeth Strout (Olive Kittredge), Linney returns to the role, once again directed by the distinguished Sir Richard Eyre.

It’s a meandering memory play, told by the title character when recalling the nine weeks she spent in a New York hospital sometime in the 1980s, recovering from the infection she contracted after an appendectomy. To her surprise, she was visited by her mother, from whom she’d been estranged for years, and who stayed with her for five nights.

Bob Crowley’s setting contains little more than a hospital bed and a chair, with a small number of spectators seated to either side. Lucy talks directly to us, both in her own, regionally neutral, voice and the sharply Midwestern, flat A-riddled one of her mother. Numerous lighting shifts (by Peter Mumford) and video projections (by Luke Halls) continually transform the space from the hospital room, from whose window looms the Chrysler Building, to the Illinois farmland where Lucy was raised.

Lucy’s narrative, expressed in poetically descriptive, unsentimental, grammatically precise prose, recalls her childhood when her family’s poverty was a source of shame in their (fictional) small town of Amgash, and her parents were less than warm and comforting. Her father, a mechanic, was a World War II veteran who committed an atrocity that later caused him to suffer PTSD-like symptoms. Her visiting mother remains just barely affectionate, although she calls Lucy by her nickname, Wizzle. She’s only there, in fact, because her presence was requested and paid for by Lucy’s husband.

Looking back decades later, Lucy rambles through her memories of the visit and the many other events her thoughts bring to mind as she tries to come to terms with who she is and what her mother meant to her. While straightforward, the narrative makes frequent detours, sometimes focusing on Lucy’s medical condition, other times recounting her mother’s stories of local people, almost like a personal Spoon River Anthology of (mostly) marital crackups. Lucy gives vent to a wide range of feelings as she recalls being brought up in a house both physically and emotionally cold, lacking a TV and newspapers, and escaping into books, where she found the inspiration to become a writer.

Lucy leaps from anecdote to anecdote, recounting traumatic experiences that still haunt her, her awareness of the AIDS epidemic, and even introducing 9/11. She also informs us of how her own great loneliness led her to write so she could help others feel less alone. But mainly, she seems to wrestle with guilt feelings for the “ruthlessness” that, while establishing her as a successful woman, caused her family to see her choices as a betrayal, contributing as well to tensions with her own husband and children.

Many theatergoers will recognize the universals in Lucy’s story and empathize with her dilemma—including the notion that one can yearn for a family with which one has nothing in common—but there’s an ordinariness to the material that lacks dramatic impact. Simply put, what may read well on the page becomes unexceptional on the stage.

For all her ability, Linney’s performance fails to make us care. While we sense her emotional commitment and even see the tears welling, her perfectly articulated, boldly intelligent presence never creates the kind of everyday naturalness one senses in Lucy’s character. Instead, she often appears not so much to be talking to us but to be reciting.

Her name is Laura Linney. Sadly, she falls short of being Lucy Barton.