Top Posts
‘Company’ to Hit the Road on North American...
Meet the Full Cast of ‘Shucked,’ Coming to...
Full Cast for ‘Parade’ Announced
Stephen McKinley Henderson Gives the Performance of His...
The McKittrick Hotel Announces the Return of ‘The...
Broadway Stars Honored with Academy Award Nominations
Taylor Trensch, Danny Wolohan, and More Join the...
A Gay Road Trip Comes to The Brick...
Maude Apatow of ‘Euphoria’ is the Next Audrey...
Tony Award Winners to Star in ‘Hercules’ at...
Home Beyond Broadway Born to Be Mild: ‘My Very Own British Invasion’
Beyond BroadwayReviews 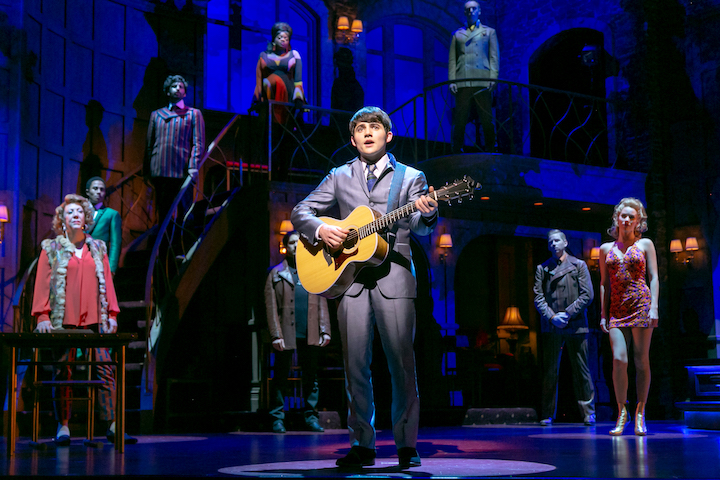 If Andy Warhol lived in today’s times, he might have altered his most famous quip to include that in the future not only will everyone be famous for 15 minutes, but eventually they’ll have a jukebox musical produced about their life. Proving this theory is My Very Own British Invasion, the current world premiere offering at New Jersey’s Paper Mill Playhouse, which takes its inspiration from the early career of sixties Brit pop star Peter Noone.

Set in the mid-1960s in London’s famed Bag O’ Nails club, My Very Own British Invasion loosely follows Noone’s story from teen heartthrob soap opera actor to bubblegum pop frontman Herman of Herman’s Hermits as he pursues a Marianne Faithfull-inspired bad girl Pamela who is drawn to the Mick Jagger-inspired bad boy Trip. Along the way, a host of real-life names like John Lennon, Ed Sullivan and Brian Epstein float in and out of the narrative.

As anyone familiar with the period knows, the good boy didn’t end up getting the bad girl. Faithfull and Jagger’s real-life, five-year love affair went full bloom until 1970. For the purposes of this musical, Pamela falls prey to drugs only to be rescued by Peter who she ends up leaving for Trip.

All of this is told in a somewhat sanitized fashion that removes most of the sex and drugs out of “sex, drugs and rock and roll.” Fortunately, the creators were able to secure the rights to some of the era’s most memorable songs, which are performed with gusto by the talented ensemble. 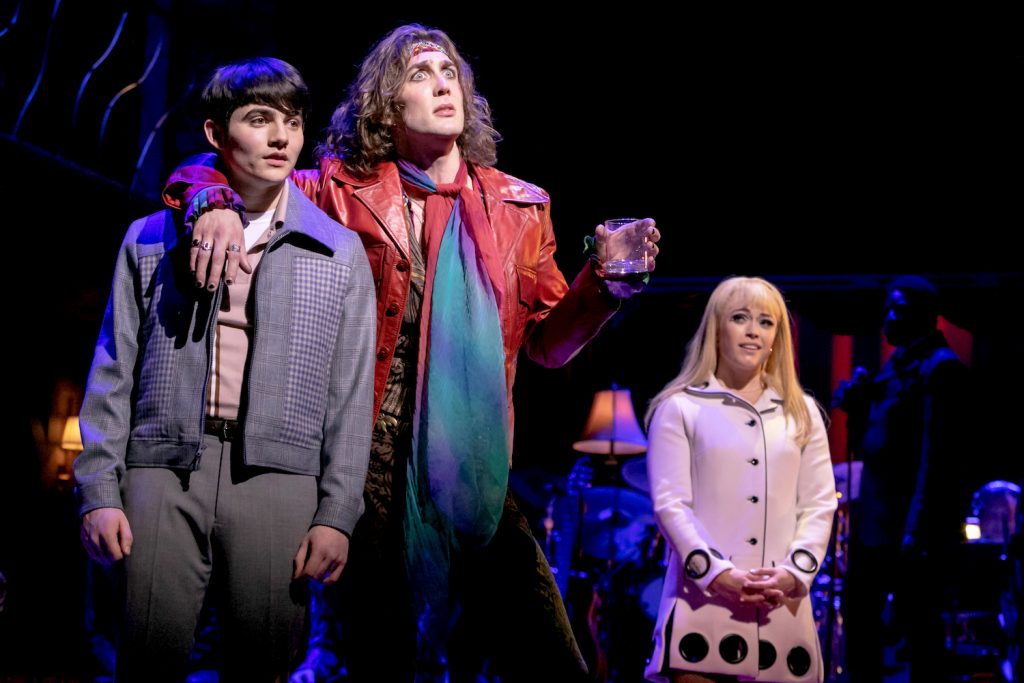 Included in the over two-dozen songs are Brit-pop standards such as “She Loves You”, “Time of the Season”, and “For Your Love” as well as Herman’s Hermits’ hits “Mrs. Brown, You’ve Got a Lovely Daughter”, “I’m Into Something Good,” and “I’m Henry the Eighth I Am.”

In the role of Peter, newcomer Jonny Amies makes an impressive professional debut. With the face of a cherub, he easily tackles Noone’s canon of songs while injecting a sense of sweet naivete into the evening’s protagonist. Fresh off of his Off-Broadway run as the dimwitted cowboy in Desperate Measures, as Trip, Conor Ryan oozes with the appropriate level of Mick Jagger-like sexuality. Not faring as well as her co-stars is Erika Olson who, on opening night, sounded shakey in her vocals. Adding comic relief is John Sanders as an acronym-dropping talent manager.

Tony Award-winner (Kinky Boots) Jerry Mitchell performs double-duty as director-choreographer. As dance master, Mr. Mitchell is treading familiar ground, having visited this period previously with Hairspray. He’s at his best when he’s bopping his dancing ensemble around David Rockwell’s attractive multi-leveled set. As director, he’s surprisingly able to find rare tender moments in a show that is desperate to hop to the next song. Which brings me to the show’s central flaw, its book.

After redefining the jukebox bio-musical with his Rashomon take on telling the Four Seasons’ story in Jersey Boys, and carefully walking the line between camp and sentiment in this season’s The Cher Show, I expected book writer Rick Elice to score a hattrick with My Very Own British Invasion. Regrettably, he seems to have bitten off less than he is able to chew here. Written as a fable, with both historical characters and archetypes, the show seems to want an epic, larger-than-life feel. However, the story at the center of this show just isn’t that interesting. The narrative takes a backseat to the songs, leaving the audience wondering why we’re not just watching a concert or musical review.

If the past two decades on Broadway have taught us anything, it’s that not all jukebox bio musicals are created equal. For every Jersey Boys, there is a Lennon. For every Beautiful, there is a Ring of Fire. Unfortunately, for all the chart-topping hits included in My Very Own British Invasion, the evening ends up feeling like Henry VIII’s marriage to the widow next door. It’s been done seven times before — and better. Despite the pedigree of talent involved, My Very Own British Invasion fails to capture the flag.