Top Posts
‘Company’ to Hit the Road on North American...
Meet the Full Cast of ‘Shucked,’ Coming to...
Full Cast for ‘Parade’ Announced
Stephen McKinley Henderson Gives the Performance of His...
The McKittrick Hotel Announces the Return of ‘The...
Broadway Stars Honored with Academy Award Nominations
Taylor Trensch, Danny Wolohan, and More Join the...
A Gay Road Trip Comes to The Brick...
Maude Apatow of ‘Euphoria’ is the Next Audrey...
Tony Award Winners to Star in ‘Hercules’ at...
Home Beyond Broadway National Theatre’s ‘Romeo & Juliet’ Sets Release Date
Beyond BroadwayHot Ticket 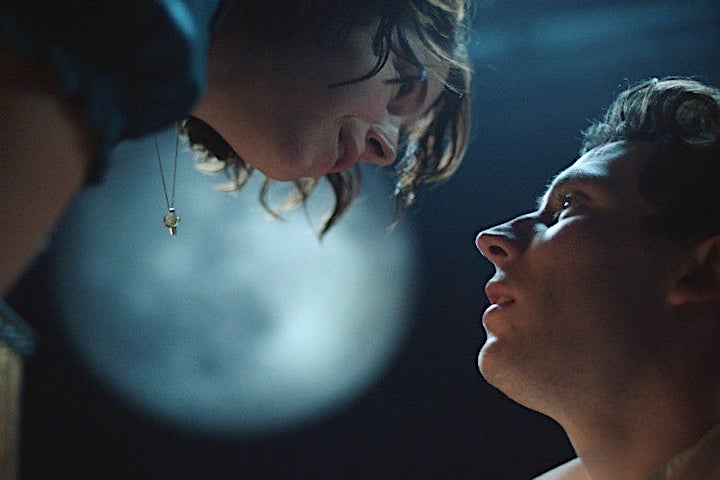 Jessie Buckley and Josh O’Connor in a new still from Romeo & Juliet.(Photo provided by the National Theatre.)

“Did my heart love till now?” The National Theatre has set its release date for its highly anticipated production of Romeo & Juliet! The film will be available to watch in the UK on Easter Sunday, April 4, 2021, while U.S. viewers can begin streaming on April 23.

The original production was meant to be staged in 2020 in London but has been postponed due to the pandemic. Now, the cast will assemble on the Lyttelton Theatre to film Shakespeare’s classic to share with at-home audiences to enjoy the work from the comfort of their homes. Romeo & Juliet will be released as an original film as part of National Theatre At Home on Sky Arts in the UK (available to watch on Freeview channel 11 and Freesat 147) and PBS in the US (check local listings).

Directed by National Theatre associate Simon Godwin, the play will be a condensed 90-minute production (adapted by Emily Burns). Taking on the titular roles are rising stars Josh O’Connor (God’s Own Country, “The Crown,” BBC’s “Les Misérables”) and Jessie Buckley (Judy, and A Little Night Music and Henry V opposite Jude Law on the West End). As previously announced for the Olivier production, Fisayo Akinade will play Mercutio. Further casting includes Adrian Lester as the Prince, Lloyd Hutchinson as Lord Capulet, Colin Tierney as Lord Montague, Ella Dacres as Peta, Deborah Findlay as the Nurse, Tamsin Greig as Lady Capulet, Lucian Msamati as the Friar, Shubham Saraf as Benvolio, David Judge as Tybalt, Alex Mugnaioni as Paris and Ellis Howard as Sampson.

As reported in London Theatre, director Godwin said, “This has been a uniquely challenging time for the industry; I think [the filming] is a genius idea. I think I speak for myself, the creative team, and the cast when I say how delighted we are to be focusing all our creativity into this version of Romeo & Juliet once more. Some ideas are staying, lots of new ones are coming in — I’m very excited about this new genre, combining film and theatre, and bringing together the remarkable talents of those industries.”

If holding til spring is too long a wait, audiences can peruse the multitude of offerings now available as part of National Theatre at Home, which shares taped productions from the famed theater.