Top Posts
Stephen McKinley Henderson Gives the Performance of His...
The McKittrick Hotel Announces the Return of ‘The...
Broadway Stars Honored with Academy Award Nominations
Taylor Trensch, Danny Wolohan, and More Join the...
A Gay Road Trip Comes to The Brick...
Maude Apatow of ‘Euphoria’ is the Next Audrey...
Tony Award Winners to Star in ‘Hercules’ at...
‘New York, New York’ Finds its Two Leads
Full Casting Announced for Oscar Isaac-Led ‘The Sign...
Disco Pop Musical ‘Here Lives Love’ to Bow...
Home Beyond Broadway Caught in the World Wide Web: ‘Octet’
Beyond BroadwayReviews 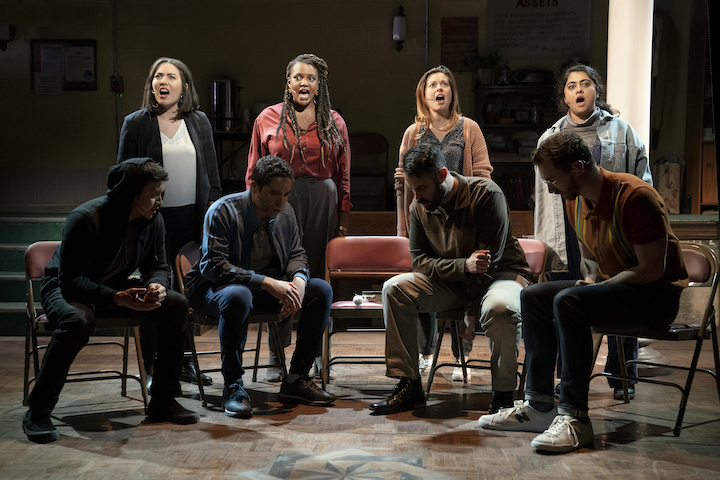 In 2012, when Dave Molloy created his groundbreaking musical Natasha, Pierre and the Great Comet of 1812, he built it on the solid narrative foundation of one of the world’s great novels, Leo Tolstoy’s War and Peace. Molloy’s latest venture, the much less memorable Octet, is inspired by a far milder premise, the AA-like gathering of a group of eight Internet addicts who not only sing about their addictions—both solo and chorally—but do so a cappella (not unlike Broadway’s short-lived In Transit).

Its biggest problem is that, over an intermissionless hour and 45 minutes, Molloy’s frequently brilliant music, sung by eight exceptional singers, fails to sustain interest without the support of an engrossing dramatic script.

Amy Rubin and Tiffany Vasta have designed the Linney Courtyard Theatre at the Pershing Square Signature Center with detailed realism to resemble a haze-filled, borderline-shabby, church basement. This includes making the passageway to your seat part of the design, lining it with hundreds of flyers from local businesses as well as a list of the church’s hour-by-hour activities agenda. One event listed alludes to a meeting of “The Friends of Saul,” the group therapy session about to be witnessed.

Gradually, as a gospel song plays in the background, the participants, costumed by Brenda Abbandandolo in everyday-looking clothes, amble in until the day’s leader, Paula (Starr Busby), sets the session in motion. She welcomes the group, has them read “The Eight Principles,” an analog of AA’s 12 Steps, and invites people to speak. This they do, mainly in song but using considerable dialogue as well, with greater or lesser degrees of needfulness.

Each provides a tale of their personal Web addiction, their sung confessions—always introduced by a pitch pipe—accompanied by beautifully orchestrated (by musical director Or Matias) choral support. The solos are often set against a backdrop of rhythmic effects, like hand clapping or thigh smacking.

Some songs are clearly marked “hymn” in the script but, after a while, the reliance on a cappella gives them all a hymnal feeling, regardless of their changing rhythms. The characters identify themselves as addicts, as per the usual AA mantra, “My name is so and so, and I’m an alcoholic.” Their addictions have affected them both physically and mentally. They seek each other’s mutual support to defeat the “monster” of the Internet, which has caused them to become obsessive compulsives, clicking their lives away at the expense of their health and human relationships.

Molloy’s dozens of research sources, their relationship to Octet not particularly apparent, are listed on a program insert and include items ranging from A Hitchhiker’s Guide to the Galaxy to A Chorus Line to Einstein on the Beach to Blade Runner.

Molloy’s lyrics, filled with Internet terms (apps, blockers, trackers, refresh, swipe, memes, etc., etc.), range from clear to dense to opaque as the group members recite their issues. Now and then, recuperative therapy techniques are introduced through both songs and dialogue.

Jessica (Margo Seibert) is preoccupied with her negative reception on social media after a video she posted went viral; Henry (Alex Gibson), is a gay guy who can’t keep his hands off video games about candy; Paula reveals her and her husband’s inability to do anything in bed but stare at their cellphones; Velma (Kuhoo Verma) has a thing for tarot; Karly (Kim Blanck) and Ed (Adam Bashian) combine their problems into a duet about dating sites and porn; Toby (Justin Gregory Lopez) — in an arcane rant — goes on about what I think he’s implying is a conspiracy to destroy our minds; and Marvin (J.D. Mollison), a neurochemist, provides an ill-fitting, shaggy-dog story about the existence of God.

Aside from the choral passages, there’s little interaction among the group and only a bare minimum of context for knowing any of these characters as people. Dramatic action is nil, suspense absent, and boredom imminent. Director Annie Trippe makes the most of her limited material, smartly rearranging her groupings, and lighting designer Christopher Bowser further heightens the simple visuals with his luminous touches.

My name is Sam and, while I’m not an addict, I confess that, well before Octet concluded, I couldn’t resist feeling that the new iPhone I’d acquired that afternoon deserved my immediate attention.