It’s your last chance to see Once On This Island — one of our favorite shows of the past year. The Broadway revival closes January 6. Here’s our original review and we encourage you to check out this beautiful musical while you still can!

In a recent interview, Lea Salonga, one of the stars of the Broadway revival of Once On This Island, described the piece’s relevance as such: “There’s a message that people need to move forward and rebuild, but it isn’t just about brick and mortar. It’s about filling your heart with love and hope. These are powerful forces to help move forward after a tragedy.” Salonga’s words ring true as Once on This Island’s plot, framed by a destructive storm that decimates the French Antilles, is a haunting reflection of the extensive damage that blew through the Caribbean this fall via Hurricanes Irma and Maria. Hailey Kilgore in ‘Once On This Island.’ (Photo: Joan Marcus via The Broadway Blog.)

With a brilliant set design by Dane Laffrey, Circle in the Square has been transformed into a cluttered beach, scattered with repurposed materials that become the framework for Ti Moune’s (Hailey Kilgore) story. The peasant girl saves the life of Daniel (Isaac Powell), a handsome island aristocrat, after a nearly fatal car crash. While nursing him back to health, Ti Moune falls in love with him and agrees to sacrifice her life to the island gods to save him. The racial clash becomes evident when she follows Daniel back to his home, and though their romance temporarily kindles, he eventually decides to adhere to social traditions and marry Andrea (Alysha Deslorieux). Ti Moune, devastated by the turn of events, rejects Papa Ge’s (Merle Dandridge) encouragement to kill Daniel, and instead, drifts into the ocean, ending her own life.

Director Michael Arden and members of the creative team traveled to Haiti for research, diving into the culture’s rituals, including taking part in a Vodou ceremony. This inspiration was a driving force and is evident throughout the production. In addition to Laffrey’s eye-popping set of repurposed materials, costume design by Clint Ramos and lighting design by Jules Fisher and Peggy Eisenhauer create an island kaleidoscope that magically transforms throughout the 90-minute production. From Daniels’ scrap metal car to the candlelit chandeliers that hover over the grand hotel, Arden (along with choreographer Camille A. Brown) deftly navigates the cast through the ever-changing landscape.

At its core, Once On This Island can only succeed if its central character Ti Moune captures the audience’s heart. Kilgore, making her Broadway debut, is a knockout. While her vocals are on par with the role’s originator, LaChanze, Kilgore brings to the role innocence, budding sexuality, fierce determination, and at times, a beautiful restraint that allows the acting company to envelop her in the storytelling.

Fortunately, Kilgore is surrounded by immense talent, many of whom have their own shining moments. Standouts include the aforementioned Dandridge as Papa Ge, Demon of Death, whose Amazonian presence and power vocals will make you crave for Dandridge’s more frequent presence on the New York stage; Kenita R. Miller as Mama Euralie, whose touching maternal performance will bring a tear to your eye; and newcomers Powell and Alex Newell as Asaka, Mother of Earth, who could give Tituss Burgess a run for his money for stratospheric vocals. A special mention should be made for understudy Darlesia Cearcy, who played the role of Erzulie, Goddess of Love, at the performance I saw. Channeling her inner Iyanla Vanzant, Cearcy — less than two weeks after opening night — Cearcy’s magnetism was breathtaking.

In the show’s final moments, a tree rises (interpreted as soaring log bedecked with mementos and family photos) — a symbol of Ti Moune’s everlasting presence — as the company sings: The cast of ‘Once On This Island.’ (Photo: Joan Marcus via The Broadway Blog.)

We tell the story

With such a rich theatrical fabric woven throughout, I have a feeling that repeated visits to this island are in order.

Once On This Island
Circle in the Square
235 West 50th Street, NYC

Matthew Wexler is the Broadway Blog’s editor. More of his work can be seen at www.wexlerwrites.com. 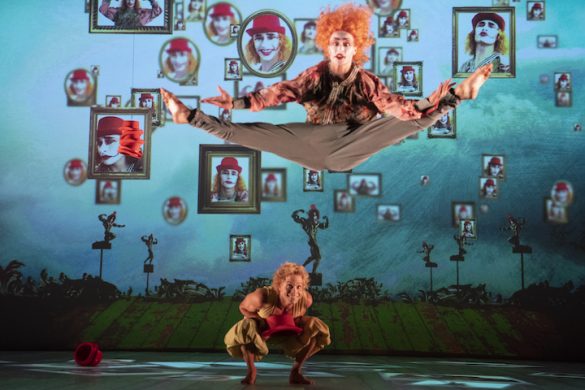