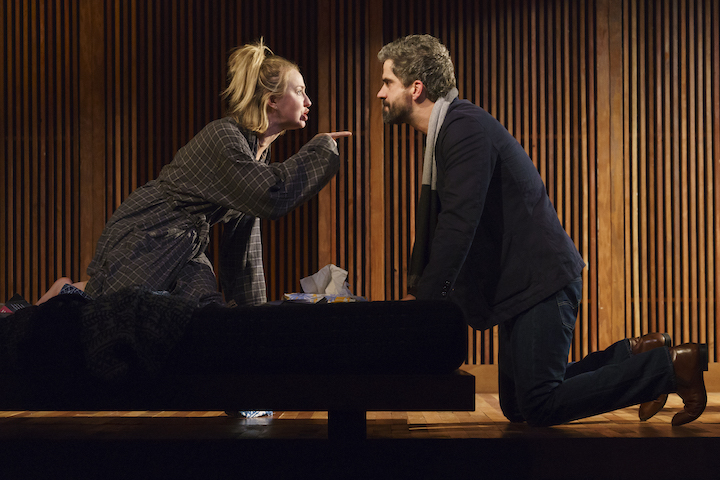 (l to r) Halley Feiffer and Hamish Linklater in ‘The Pain of My Belligerence.’ (Photo: Joan Marcus)

Once again, Halley Feiffer’s feminist brilliance takes center stage. Beyond the playwright-actor’s own star turn and uncomfortably familiar characterization, she has written a compelling counterpoint: a devastatingly charming yet parasitic man likened to a tick, an incubus which saps its host of energy, drive, self-respect and integrity. It’s eerily relevant as is the rest of Feiffer’s genius new work, The Pain of My Belligerence.

Set in Playwrights Horizons’ intimate Peter Jay Sharpe Theater and featuring a Japanese-style wooden slat scenic design by Mark Wendland, Belligerence follows Cat (Halley Feiffer), a 20-something writer for The New Yorker, who has written a profile on a restaurateur named Yuki (Vanessa Kai). She also happens to be on a date with her husband (Hamish Linklater). 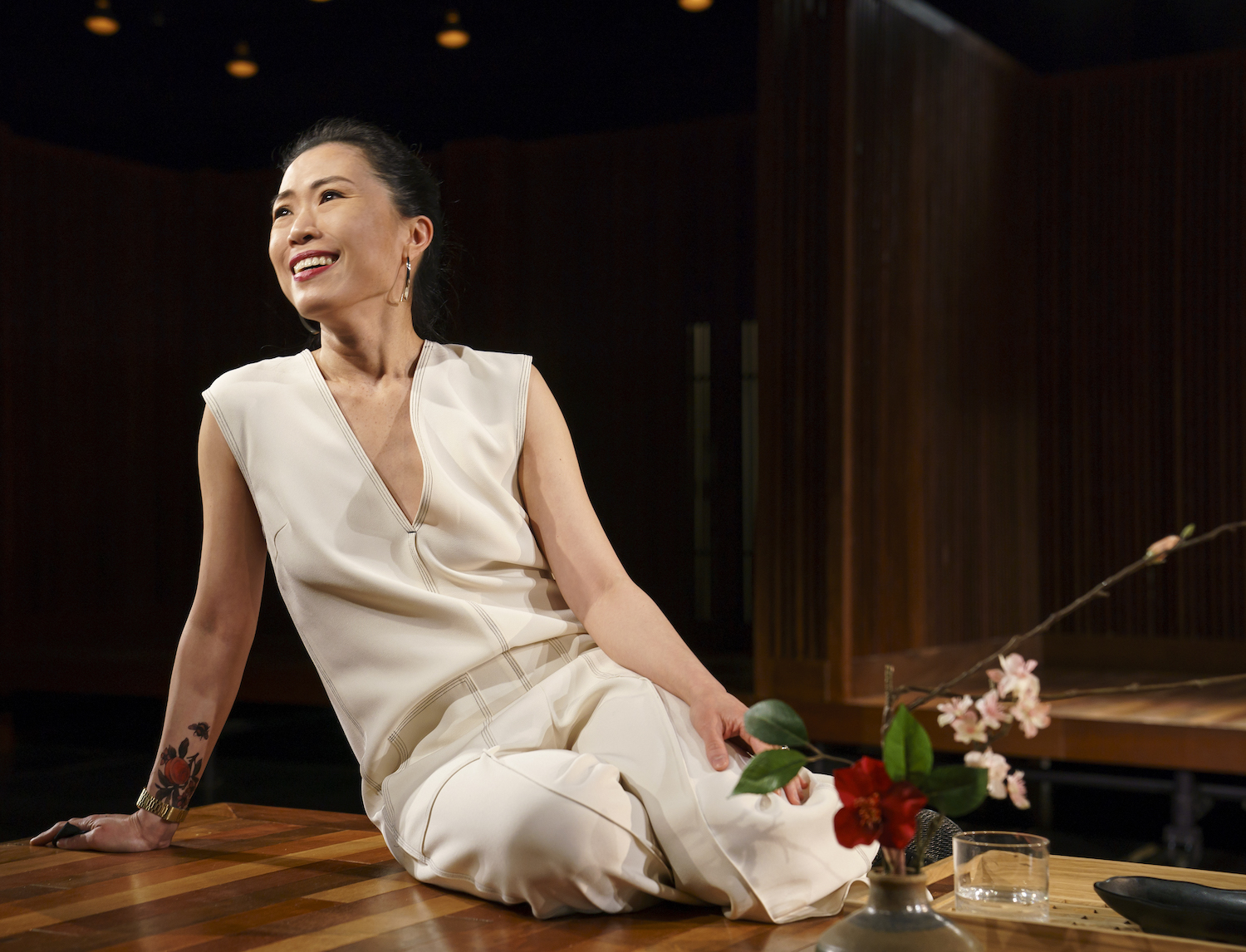 Vanessa Kai in ‘The Pain of My Belligerence.’ (Photo: Joan Marcus)

One wants to leap on stage and interrupt the dinner to save Cat from this self-proclaimed “… evil, serial killer, monster, devil, sociopath” but it’s easy to be mesmerized by Feiffer’s uncanny dialogue, in which Guy protests that he’s “reclaiming” certain misogynistic rhetoric, wants to know how it feels to tell Cat to shut up, or that he likes not knowing much about her so he can project whatever he wants onto her. Under masterful direction by Trip Cullman, Cat’s hesitation and Guy’s aggression blend into captivating chemistry.

It’s enough to make any self-respecting woman leave. But instead, Cat laughs at Guy’s insults, an homage to the unfortunate tendency for women to giggle or shrug in the face of discomfort. So she stays. Smitten, she lightly chastises him for his racist and sexist rhetoric but also finds herself utterly under his spell. Sound familiar?

Feiffer’s script plays out as at once self-sabotaging and poignant, a dive into a careening river with an end you can see a mile away: Guy and Cat begin a four-year affair bathed in patronizing patriarchal behavior, signposted with presidential elections in 2012, 2016, and 2020.

The second scene, which takes place on the night of the 2016 election, finds Cat sick and upset, hobbling from bath to bed. She’s seriously ill with Lyme disease, a tick-borne illness referenced at the end of the first scene when Guy bites a tick off of Cat’s neck. Much like the bug, Guy has rooted himself in Cat’s psyche and has thoroughly infected her past four years. She has no friends, no one she sees but Guy, and no one else she cares about.

Yet, we see a marked shift in their relationship, with a tired Cat telling Guy that he should stop talking because she’s not going to sleep with him, that he doesn’t care if she lives or dies. Guy is much the same, telling Cat that, while sick, she looks “victim-y” and he’s into it. The co-dependent couple is in love but relies on aggression and sexual manipulation.

Cat finds some reconciliation in the final scene. As opposed to female feuding so often portrayed, Cat finds peace in talking to Yuki, who has long suffered his infidelity. Speaking with the successful pseudo role model, Cat finds validation.

Feiffer drew loosely from personal experience to craft Belligerence. The playwright had a serious bout of Lyme disease and suffered an excruciating breakup. In the program notes, she discusses her interest in writing about “how a woman who considered herself confident and powerful could find herself seduced into her own subjugation to the point that she barely recognized herself. How this happens to so many women.”

The upsetting ubiquity and familiarity of the plot, in addition to its framework around the 2016 election, make the piece stunningly relevant. We see a man’s worry that his behavior echoes the sexism practiced by Trump, as well as a woman’s abandonment of self to serve the man and find validation from his presence.

Feiffer, the sharp playwright behind works such as I’m Gonna Pray For You So Hard and A Funny Thing Happened on the Way to the Gynecologic Oncology Unit at Memorial Sloan Kettering Cancer Center of New York City, has created a mouthpiece for today’s landscape, an explicit probe into the psyche of political correctness and behavioral norms. The end of the piece, set in 2020, brings hope, new beginnings, and a deep sigh after thinking about what we have all been through.

Both cathartic and heart-wrenching, The Pain of My Belligerence offers a fresh and uncomfortable examination of love, loss and illness.