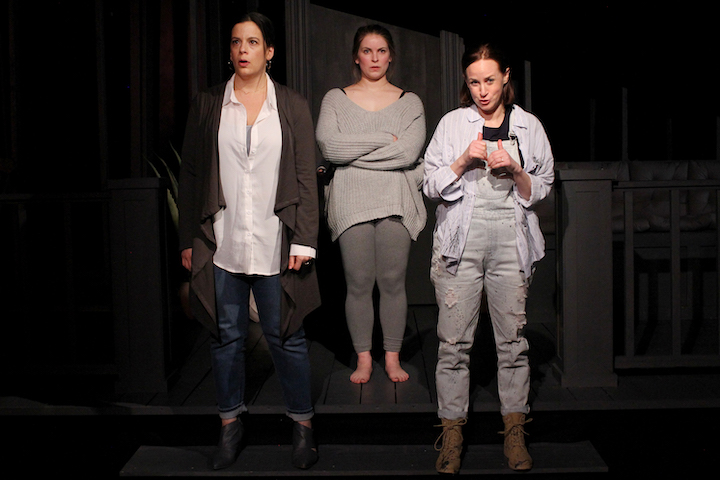 Will Arbery’s absurdist fantasy Plano centers on three adult sisters and their longing for connection. The play aims to accomplish a lot. But sitting down at my laptop the next day to write about it, I found that I’d retained very little. Directed by Steppenwolf company member Audrey Francis and part of Steppenwolf’s LookOutSeries, First Floor Theater’s Chicago premiere moves at breakneck speed through space and time but lacks emotional impact.

Anyone who has a sister will tell you: these relationships are complicated. The sisterly love of Plano is no exception. When Anne (Elizabeth Birnkrant) announces she’s pregnant, her family rejoices but also wonders if her new husband John/Juan (Chris Acevedo) is entering marriage and fatherhood for the right reasons. The family empathizes with Isabel’s (Amanda Fink) chronic pains but secretly wonder if her ills are a result of religious fanaticism. And when it comes to Genevieve’s (Ashley Neal) rapidly deteriorating home life, the three sisters pitch in to murder her ex, Steve (Andrew Cutler) – but is he really dead? There are slug infestations, drunken confessions and doppelgängers galore as Anne, Genevieve and Isabel struggle to balance ambition, romance and family and find out what’s going on in the nearby town of Plano.

There’s a lot to unpack in Plano, perhaps too much for 80 minutes. Arbery employs rapid-fire dialogue, which the ensemble executes with aplomb. (Characters often refer to something they’ll do “later,” then immediately say, “It’s later.”) Unfortunately, covering this much ground in such a short play feels shallow and forgettable. None of the three sisters feels particularly fleshed-out, and Genevieve (despite being played by the consistently excellent Neal) often comes off as a screechy, stereotypical sitcom wife, unsatisfied with her husband, kids and lot in life. Anne is a sad sack who’s settled, and Isabel, perhaps the most developed of the three central characters, chases the high of faith right into delusion.

The supporting players fare even worse. The audience barely registers that both John and Steve are repeatedly escaping from urban Dallas to the Plano suburbs without telling their wives before both characters disappear in the play’s final 20 minutes. Did I mention the faceless ghost (Andrew Lund), who torments the virtuous Isabel before spooning her in bed, when he’s not lurking around the action?

As an actor, Francis (most recently seen as a realistically pushy mom in Steppenwolf’s Dance Nation) is exceptional. Her directing, in this case, however, is not nearly as strong. Much of Plano’s staging takes place on the floor of Steppenwolf’s 1700 Theatre studio space, and many opening night audience members craned their necks to see climactic moments (such as Steve’s demise). The actors are more visible standing on Kristen Martino’s skewed front porch set. This staging primarily takes place during dialogue-heavy scenes, so most of the action is partially obscured by sightlines. 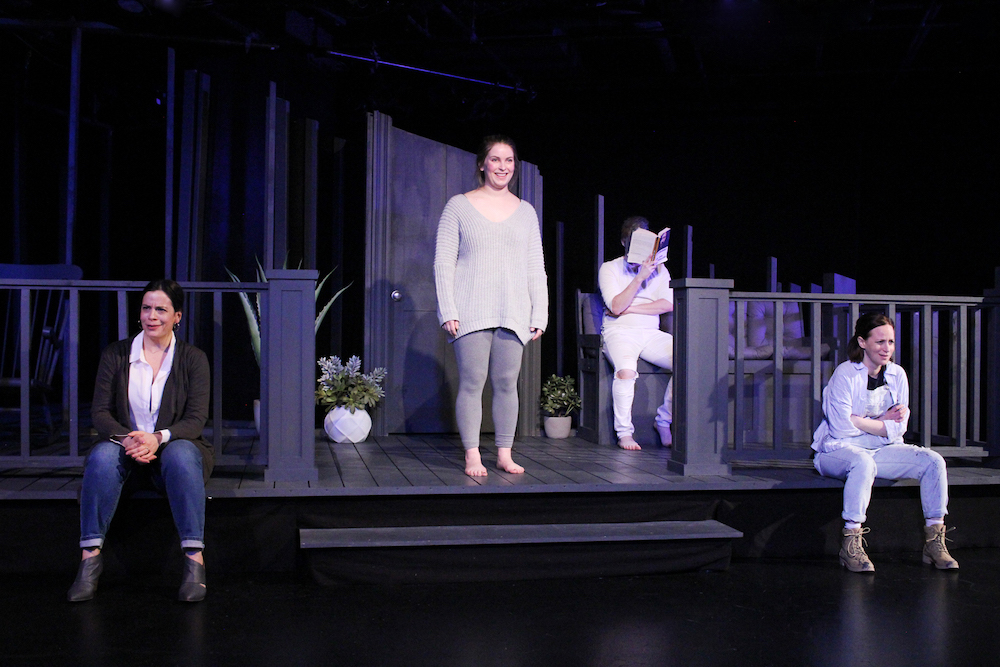 The strongest absurdist theater challenges its audience, forcing them to question what they are seeing and hearing while confronting their own beliefs, thoughts and desires. Despite what may be the best of intentions, Plano misses these touchpoints. The audience sees the effort from playwright, director and actors at every turn, how hard each is working to send a message. The problem with all this effort, however, is that it leaves no room for impact.