Top Posts
‘Company’ to Hit the Road on North American...
Meet the Full Cast of ‘Shucked,’ Coming to...
Full Cast for ‘Parade’ Announced
Stephen McKinley Henderson Gives the Performance of His...
The McKittrick Hotel Announces the Return of ‘The...
Broadway Stars Honored with Academy Award Nominations
Taylor Trensch, Danny Wolohan, and More Join the...
A Gay Road Trip Comes to The Brick...
Maude Apatow of ‘Euphoria’ is the Next Audrey...
Tony Award Winners to Star in ‘Hercules’ at...
Home Beyond Broadway Lawyers and Laughs: ‘The Portuguese Kid’
Beyond BroadwayReviews 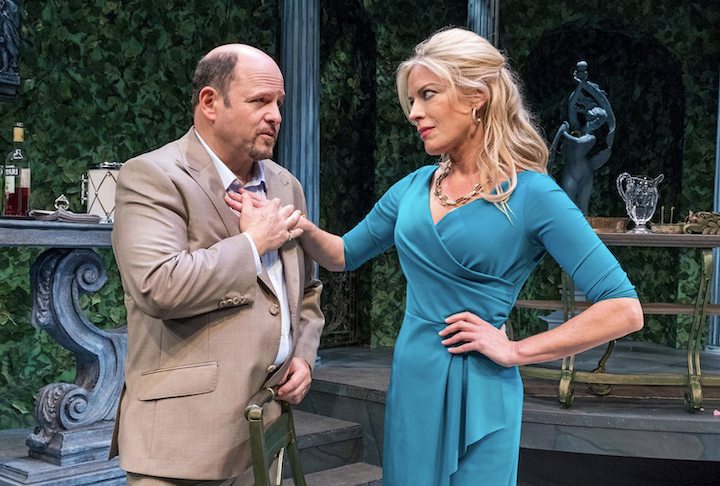 The Portuguese Kid has nothing to do with Portugal and very little to do with kids. In fact, it doesn’t have much to do with anything. It feels as though playwright John Patrick Shanley, who also directed his Off-Broadway comedy-drama, wants it to be more poignant than it is. This is not to dismiss its charm. At its core, Shanley’s 2017 play, which premiered at the Manhattan Theatre Club, could easily be placed in the sitcom genre.

BroadwayHD captured the show during its extended run, and while it generally garnered unfavorable reviews, it had two strong reasons for ticket sales: Jason Alexander and Sheri Renee Scott.

Alexander, best known for his nine-year run as George Costanza on TV’s Seinfeld, is as comfortable on stage as he is in front of a camera. Theater geeks will likely remember him as an original Broadway cast member of the flop-turned-cult-classic Merrily We Roll Along. He later took home a Tony Award for 1989’s Jerome Robbins’ Broadway and starred in the Los Angeles production of The Producers.  In The Portuguese Kid, he plays Barry Dragonetti, a “lousy lawyer,” according to his overbearing mother, Fausta (Mary Testa).

The Rhode Island-based attorney is tasked with handling financial matters for Atalanta Lagana (Scott), a seductive, twice-widowed temptress. The two have a long-standing friendship from childhood. During their visit, she reminds him that she protected him from a mugger who-Barry is convinced- was a Portuguese kid.  The two have undeniable history and romantic chemistry, but Barry is now married to Patty (Aimee Carrero), a much younger, sassy Puerto Rican. To make matters even more complicated, Atalanta is sleeping with Patty’s ex-boyfriend, Freddie Imbrossi (Pico Alexander).

Scott, the other presumptive reason for good box office, is outstanding. In less skilled hands, the role would easily be unlikable, but the Tony-nominated star manages to mine some vulnerability while delivering some great laughs.

The main reason to stream Shanley’s story is for stage veteran Mary Testa (Rodgers and Hammerstein’s Oklahoma!). Fewer comedic actors have the voice, priceless facial expressions, and comic timing. Though her presence is limited, each moment she’s on stage is rich. So much, in fact, that she receives exit applause during her last scene.

Shanley is no charlatan when it comes to writing. He won a 1987 Academy Award for the screenplay of Moonstruck and a Pulitzer and Tony Award for Doubt in 2004. Take a more in-depth look into his other screenplays, however (Joe Versus the Volcano and The January Man,) and a common theme among critics will arise: his plots are often unclear. Such is the case with The Portuguese Kid. Is it a modern retelling of Greek parables? And why does everyone in the cast sport a thick Bronx accent if they’re all from Rhode Island?  It’s probably better not to overanalyze and simply watch it for the wispy, brisk entertainment that it is.

The Portuguese Kid
Available for streaming on BroadwayHD.
Looking for more laughs? Check out Bright Colors and Bold Patterns.