Top Posts
‘Company’ to Hit the Road on North American...
Meet the Full Cast of ‘Shucked,’ Coming to...
Full Cast for ‘Parade’ Announced
Stephen McKinley Henderson Gives the Performance of His...
The McKittrick Hotel Announces the Return of ‘The...
Broadway Stars Honored with Academy Award Nominations
Taylor Trensch, Danny Wolohan, and More Join the...
A Gay Road Trip Comes to The Brick...
Maude Apatow of ‘Euphoria’ is the Next Audrey...
Tony Award Winners to Star in ‘Hercules’ at...
Home Beyond Broadway The Public Theater’s ‘Suffs’ Casts Light on the Struggle for Equal
Beyond BroadwayReviews 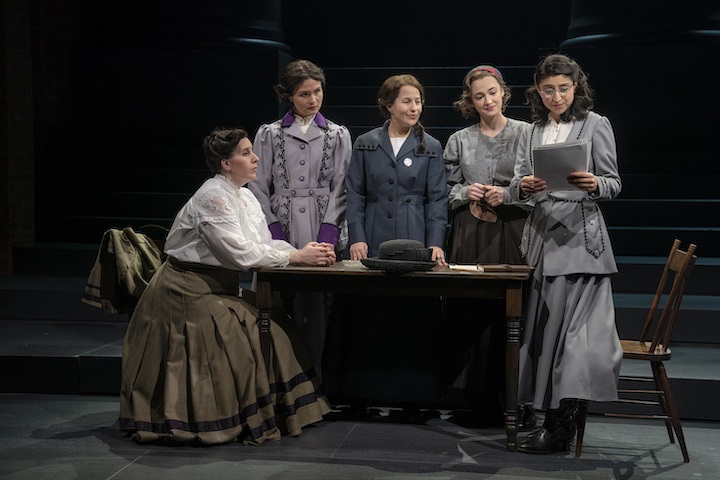 The more things change, the more they stay the same. Dispiritingly, this could serve as the through-line for Shaina Taub‘s excellent new musical, Suffs, running through May 5 at The Public Theater. In bringing to light the impassioned struggle for women’s right to vote, the musical also reveals how much ground we still have left to gain more than a century later.

There is much to love in this powerhouse production. For starters, it boasts an all-woman and non-binary cast, including Broadway stars Phillipa Soo of Hamilton and Come From Away’s Jenn Colella. Ms. Taub does most of the show’s heavy-hitting as youth agitator Alice Paul, who bucks against not only misogynist-in-chief Woodrow Wilson (Grace McLean) but the old guard led by Carrie Chapman Catt (Colella). 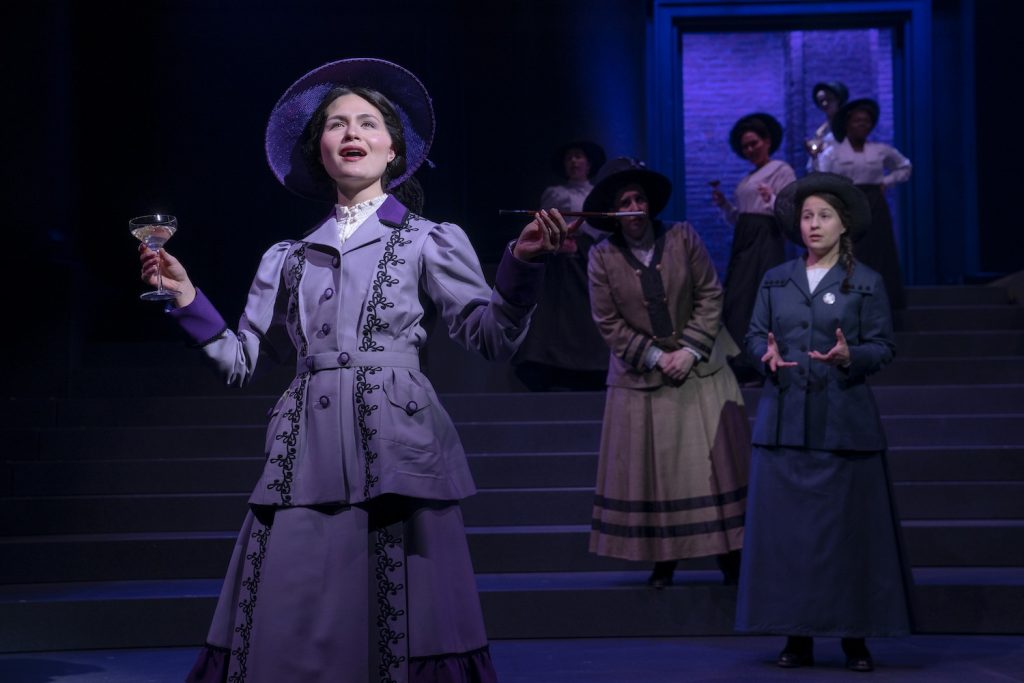 While some of the actors are gender-blind cast as men — including Woodrow’s campaign manager Dudley Malone (Tsilala Brock) and Harry T. Burn (Jenna Bainbridge) — all adopt masculine personas when called for, referred to in the play’s notes as “their own male clown character.” This adds a vaudevillian texture to the proceedings.

Comic though that may be, the production makes it quite clear that the women’s suffrage struggle was no joke. While Catt’s crew may have been content securing the right to vote state by state, when young Alice Paul meets her, she muses, “She thinks 11 states in 60 years is a victory?”

So, when she’s accidentally handed the key to Catt’s Washington, DC, office, Paul begins to organize a suffrage march down Pennsylvania Avenue to “stand up and demand … our rights.” Her country needs her, even if they don’t know it yet. “I’ll be the one to finish the fight,” she vows. She is savvy enough to realize that a pretty face gets the most clicks, inducting socialite Inez Milholland (Soo) to hop on a white steed and lead the march as “a feminine reclaiming of the armored knight.”

Gruff Polish labor activist Ruza Wenclawska (Hannah Cruz) enlists the labor movement in the fight for the passage of the 19th Amendment, and Ida B. Wells (Nikki M. James) and Mary Church Terrell (Cassondra James) bring women of color into the mix. Inez voices Frederick Douglass’ words, “Power concedes nothing without a demand,” but the Black activists know that much of that is just posturing. Of course, they are relegated to the back of the march to “not offend Southern contingents.” It is heartwrenching to hear them being told to “wait your turn,” especially because a hundred years later, they are still waiting their turn, navigating a thicket of anti-democratic voting laws and racist gerrymandering.

“Since when does a radical roll over for bigots in the first place?” asks Wells, the famed anti-lynching journalist. “That’s not leadership, Alice. It’s cowardice.” 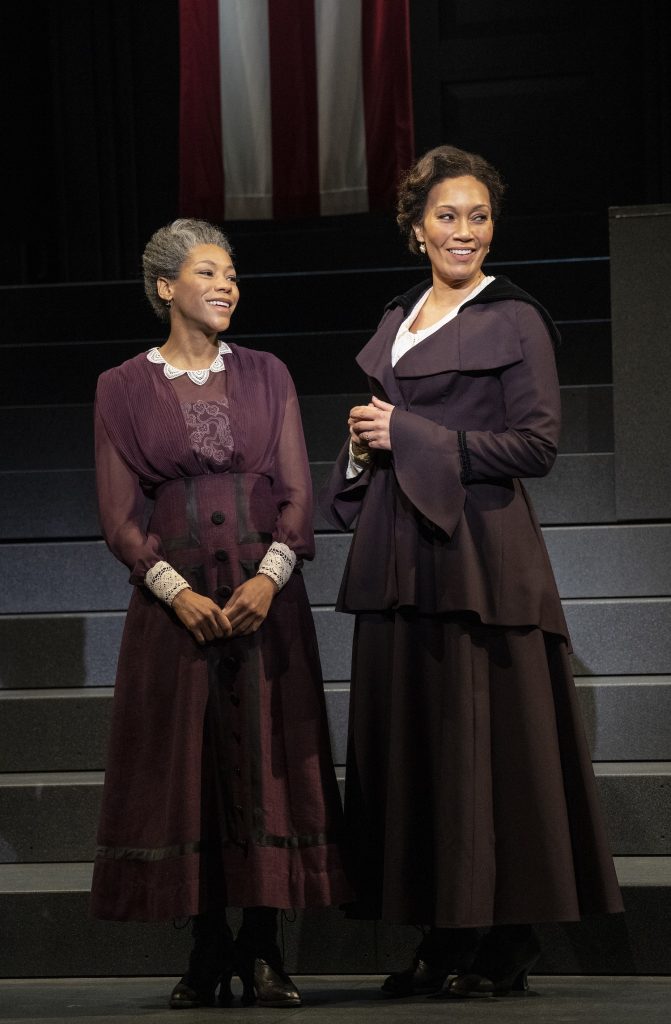 Paul shows her spine by facing down a Southern president who initially placates the women, then turns the cops’ batons on them. She and her cohorts serve six months’ prison time being beaten, isolated, and force-fed for their silent protest, holding aloft Wilson’s own wartime words, “We shall fight … for the right of those who submit to authority to have a voice in their own government.”

The heartbreaks fly with rapid-fire progression, from the suffragist in-fighting to the systemic injustices to the overarching racism, right down to the casual male violence served up as a matter of course to these brave women. Disappointments, deaths, and disavowals mount, but Paul keeps her eyes on the prize as her dignity is repeatedly deferred.

In the end, the suffs do win the vote, although it is very hard-earned. And just as Catt tried to upbraid Paul, so does Paul find herself talking down to the next generation who rallies for the Equal Rights Amendment. She realizes the fight she vowed to finish will never truly be finished. A hundred years later, we still fight for the right to vote — for workers, the poor, Blacks, immigrants, and indigenous people — from the same men who have always held the power. As Paul and her suffs sing, “Let the tyrant burn until our oppression is gone … Let the fire rage on.” It rages still.

At nearly three hours with a short intermission, the musical has the heft to easily transfer to Broadway, where it should receive a robust reception. After all, Hamilton had its start in this same theater, and there is little preventing Suffs from realizing that fame. Who knows? Perhaps it will even help inspire a new generation to protect voting rights in our increasingly fragile democracy.

Suffs
The Public Theater
425 Lafayette St. NYC
Through May 5

Winnie McCroy is a longtime arts & entertainment writer who lives in Brooklyn with her wife. For more of her reviews, visit winniemccroy.com.