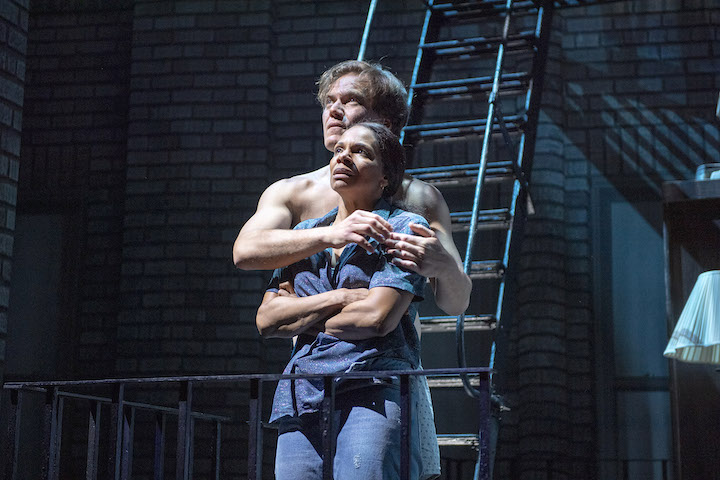 As anyone with a smattering of French knows, the title of Terrence McNally’s 1987 romantic two-hander, Frankie and Johnny in the Clair de Lune, which incorporates the name of a poem by Verlaine and a musical movement by Debussy, means Frankie and Johnny in the Moonlight. For all the play’s lunar allusions, however, moonlight little becomes the play’s dullish Broadway revival, even with such starry names as Audra McDonald and Michael Shannon as the eponymous leads.

Originally seen Off-Broadway with F. Murray Abraham and Kathy Bates, the play was followed by a 1991 film (simply Frankie and Johnny) with Al Pacino and Michelle Pfeiffer, and a 2002 Broadway revival starring Stanley Tucci and Edie Falco (The True). However, never before the current production, unexcitingly directed by Arin Arbus, did I sense how attenuated is the play’s central situation. Given today’s flood of 90-minute plays, this two-hour-and-15-minute revival could have used a trip to the editorial barbershop.

Frankie and Johnny are two lonely coworkers in their 40s who meet at a diner. He’s a recently hired short-order cook with a somewhat shady past, and she’s a failed actress-turned-waitress. After their first date, they’ve returned to her one-room flat in Hell’s Kitchen (she prefers the name Clinton), where, when the play begins, they’re engaged in an extended lovemaking session culminating in mutual satisfaction.

With that out of the way, she, mainly in a frumpy bathrobe, he, in boxer shorts (costumes by Emily Rebholz), get to know each other in a series of sporadically amusing, occasionally raunchy, encounters. Despite the alluring names attached to some of those who’ve played these roles, Frankie and Johnny are rather ordinary. This requires its female stars, in particular, to downplay their glamor, which McDonald (who has a brief, shadowy, nude scene) more or less manages to do.

Johnny, desperate for love, is certain he’s found his life partner in Frankie and spends much of the play insisting she believes him and responds in kind. She, however, has been burned too many times and refuses to succumb to his persistent expressions of love. When she’s finally had enough of these, Frankie asks him, with increasing degrees of urgency, to leave. He refuses, however, even when she threatens to call the cops or scream out the window.

Since we’re supposed to surmise that she really wants him and that her vehement protests are merely coy coverups, it’s impossible in this #MeToo moment not to feel the work’s retro politics, especially in a play packed with 80s cultural references. And Shannon, who carries the baggage of so many creepy roles, lacks the charm that might short-circuit such a reaction.

By the end of Act One, Frankie and Johnny have had their ups and downs and come to a pleasant enough resolution of their differences. It’s easy to wonder why we need to return after intermission. Act Two fails to satisfy that question, stretching the situation out to where the play loses most of its dramatic interest and becomes little more than fodder for star performances.

Of those, the multi-Tony-winning McDonald creates the more believable character, capturing Frankie’s native, if ill-educated, intelligence, emotional hesitancy, and vulnerability. Shannon’s Johnny sometimes seems to be forcing it, though, never quite crossing the border from performing to being. (More convincing is an uncredited radio announcer’s voice, surely that of the original Johnny, F. Murray Abraham.)

Both stars would have benefited from a less expansive, more intimate set than the one Riccardo Hernandez has provided. It spreads what, in life, would be a closet-sized apartment across a space in which the upstage doors are set, not in an interior wall but, oddly, in a towering brick one representing the building’s facade. (For whatever reason, that wall moves slowly upstage at the end.)

Lighting designer Natasha Katz bathes some scenes in enchanting moonlight, but the production itself barely glows.