Top Posts
‘Company’ to Hit the Road on North American...
Meet the Full Cast of ‘Shucked,’ Coming to...
Full Cast for ‘Parade’ Announced
Stephen McKinley Henderson Gives the Performance of His...
The McKittrick Hotel Announces the Return of ‘The...
Broadway Stars Honored with Academy Award Nominations
Taylor Trensch, Danny Wolohan, and More Join the...
A Gay Road Trip Comes to The Brick...
Maude Apatow of ‘Euphoria’ is the Next Audrey...
Tony Award Winners to Star in ‘Hercules’ at...
Home Reviews Review: ‘Don’t Do This to Us!’ Attempts a Sharp Satire That Doesn’t Deliver
Reviews 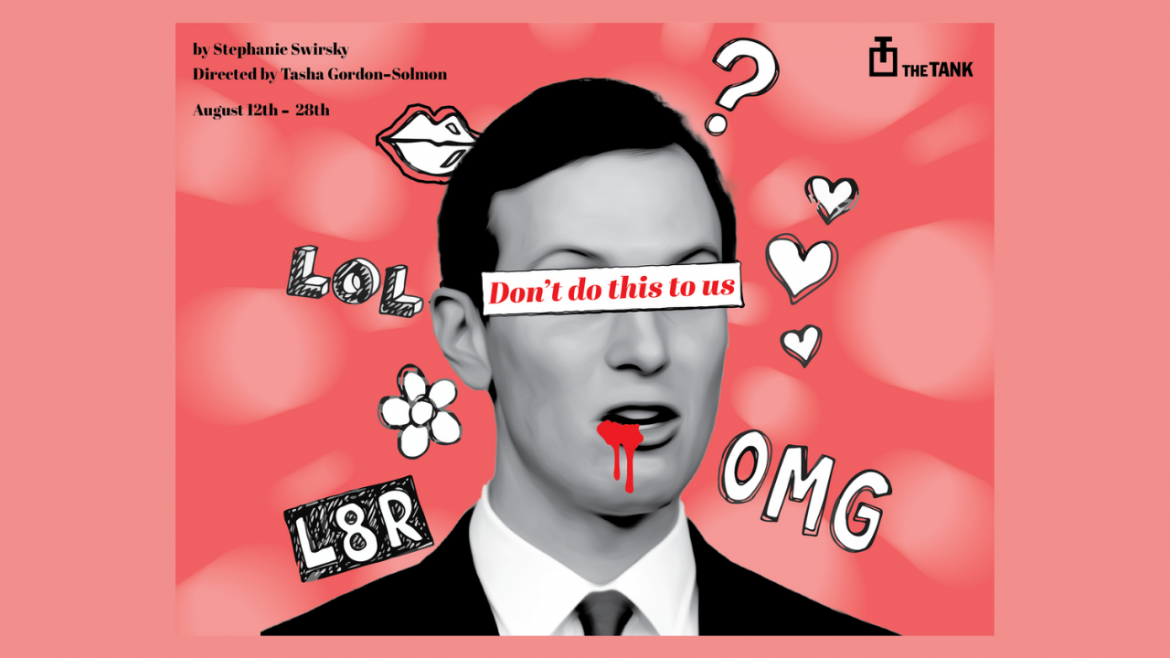 The point of Stephanie Swirsky’s Don’t Do This to Us! is clear, but the pay-off — even at its modest time commitment of 100 minutes — is ultimately not worth it. Although it has an auspicious premise, its delivery of antisemitic satire often lands with a thud, causing theatergoers to question whether it’s okay to laugh (particularly when the jokes are based around the Holocaust).

Mara Kassin stars as Rachel, a current day, unemployed lawyer who is dismayed by the level of antisemitism in the United States. Most of her blame is targeted towards Jared Kushner (Grant Harrison), the real-life son-in-law and Senior Advisor to former President Trump. Lamenting to her energetic friend, Ravit (Rivka Borek), Rachel hatches a plan: she’ll turn the clock back to 1999 and seduce Kushner. After all, Ravit’s friend, Shira Schwartz (Lilli Stein) knows him. Since Kushner has given Jews around the world a bad reputation, she’ll break his penis and consequently, he won’t marry Ivanka Trump.

Swirsky is exploring similar concepts. By illuminating the stereotypes of Jewish people, she hopes to reflect how misguided and wrong our prejudices are while highlighting the fact that Kushner adopts all of these negative traits. Yet the effect is stunted by lackluster comedy and preposterous scenarios that swerve into grotesque territory.

Director Tasha Gordon-Solmon has assembled a quality cast, but they all deserve better material. The major issue here is a lack of focus and a driving narrative. Is it straight forward satire? More surrealist? Absurdist?

One must applaud the courage and originality it takes to create new theatrical works. This however, like Jared Kushner himself, feels lifeless and flat.

Don’t Do This To Us!
Running now through August 28 at The Tank
Tickets available here

Ryan Leeds is a freelance theater, food, and nightlife journalist who lives in Manhattan. He is the Chief Theater Critic for Manhattan Digest and a contributor to EDGE Media Network, The Broadway Blog, Queerty, and LGBTQ Nation.  Follow him on Twitter, Facebook, or Instagram.