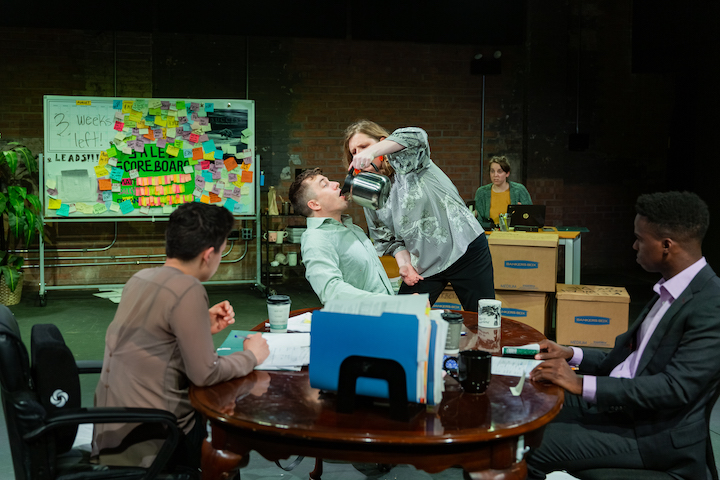 Decent, cynically funny ideas and solid performances emerge from Human Resource(s), a world premiere black comedy from playwright Sara Means, though not much can be found about the newly emerging author, other than her status as a BFA recipient from Sam Houston State University in Texas. Whatever her previously undiscovered origins, she has a natural affinity for tragicomedy and the real ways in which corporate America dehumanizes its ultimately powerless employees.

Theatre EVOLVE offers Chicago storefront theater lovers a first look at playwrights who may (or may not) be set to make a splash across the larger theater landscape. Human Resource(s) provides a promising glance into what could be Ms. Means’ career niche as a Shirley Jackson-esque social satirist.

The play is set in what feels like a suite of cheap offices in a strip mall industrial park. Some of this aesthetic is owing to frequent references to “corporate” by the small cast of characters who, through calculated details, give off an “anybody in the suburbs or off the highway” je ne sais quoi. The depressingly dated office equipment and furniture add to the run-down vibe in which this soulless monotony represents a “good job” that, at the very least, offers happy hour escapism. The success in setting this scene with limited resources and space is a credit to director Jen Sloan and her production team.

No matter what year it is, no matter race or gender, we have all had a boss like Trudy (Andrea Uppling). Hard-ass, self-involved, and a natural salesperson who’s achieved just enough success to completely lose touch with reality, Trudy now makes the bulk of income off the performances of her junior team members. She deploys the uninteresting but effective tactic of fear to sustain her own precarious social and economic position.

For the sake of the play’s driving plot device, Trudy gleefully administers a Lord of the Flies-style sales “competition,” which serves to divide, conquer and dehumanize the source of her livelihood. The members of the hungry and desperate sales staff turn on each other in a make-or-break situation that ends in reward (a vaguely promised promotion to “corporate”) or punishment (the loser gets fired). Human Resource(s) gives off the unpleasant human stench of a post-apocalyptic reality show: The Apprentice meets The Hunger Games. 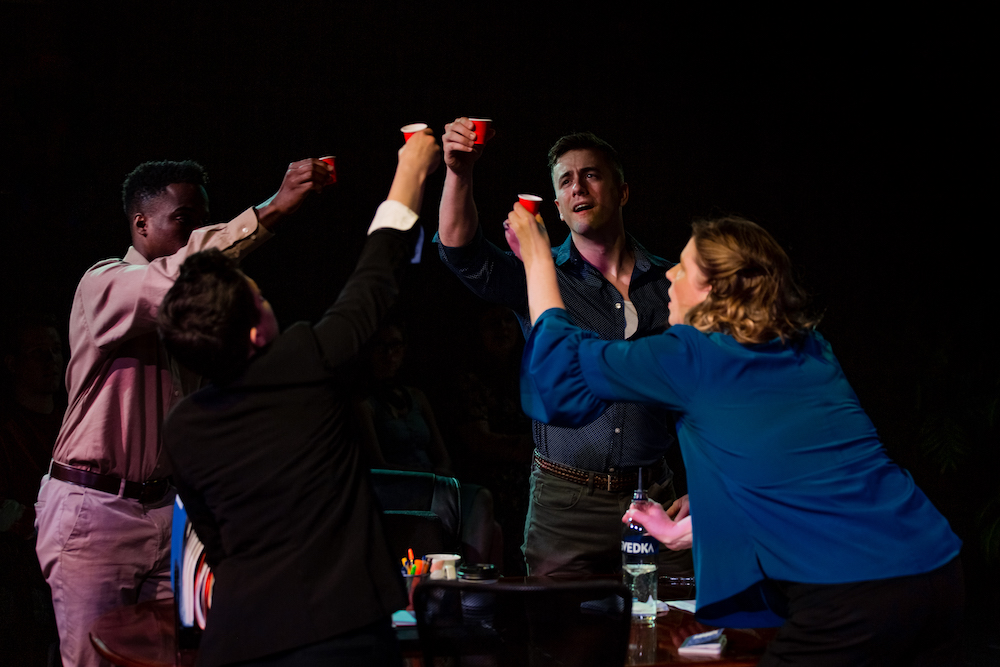 The well-cast ensemble executes its broadly stereotypical roles with panache. Trevor Strahan nails his character Matt’s encroaching, The Wolf of Wall Street, seemingly coke-fueled madness. Mr. Strahan is all bug eyes and bulging veins in his expression of the dominant but threatened white male corporate psyche: all panicked, overt misogyny and latent racism. Shanna Sweeney’s Alice, the office’s saintly workhorse, injects her performance with just enough frayed anger to indict the character in the team’s moral and physical collapse.

Most interesting is Jonathan Allsop’s sales newbie Dylan, who devolves from “aw shucks” nice guy to a boorish, patronizing shark in record time. Is this transformation inevitable nature or Trudy-induced nurture? Neither the script nor Mr. Allsop’s performance gives it away.

In an intermissionless 90 minutes, Human Resource(s) morphs from light office comedy to dark absurdity when one of the team members is literally stabbed in the back. There is a whodunit that turns out to be nothing but human self-destruction in the face of real or imagined loss. It takes The Drew Carey Show to Fight Club.

Why so many pop cultural references in this review? Because they all occurred to me as I watched Human Resource(s). There is a fine line between inspiration and derivative, and while the production’s overall experience is successful, it’s a good synthesis of what has come before. Ms. Means’ writing suggests that she has more to say, and it promises to be engagingly original. From its pedestrian title to its Tarantino-influenced ending, Human Resource(s) meets but does not exceed expectations, sort of like another day at the office with the hopes of something more.