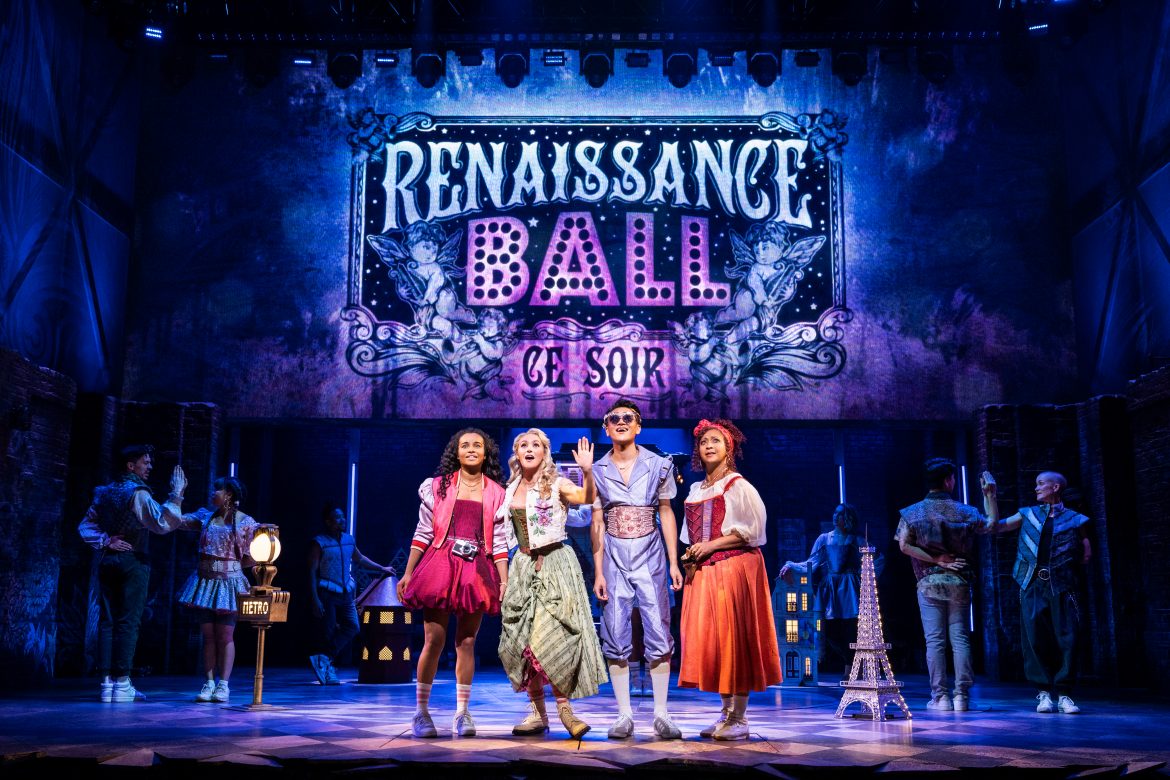 You will resist the charms of & Juliet for ten minutes—maybe fifteen, tops.

This exuberant new jukebox musical, now open at Broadway’s Stephen Sondheim Theatre, imagines the continued exploits of a liberated Juliet if she survived Shakespeare’s classic work. Here, Juliet thrives in a post-Romeo world, fleeing Verona with her nurse to live it up in Paris—until, of course, the past catches up with her.

Alongside Juliet’s story & Juliet also follows, in a witty if slightly less engaging meta-textual story line, Willy Shakes and with wife Anne Hathaway fighting over how Juliet’s tale will end. The pair insert themselves into events as various characters in Juliet’s orbit, battling over her fate as they work through some issues of their own.

David West Read’s book is light and fun, but the real pleasure here is the stupendous musical numbers. Drawing from the catalog of Swedish producer Max Martin, & Juliet builds absurdly joyous sequences from an endless array of electrifying pop hits: “Larger Than Life,” “I Kissed A Girl,” “Everybody” and “Roar” to name just a few.

Some songs transpose onto the story’s wacky twists and turns more comfortably than others, but it scarcely matters. You need only lean into the silliness of the whole enterprise. This is fun for fun’s sake, and thanks to Luke Sheppard’s ebullient direction and Jennifer Weber’s punchy choreography, the show pulls it off completely.

It’s hard to even pick any standouts in an ensemble this strong. Lorna Courtney is a powerhouse as Juliet, her vocal heights simply jaw-dropping. Melanie La Barrie and Paulo Szot enjoy themselves immensely as the Nurse and her love interest, Lance. Betsy Wolfe carries the show’s weaker Will/Anne storyline with a wink and smile. The subplot proves worthwhile just for Wolfe’s electrifying delivery of her eleven o’clock number, “That’s the Way It Is.”

Also adorable are Philippe Arroyo and Justin David Sullivan as queer lovers Francois and May. Sullivan, a tremendous talent, is a non-binary and genderqueer performer. Though it is thrilling to see such matter of fact non-binary representation on a Broadway stage, May’s journey could have used more fleshing out. The intention behind utilizing, “Not A Girl, Not Yet A Woman” as May’s big number feels unclear, and the character is then backgrounded in the second act, leaving the details of their journey to self-discovery a bit vague.

& Juliet is a very dumb show in many respects, but immensely satisfying and just a ton of fun. Don’t bother trying to resist—you will have a blast.