The cast of ‘Lips Together, Teeth Apart’ (photo: Joan Marcus via The Broadway Blog.)

Late in Terrence McNally’s Lips Together, Teeth Apart, we learn that the title refers to a mantra suggested by a dentist for those who grind their teeth at night. Some may begin to follow those instructions as the final act of this 1991 dramedy’s first New York revival, at the Second Stage Theatre, grinds endlessly toward its conclusion.

Originally staged with a memorable ensemble of Nathan Lane, Christine Baranski, Swoosie Kurtz, and Anthony Heald, for whom (apart from Kurtz, who replaced Kathy Bates) McNally specifically wrote the play, it is now being given under Peter Dubois’s direction in a middling production that only now and then, like the fireworks that illuminate the last act, brightens the sky (thanks to Justin Townsend’s lighting and Fitz Patton’s sound design). Most of those amusingly comedic explosions come from the play’s most impulsive character, Chloe Haddock, played by an irrepressible, if too young, Tracee Chimo. Chloe, a community theater enthusiast with three children, covers her emotional turmoil with relentlessly upbeat joie de vivre, popping off a firecracker chain of poses, attitudes, and mugging interspersed with musical theater highlights; one is a sweetly corny rendition of Miss Adelaide’s “A Bushel and a Peck” from Guys and Dolls to which no one else pays any attention. The locale is an exquisite Fire Island beach house, perfectly designed by Alexander Dodge, recently bequeathed to Sally when her gay brother, David, died of AIDS. The houses on either side are occupied by attractive gay men (unseen), which offers opportunities both for humorous commentary by the two straight couples, but also for an exploration of homophobic unease and simmering anxiety about the possibilities of being infected. A shimmering swimming pool sits downstage but no one uses it; the discomfort created by ignorance about AIDS is as pervasive as that regarding Ebola. This is about as timely as the now somewhat dated play gets.

For much of the time, Sally watches the ocean and worries as a man seems to be drowning, yet no one does anything until it’s too late. This ties in to the theme of people failing to reach out a helping hand to others in times of crisis. McNally does what he can to create drama from the couples’ shaky marriages, John’s recent discovery that he’s dying of cancer, Sally’s difficulties in bringing her pregnancies to term, and a not-so-secret affair that John and Sally once had.

Death, in one form of another, keeps rearing its head, including a sequence about the zapping of bugs. It’s all rather thin and dependent on forced interactions (a fight between Sam and Austin, for example) and character quirks, like Sam’s issues with words he doesn’t know and Sally’s mangling of movie and song titles. A good deal of time is wasted on a Charades sequence when Sally tries to act out what she thinks is “There’s No Business like the Show Business.” Lacking truly funny actors, there’s not much to laugh about.

With very little actual plot to sustain interest and a group of self-centered, alienated characters—whose isolation is made even more palpable by the use of action-freezing monologues—sticking around for two and a half hours (with two intermissions no less) is something of an endurance test. Perhaps, if all the performances were superlative, there would be less empty seats at the end. As the man seated next to me said as he rushed out after the second act, “There’s nothing keeping me here anymore.” Had he waited, perhaps he’d have begun chanting, “Lips together, teeth apart.”

Samuel L. Leiter is Distinguished Professor Emeritus (Theater) of Brooklyn College and the Graduate Center, CUNY. He has written and/or edited 27 books on Japanese theater, New York theater, Shakespeare, and the great stage directors. For more of his writing, visit Theatre’s Leiter Side (www.slleiter.blogspot.com). 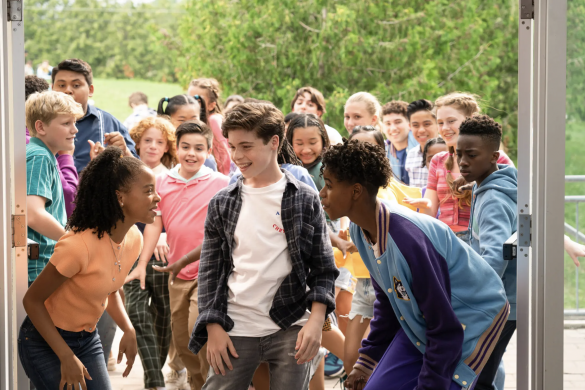