Top Posts
‘Company’ to Hit the Road on North American...
Meet the Full Cast of ‘Shucked,’ Coming to...
Full Cast for ‘Parade’ Announced
Stephen McKinley Henderson Gives the Performance of His...
The McKittrick Hotel Announces the Return of ‘The...
Broadway Stars Honored with Academy Award Nominations
Taylor Trensch, Danny Wolohan, and More Join the...
A Gay Road Trip Comes to The Brick...
Maude Apatow of ‘Euphoria’ is the Next Audrey...
Tony Award Winners to Star in ‘Hercules’ at...
Home Buzz Review: Stalking the Bogeyman
BuzzReviews ‘Stalking the Bogeyman’ (photo: Jeremy Daniel via The Broadway Blog.)

Markus Potter’s gripping drama of revenge and absolution, Stalking the Bogeyman, a cross between conventional theater and docudrama, is based on an autobiographical story by award-winning journalist David Holthouse. It first appeared as a published essay and was later featured on NPR’s “This American Life” in 2011, where Potter first learned of it while driving in his car.

Holthouse, the victim of a childhood rape by a teenage boy, kept the horrific experience secret for twenty-five years, only his therapist knowing of it. Unable to shake his abhorrence of the perpetrator, he carefully planned his murder. Ironically, the long-held secret of the rape (which he insists should not be called “molestation”), replete with its dark recesses of a simmering desire for bloody vengeance, is now being publicly enacted in an Off-Broadway theater. (The play premiered at the North Carolina Stage Company last year.) The successful dramatization (which includes additional writing by Shane Zeigler, Shane Stokes, and Santino Fontana), owes as much to Potter’s effective narrative structure as to its thoughtful staging, design and excellent ensemble. Roderick Hill in ‘Stalking the Bogeyman’ (photo: Jeremy Daniel via The Broadway Blog.)

The outlines are simple. In 1978, when Holthouse was seven, he and his parents, Robert (Murphy Guyer) and Nancy (Kate Levy), move to Anchorage, where they are befriended by neighbors, Russ (John Herrera) and Carol Crawford (Roxanne Hart), names I’m assuming are fictional. The Crawfords’ son, referred to only as the Bogeyman (Erik Heger), is a seventeen-year-old high school athletic star. One night, while their parents are playing cribbage, David and his new friend repair to the basement to hang out. The Bogeyman, whose playfulness borders on the pathological, soon asserts a half-serious, half-kidding sadistic dominance over the bewildered and frightened child; then, impulsively, he initiates a sexual attack. The action freezes as David recites the painful details.

David narrates the story, with flashbacks to particular moments along the way. It is not hard to imagine the play being written entirely as a monologue, with a versatile actor playing all the parts. The action moves through the years as the characters grow older; the true relationship between David and the Bogeyman, alienated as it becomes, remains invisible to everyone else.

Life moves on, the Bogeyman becomes a cheap suit salesman and David winds up as a journalist in Denver, where he sees a shrink, Dr. Leavitt (Hart), as he struggles to deal with the psychological fallout from his boyhood tragedy, fearing he may himself develop pedophiliac desires. Despite Dr. Leavitt’s advice, he cannot bring himself to tell his parents about what happened. Meanwhile, having learned that the Bogeyman has moved to Denver and convinced he must be victimizing other kids, David begins methodically to plot his killing, visiting a gun seller/ballistics expert (Guyer) and a Latino gangster (Herrera); the latter, whom he met as a Gonzo reporter, sells him a firearm and silencer. Eventually, in 2004, the gun-toting 33-year-old David and the 43-year-old Bogeyman have their fated encounter, and one of the more emotionally powerful and sensitively acted scenes now on any New York stage ensues.

Stalking the Bogeyman is performed in David Goldstein’s expansive set of high walls covered with a disparate array of shelves, overflowing with domestic and personal gatherings of multiple locales, and with a steep staircase at one side suggesting multiple levels. Cory Pattak’s deftly imaginative lighting illuminates its nooks and crannies while superbly isolating and shadowing the actors as they move about under Potter’s consistently precise blocking. Tristan Raines’s costumes look just right, and Erik T. Lawson provides an exceptionally creative sound design.

Each performance is authentic. Guyer moves with ease between the good dad and the cautious gun seller, while Levy is every inch the loving mom. Herrera’s three roles as the bluff neighbor, a pedophiliac Little League coach and an Arizona gangbanger are notable, and Hart is convincing as both the Bogeyman’s mother and David’s analyst. Hill accomplishes the difficult task of being both an innocent child and a determined adult, and Heger perfectly makes the transition from a teenager with arrested development to a middle-aged man burdened by the weight of something he once did but cannot himself comprehend.

There are few weak spots in this expertly charted trip through the waters of recollection, retribution and remorse. One flaw might be the play’s recourse to the artificial device of staging a scene that soon is revealed as what might have—but did not—happen; once is acceptable, twice is not. Another is casting the Bogeyman with an actor who, even when his antagonist matures and fills out, remains considerably more imposing despite dialogue suggesting their disparity in size is no longer an issue. These are niggling concerns, however. Stalking the Bogeyman deserves to be seen. Samuel L. Leiter is a Distinguished Professor Emeritus (Theater) of Brooklyn College and the Graduate Center, CUNY. He has written and/or edited 26 books on Japanese theater, New York theater, Shakespeare, and the great stage directors. For more of his writing, visit http://slleiter.blogspot.com. 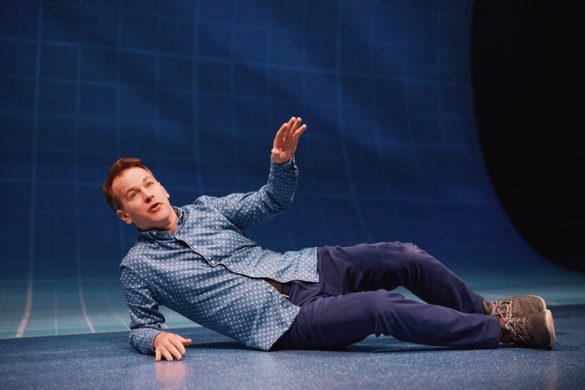