Kate Lydic and Hamish Allan-Headley in “The Belle of Belfast” (photo: Carol Rosegg via The Broadway Blog.)

The Belle of Belfast, a little firebomb of a play, is now detonating eight times weekly at the Irish Repertory Theatre in one of the best acted productions I’ve seen at this venerable Off Broadway venue. Set in 1985 during “the troubles” in Belfast, where a production would probably cause protests, it sounds to these non-Irish ears—especially in the company’s finely honed accents—about as Irish as anything by Martin McDonagh; this despite playwright Nate Rufus Edelman (whose program bio says he’s “a proud member of the Choctaw nation) being from Los Angeles, where the play premiered at Ensemble Studio Theatre-LA in 2012. Edelman did study, however, at Trinity College Dublin, where—supplemented by visits to Belfast itself—he picked up enough of Belfast’s lingo and politics from his Belfastian flat-mate to convincingly pen this Irish hot potato. Kate Lydic and Arielle Hoffman in “The Belle of Belfast” (photo: Carol Rosegg via The Broadway Blog.)

At the heart of the 85-minute, one-act play is the simmering relationship between a hotheaded redhead, 17-year-old Anne Molloy (Kate Lydic), and Ben Reilly (Hamish Allan-Headley), a devout, sincere, and all-too human, 35-year-old priest. The seething Anne, who “has a mouth on her that would make a Dublin junkie blush,” as the alcoholic priest, Father Behan (Billy Meleady, who created the role in L.A.), describes her, was orphaned as a child when her parents were accidentally killed in an IRA bombing aimed at Protestants, seven of whom also died. Anne—infuriated and depressed by the senseless conflict—has become a boundary-testing teen with no qualms about using bad language in the confessional (where “feck” passes, but its close cousin is verboten) or seducing Ben, who immediately suffers a crisis of faith. Their liaison serves as a premise on which to explore other issues as well, including the meaninglessness of Northern Ireland’s political violence and its clergy’s skewed perspectives.

Of particular interest is the priests’ private earthiness, not merely because Behan is a drunk and Reilly a heavy smoker. These priests even hesitantly share the confidences they’ve heard in the confessional. Behan is particularly memorable, especially as realized in Billy Meleady’s electrically authentic performance. He represents the deep Northern Irish Catholic hatred of Protestants, which makes Anne’s parents heroes (“collateral damage” he calls them) just because they died in the wrong place at the wrong time. Even Ben admits to feeling proud when Anne’s parents became martyrs, but this was before Anne helped him have a change of heart.

Reilly and Behan take as much pride in being patriots as priests, seeking a united Catholic Ireland at any cost. When two Catholic teens become bombing victims, all the unsympathetic Behan can offer is: “He was a poof and she was a slutty bitch.” He wishes he could be sent away from Belfast’s dreariness to the seaside town of Donegal; why not, since another priest was transferred there as punishment for molesting boys (somewhat anachronistically, considering that priestly pedophilia was not yet a widely exposed issue)? Yet, for all his bonhomie, after taking a bribe to hear his friend’s confession, he erupts in unbridled, compassionless fury when he learns of Ben’s mortal sin. Hamish Allan-Headley and Billy Meleady in “The Belle of Belfast” (photo: Carol Rosegg via The Broadway Blog.)

The Belle of Belfast is laced with humor. Partly, this stems from the misguided confession of Anne’s caretaker, her slightly batty great aunt Emma (delectably handled by Patricia Conolly), who seeks weekly absolution for what she erroneously considers her sins, which more likely are those of others. Even serious scenes have laughs threaded through them, like those between Anne and her chubby, overeating schoolmate, Ciara (an excellent Arielle Hoffman), whose Catholic morals are shocked by what Anne divulges.

For all its punch, the play leans a bit on melodramatic contrivances, although to expose them would lead to spoilers. Still, the vigorously stageworthy dialogue, the heated issues broached, the colorful characterizations, and the uniformly three-dimensional acting satisfactorily cover the holes.

Lydic is TNT as the troubled, outspoken Anne, her fiery outspokenness nicely offset by the reserved suffering of Allan-Headley’s Reilly. All the performances are precisely calibrated under the incisive direction of Claudia Weill (who also directed its L.A. premiere), complemented by John McDermott’s split-stage, outdoor-indoor setting, Justin Townsend’s capable lighting, Terese Wadden’s appropriate costumes, and Jeff Larson’s projections. This is good theater. And that’s the fecking truth. 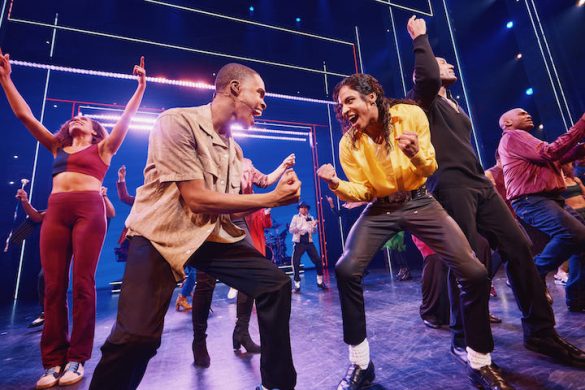