Top Posts
‘Company’ to Hit the Road on North American...
Meet the Full Cast of ‘Shucked,’ Coming to...
Full Cast for ‘Parade’ Announced
Stephen McKinley Henderson Gives the Performance of His...
The McKittrick Hotel Announces the Return of ‘The...
Broadway Stars Honored with Academy Award Nominations
Taylor Trensch, Danny Wolohan, and More Join the...
A Gay Road Trip Comes to The Brick...
Maude Apatow of ‘Euphoria’ is the Next Audrey...
Tony Award Winners to Star in ‘Hercules’ at...
Home Beyond Broadway Review: The Invisible Hand
Beyond BroadwayReviews A scene from ‘The Invisible Hand’ (photo by Jery Naunheim Jr. courtesy of The Repertory Theatre of St. Louis.)

Compared to what probably goes on in actual bunkers where kidnapped victims of Muslim extremists are kept in an effort to extract ransom from their families or governments, the conditions depicted in Ayad Akhtar’s gripping The Invisible Hand seem downright cozy. Yes, the protagonist, an American banker named Nick Bright (Justin Kirk), is usually handcuffed (and later footcuffed), and yes, he’s often screamed at and humiliated. Nonetheless, his sometimes threatening, sometimes palsy Pakistani captors don’t physically torture him; when the possibility of beheading is raised, these guys say that, if the need arises, they’ll farm out the job to a group they refer to as “animals.” They disdain being called terrorists, declare that the Taliban hates them, and profess to have socially positive goals (water, roads, schools, etc.) for their people. So friendly does the relationship become between Nick and his assigned captor, Bashir (Usman Ally), that they even engage in boyish chatter about which of the girls in the comic book Archie is sexier, Veronica or Betty.

If this sounds implausible, how about the central premise? Nick—mistakenly snatched instead of his boss—convinces his dangerously passive-aggressive abductors to let him use his outstanding stock trading skills by raising the millions they demand from Citibank before they’ll let him go. Farfetched as this seems on paper, Akhtar, through his believable characters and dialogue, creates a world in whose monetary machinations you find yourself acquiescing while remaining absorbed in Nick’s ultimate fate. Along the way, though, Akhtar provides so much background on economic theory and practice that the play only narrowly escapes the peril of morphing into a lesson on global financial practices. The title, in fact, comes from Adam Smith’s 18th century treatise, The Wealth of Nations, where, as Nick explains it: “The free market is guided by the confluence and conflict of everyone’s self-interest, like an invisible hand moving the market . . .” Greed is another word for self-interest, and it spreads like cancer even among the holier than thou. Akhtar, whose Pulitzer Prize play, Disgraced, is presently on Broadway, reveals with The Invisible Hand that he’s no flash in the playwriting pan. He produces powerful dramatic situations from topical material and then creates ironically pointed twists and turns, with deft humor seasoning the atmosphere. Akhtar’s villains here are human beings, not stereotypes, and, while we may disagree with their actions, we’re absorbed by the clash of their ideas with those of their prisoner.

Most fascinating is the London-raised and Cockney-accented Bashir, an angry bloke whose initial ignorance of market methods is quickly overcome when—using a computer under Nick’s guidance—he becomes obsessed by his newly acquired monetary power. Bashir’s potentially violent temperament, combined with his knowledge of history and his newfound economic skills, make him a magnetic figure. Usman Ally’s seething intensity in the role is matched by Justin Kirk’s astuteness and desperation as the cash cow detainee. Dariush Kashani’s Imam Saleem, the religious leader in charge of the operation, has a pious dignity that sheathes a deadly ruthlessness made all the more frightening by being understated. Jameal Ali is Dar, the subservient guard Nick teaches how to profit from his potato harvest; the scene in which he must carry out a brutal order is a chilling highlight.

Ken Rus Schmidt’s taut direction—aided by Leah Gelpe’s brilliant percussive sound design—keeps the tension high throughout the play’s two hours. Set designer Riccardo Hernandez has provided two large prison cells, one of bare concrete, the other with tall metal walls under a shiny corrugated ceiling that hangs low over the audience early in the play and then rises to the rafters for Act 2. Finally, distinctive lighting by Tyler Micoleau and convincing costumes by ESOSA help bring The Invisible Hand to very visible life. 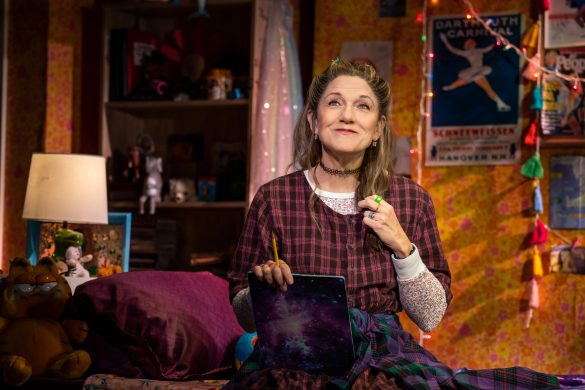