Top Posts
‘Company’ to Hit the Road on North American...
Meet the Full Cast of ‘Shucked,’ Coming to...
Full Cast for ‘Parade’ Announced
Stephen McKinley Henderson Gives the Performance of His...
The McKittrick Hotel Announces the Return of ‘The...
Broadway Stars Honored with Academy Award Nominations
Taylor Trensch, Danny Wolohan, and More Join the...
A Gay Road Trip Comes to The Brick...
Maude Apatow of ‘Euphoria’ is the Next Audrey...
Tony Award Winners to Star in ‘Hercules’ at...
Home Beyond Broadway Review: The Jacksonian
Beyond BroadwayReviews

Contributor Lindsay B . Davis takes a hard look at family disfunction through the lens of award-winning playwright Beth Henley. There is a moment in The Jacksonian, Pulitzer Prize winning playwright Beth Henley’s latest play presented by The New Group at the Acorn Theatre, when 16-year-old Rosy Perch (newcomer Juliet Brett in a breakthrough performance) sits at a seedy motel bar table hunched over a piece of Baked Alaska. Her face is close to the cake and the whipped cream peaks look like an extension of the acne in full bloom on her face. Rosy picks at it with little interest under the penetrating eye of a lascivious bartender Fred Weber (Bill Pullman) who grabs the plate and fork to suck down a bite of cake himself. This is not a girl who gets to enjoy dessert. Henley (Crimes of the Heart, The Wake of Jamey Foster, The Miss Firecracker Contest) clearly has an appetite for humor in the bleakest of places.

Rosy is heavily burdened by events involving her well-off dentist father Bill (Ed Harris) and stay-at-home mother Susan (Amy Madigan) who are recently separated in her birthday month of May, which leads to Bill taking up residence at The Jacksonian Motel and encountering Fred and his breathy fiancé, hotel maid Eva White (Glenne Headly). The time, Rosy narrates to the audience, is “not Christmas, near around, before, before Christmas…and a murder happened…” This noir tinted murder mystery set in 1964 Jackson, Mississippi between the months of May and December (though recounted through Rosy’s eyes in non linear fashion) goes to dark, twisted places and yet its characters, who do grotesque things with ugly fervor, do not feel the slightest bit evil. This is largely due to the dream team of actor heavyweights anchoring the production and their ability to flesh out characters that are impossible to judge or condemn. The operatic Ed Harris (Fool for Love, Taking Sides, Precious Sons plus more than 50 film performances, including Pollock, The Truman Show, and Game Change), as the self proclaimed “painless dentist,” prides himself for treating patients with the latest in mid 20th century anesthesia while getting high as a kite on whatever remains in his toolkit. His spiral into a suffering abyss of booze, chloroform, Novocain, sex, and violence is nauseating, nuanced and guttural. At times, it is also very funny.

Ms. Madigan (A Streetcar Named Desire, The Lucky Spot, Twice in a Lifetime, Field of Dreams), whose Susan speaks as if she has a copy of Betty Friedan’s feminine mystique on her bedside table— “I am not an artist. I am a wife, a mother, a non-entity”—is so powerful on stage, with her triple threat vocal, physical, and emotional heft, that all I can ask is why she doesn’t do more theater. Ms. Headly’s Eva is a floozy working every angle for a dime or, more specifically, a diamond ring. Her fractured innocence and racist Southern ignorance make Eva a very difficult character to watch. I found myself wondering (in between laughs) what desperate circumstances could have lead her to this place, though Henley does not bring any of that back story into the piece.

Pullman (Oleanna, The Goat, Peter & Jerry on Broadway plus an array of films from Spaceballs to Sleepless In Seattle), draws Fred, a character that uses colorful compulsive lies (from his “heart muscular constriction” to his near Guinness record sword swallowing abilities) with sly, constipated charm. He also happens to be running from the law and bonds with Rosy, who finds comfort doing her French homework in his bar as if it is her kitchen table. Their connection is weighted, dangerous. Rosy, with her disheveled hair, frumpy outfits, skin condition and husky voice, is not a pretty girl by any conventional standards and believes her ugliness serves “the good of human kind.” To Fred, she is prey. As the atmosphere grows more chilling, Rosy’s direct addresses to the audience are as central to understanding the story as they are to knowing how it feels to be a teenager who longs and aches to be rescued.

Walt Spangler’s set design is simple and effective. The motel’s bar sits stage right with dark wood and dingy Christmas lights that could be there all year round. Stage left is Bill’s motel room, dank and dismal, while even further stage left sits an ice machine. Open. Scoop. Slam! Characters who use it help sustain the rhythm and tension that director Robert Falls (Artistic Director of The Goodman Theatre whose Broadway directing credits include Desire Under the Elms, Talk Radio, The Rose Tattoo and Long Day’s Journey Into Night) builds into the production. Falls gives his actors ample room to play and makes no apologies for Henley’s darkly comedic script. Together they originated the production at the Geffen Playhouse in 2012 with Harris, Madigan, Pullman and Headly, whose trust and chemistry on stage is reflective of the time spent developing the show out west. 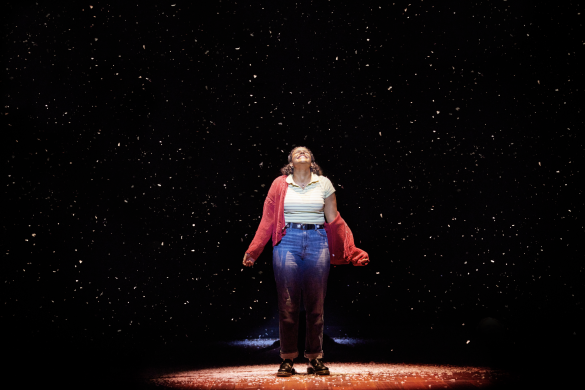