Bertolt Brecht and Kurt Weill’s The Threepenny Opera is easily one of the 20th Century’s most influential and popular works of musical theater — a debauched tale of criminal double-crossing unleashed when a crime kingpin (Mack the Knife) runs off with the daughter of crooked merchant. Its popularity is particularly shocking when you consider that it features a murderer’s row of dissolute characters, overtly political attacks and songs that intrude on the action with bruising willfulness. Then again, when you know you can get home safely afterward, who doesn’t like to spend some quality time hanging out with the bad boys? The good news about the stylish and stripped down (literally and figuratively) production currently at the Atlantic Theater and directed by famed director-choreographer Martha Clarke (Pilobolus Dance) is that you’re unlikely to find another version enacted with such clarity. Every cynical word and unexpected note is presented with admirable musicality and precision, so much so that I felt I was hearing many things for the first time. The diction slices and dices the equally razor-sharp wit of Marc Blitzstein’s 1954 English adaptation. The cast and band shape the songs with obvious care, the crackling vamps and lyrical phrasing bursting with energy (and planting the seedy seeds for many a Kander and Ebb to come.) I found my ears tickled time and again.

Unfortunately, it is this same precision that seems to get in the way of the more earthy pleasures of the show. For a piece that thumbs its nose at theatrical conventions and is populated by thugs, whores and corrupt cops, there isn’t much danger here. The cast is uniformly solid but surprisingly scrubbed and safe. I expected to feel a bit under attack, like these actors might leap into the audience and steal my wallet, but instead the only thing I worried about was whether Oscar-winner F. Murray Abraham was forgetting his lines or just playing with the audience. The stage pictures are elegant, a German expressionist painting come to life and draped with half-naked bodies and bold silent movie shadows, but they don’t always do much to up the dramatic stakes or get at the piece’s pugnacious humor (a delightfully distracting appearance by a bulldog notwithstanding). In the end, I’m glad I had the chance to experience this classic book and score in a production featuring such talented and studious interpreters; I came out of the show with a newfound appreciation for the work. But if you’re looking for a Threepenny that draws blood—and then makes you ask for more—this production falls short. 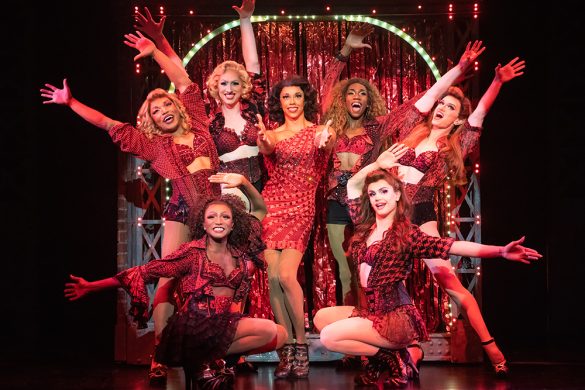