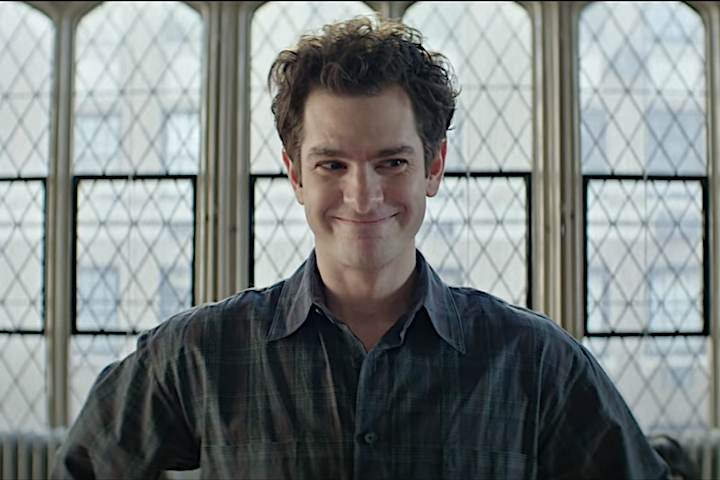 The film Tick, Tick…Boom! could not be arriving at a better—or scarier—time. Just like Jonathan Larson, the film’s protagonist and musical’s creator, I am knocking on 30’s door, wondering how to make sense of an increasingly doom-ridden world and what artistic role I should play in it. This sense of mania, excitement, and apprehension is tightly rendered in both Andrew Garfield’s wondrous leading performance (who knew he could sing!) and Lin-Manuel Miranda’s taut directorial debut.

The movie, now available on Netflix, is a series of Russian dolls: a film adaptation of Larson’s musical Tick, Tick…Boom! about the creation of his never-produced dystopian musical Superbia, snippets from which are heard in the score alongside scenes from his Pulitzer Prize-winning musical Rent, which bookends the film as a way of framing Larson’s success and eventually accepted genius.

Garfield (Tony Award winner for the 2018 revival of Angels in America) plays Larson, embodying the late composer with electricity that surges from his fingertips whenever a hint of a song enters his mind and courses through his body all the way up to his curly hair, which looks zapped because, when you’re turning 30 and need to finish a musical, there’s no time for haircuts and combs.

On a bare stage at a performance of Tick, Tick…Boom!, Jonathan musicalizes the events of his life leading up to his 30th birthday: his deteriorating relationship with his girlfriend Susan (Alexandra Shipp), increasing disillusionment with his actor-turned-advertising executive best friend Michael (Robin de Jesús), and all-consuming worry about his upcoming workshop of Superbia at Off-Broadway’s Playwrights Horizons—which needs more songs, more guests and more money to make it a smash.

The narrative flits between present action (a performance of Tick, Tick…Boom!) and past tense (the real-life events that inspired it). It is mostly a lucid back-and-forth thanks to Miranda’s direction and Steven Levenson’s screenplay, but while it is clear that, on stage for the performance of Tick, Tick…Boom!, Vanessa Hudgens is singing the role based on Susan, it is less obvious that Joshua Henry is doing the same for Michael. Similarly, some moments will have Susan singing a song she influenced at the same time as Hudgens’ character. It is a little muddy that both worlds coexist when, in the original stage production, the cast of three had actors doubling roles, simplifying settings and clarifying narratives.

None of this is enough to remove viewers from the story—the cast dazzles and the music pulses as if, it too, is running out of time, the subdivisions of each beat little percussive explosions.

Part love letter to Larson (who passed away in 1996 at age 35) and part frenetic portrait of anyone who has felt the youth-stealing ticking of time, Miranda’s film is also an homage to Broadway itself thanks to its generous sprinkling of cameos of writers and actors who, like Larson, have pounded the pavement, shattered ceilings, and, through their work, offered affirming responses to anyone who has doubted art’s raison d’etre. Such cameos include Judith Light as Jonathan’s agent, Bradley Whitford as a supportive Stephen Sondheim, encouraging Jonathan’s career, and Joel Grey, Phillipa Soo, Renée Elise Goldsberry, Beth Malone, André de Shields, and more as patrons at the Moondance Diner where Jonathan works.

Such onscreen surprises are little pops that propel the film, but it is Garfield’s raw energy that is a gathering storm. His kinetic energy in response to the weight of time reminded me of other film’s about restless 20-somethings in New York: Greta Gerwig’s running on city blocks in Frances Ha and Lena Dunham’s final act of putting away a ticking alarm clock in Tiny Furniture reminded me of Larson’s, and my own, anxieties about being young and not famous. But no matter the course our life takes, Tick, Tick…Boom! reminds us that we should stop running, look around, and appreciate our gifts—and those who have long supported them.