Top Posts
‘Company’ to Hit the Road on North American...
Meet the Full Cast of ‘Shucked,’ Coming to...
Full Cast for ‘Parade’ Announced
Stephen McKinley Henderson Gives the Performance of His...
The McKittrick Hotel Announces the Return of ‘The...
Broadway Stars Honored with Academy Award Nominations
Taylor Trensch, Danny Wolohan, and More Join the...
A Gay Road Trip Comes to The Brick...
Maude Apatow of ‘Euphoria’ is the Next Audrey...
Tony Award Winners to Star in ‘Hercules’ at...
Home Buzz Review: “When I Grow Up: Broadway’s Next Generation”
BuzzReviews If you ever wonder what Broadway will be like in 10 years, look no further. The talent is bursting at the seams and has been captured for us all to hear. The newish cabaret venue, 54 Below, recently hosted a show featuring “Broadway’s Next Generation” including youth from current and recent shows. The live recording is complete with vibrant kids singing their hearts out to songs slightly out of their current casting range (Book of Mormon, Avenue Q, Company) but delivers in full force.

The first track, “Song of Purple Summer,” is a somber start but a great ensemble piece to feature the entire group of young talent. Emily Rosenfeld quickly brightens up the mood sending her voice to the rafters with “Show Off” from The Drowsy Chaperone. Don’t be fooled by Rosenfeld’s cute sound—it contains power that demands attention and affords her the ability to carry a quirky and fun solo number.

There is no shortage of belting on the album. Emily Rosenfeld, Zoe Considine, Grace Capeless provide good old-fashion showbiz flair, giving the Sondheim classic “You Could Drive a Person Crazy” a robust rendition with just enough zaniness to give it the laughs it deserves. Matthew Schechter must have lungs the size of a hot air ballon with the ability to ride a note the way he drives home “I Believe” from the smash hit The Book of Mormon. The Mormon casting directors should start a stopwatch to countdown until he’s old enough to step into the title roll. Grace Capeless holds true to the spirit of “Waiting For Life”, the title character’s want song from Once On This Island, giving the tune an exciting facelift filling it with brightness and hope.

This gang also can act through a song, many of them showing prowess interpreting character songs and owning their personal relevance to songs composed for adult performers. Ethan Haberfield delivers a knock-out performance of “Mr. Cellophane” and inhabits the song with zest, pulling you into his dilemma as a transparent spouse. Kelsey Fowler’s rendition of “A Way Back to Then” is just as crushingly brilliant as the performance I saw on Broadway—I think Heidi Blickenstaff (the original performer) would be proud to have such talent following in her footsteps. Matthew Gumley nails the emotional bends in the Jason Robert Brown ballad, “Someone to Fall Back On,” supplying an emotional vulnerability that breathes hope into the piece.

These kids didn’t just show up at rehearsal and learn the notes to the songs: they prepared mentally and mapped out the emotional journeys taking place—both in the comedic and more serious moments of this fine selection of musical theater.

When I Grow Up: Broadway’s Next Generation offers a glimpse as to what these stars-to-be may accomplish in the years to come, but it’s clear why they’re already shining bright on the Broadway stage.

When I Grow Up: Broadway’s Next Generation—Live at 54 Below is available at:
Amazon.com and on iTunes 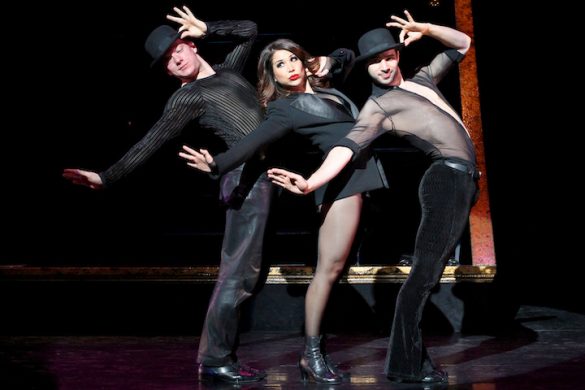