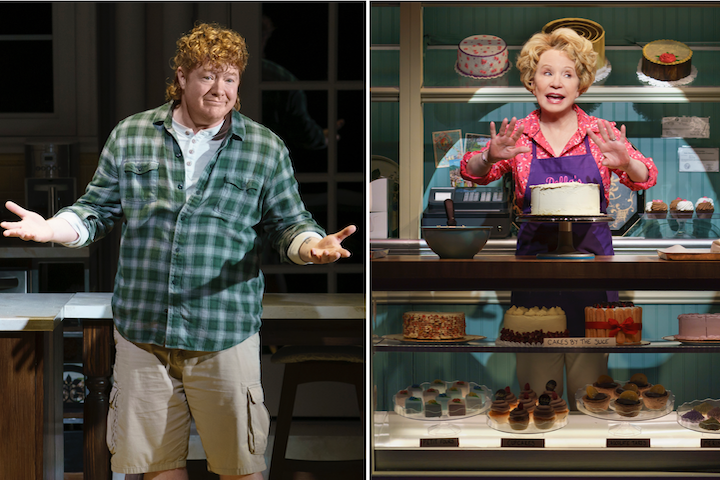 Two very different plays premiering Off-Broadway this winter tackle our ability (or inability) to change. Both examining the subject matter, in part, through sexuality, the playwrights have positioned lesbian and female characters front and center, nudging queer storytelling’s white cisgender male dominance out of the spotlight.

HURRICANE DIANE
To be fair, Pulitzer Prize finalist Madeleine George’s incarnation of Dionysus into a butch lesbian landscaper is really an earthly manifestation of an ungendered deity. At least that’s how trans actor Becca Blackwell sees it. “Dionysus is the god of fertility, the god of nature, theater — these are things that are not steeped in men or women,” they shared in a recent interview for The Broadway Blog. “It’s steeped in the in-between, what gender we put on gods is for us, not for gods.”

Diane (Becca Blackwell) descends upon a cul de sac of New Jersey housewives in an attempt to save humanity from self-destruction. The women are loosely connected by their proximity to one another and identical floor plans, as well as a rumbling discontent. Carol (Mia Barron) obsesses over HGTV Magazine, Renne (Michelle Beck) works for the publication as an editor,  Pam (Danielle Skraastad) is a doomsday-obsessed stay-at-home mom, and Beth (Kate Wetherhead) is rebounding from a recent separation. 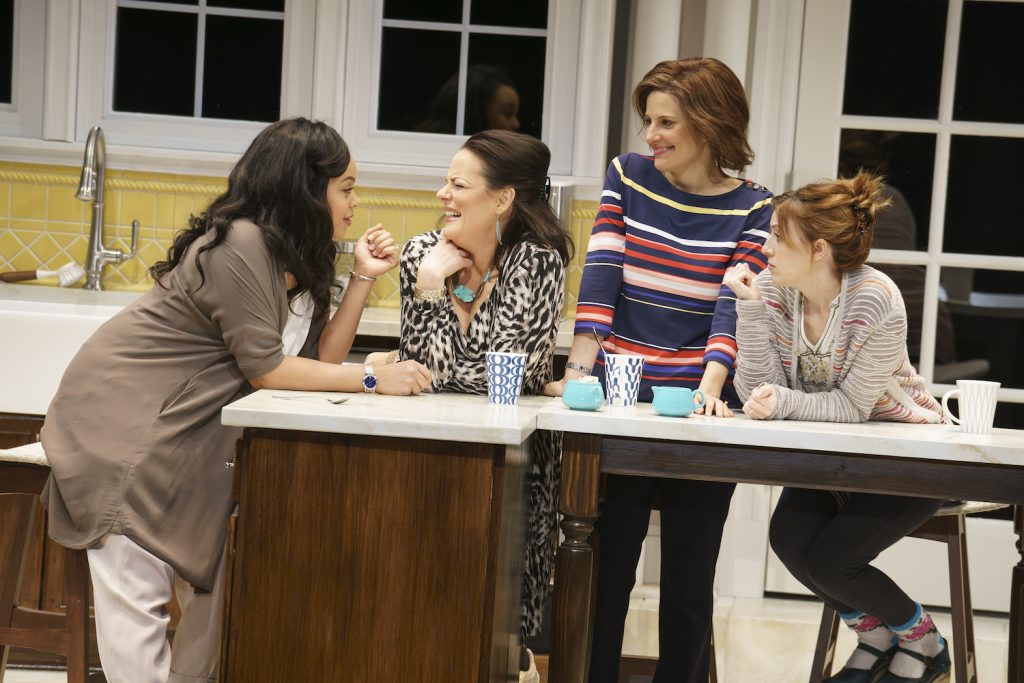 George’s accessible script packs plenty of punch lines as the four women convene in the kitchen to kvetch over wine. Framed by Diane’s direct exchange with the audience, the message is clear: we’re in deep shit and most people could care less. “You don’t know what time it is on the cosmic clock,” laments Diane. “How could you, with your bird lives, your fruit fly lives, hatching and feeding and breeding and dying, all in the blink of a god’s eye?”

The women each respond differently to the prospect of a reawakening and offer George the opportunity to widen the lens with nuanced social commentaries beyond the Jersey suburbs. Carol, as portrayed by Barron, succumbs to the ideology of her picture-perfect life like a hedgehog burrowing for winter. Her purposefully chirpy and squelched voice becomes tighter and tighter as she digs in her heels against Diane’s advances, but eventually morphs into a Voldemort-like force of resistance.

Beck’s Renne, self-described as “the highest-ranking woman of color on the masthead of any shelter magazine in America,” struggles with the true value of success in spite of her ascension up the corporate ladder. “In my experience, it’s hard to move in the world if you don’t show people all of who you are,” responds Diane. Skraastad and Wetherhead, too, have their shining moments, particularly the latter as the fiery survivalist in synthetic leopard prints.

Director Leigh Silverman, who is steadily emerging as one of today’s most thoughtful stage directors, once again provides a platform for her actors to soar, though Rachel Hauk’s bland scenic design does little to elevate the action. A well-appointed kitchen interior set against a black void lacks any sort of impact as permaculture takes over most of the women’s yards. Even its final bacchanalian moments underwhelm.

But it’s true that words can paint a picture, and it will be interesting to see what storm Madeleine George conjures next. 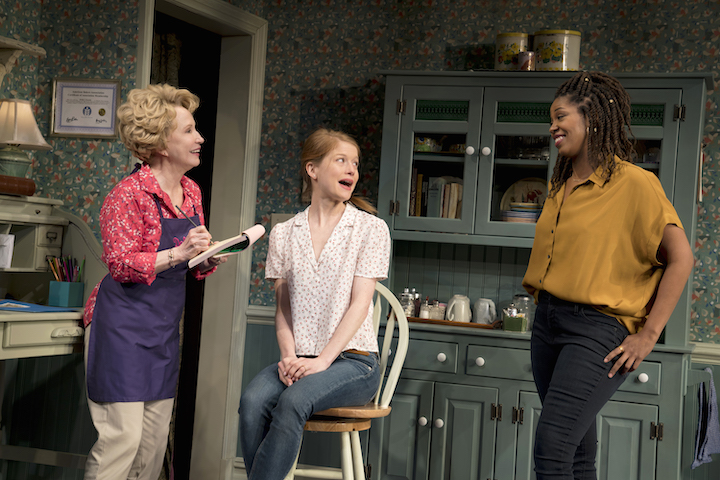 THE CAKE
Becca Brunstetter’s new play The Cake reminds me why I like New York City’s most famous dessert (besides cheesecake): the black and white cookie. You take a bite of one half and you get a tingly confectioner’s sugar glaze, while the other side’s dark chocolate packs a bitter cocoa punch. Its two-in-one flavor profile is the best of both worlds yet both halves are clearly defined. The Cake, unfortunately, is too sweet for my palate in spite of its efforts to get to the underbelly of newsworthy headlines.

Set in Winston-Salem, North Carolina, bakery owner Della (Debra Jo Rupp) dreams of her forthcoming appearance on the reality TV series “The Great American Baking Show.” She reluctantly welcomes a combative gluten- and sugar-free patron (Marinda Anderson) who we soon come to realize is the fiancée of Della’s step-goddaughter Jen (Genevieve Angelson). It’s Jen’s wish to return to her childhood hometown after her mother’s death for her dream wedding and have Della bake her cake. We all know how that’s going to turn out.

Brunstetter, a producer on NBC’s hit drama “This Is Us,” is adept at punchy one-liners (“I read about what’s going on with ISIS and I think to myself, if cake were just free for everybody,” contemplates Della, “there would really be a whole lot less problems in the world!”), but her deeper dive into the characters’ struggles with religion, race, and sexual orientation often feel overwrought rather than extensions of their life experiences.

Even so, Rupp, whose decades-long career spans theater, film and television (she played Kitty Forman on “That 70’s Show” for eight seasons), finds the humor and humility in the baker with existential questions about her faith. The scenes with her teddy bear husband (Dan Daily) border on slapstick as the long-married couple navigate a sexless marriage, but when the language and antics settle down, it’s hard not to feel empathy even for a woman who brags of her Filipino pastor but still feels that “it’s not what God intended” when it comes to same-sex love.

John Lee Beatty returns for his umpteenth scenic design for Manhattan Club and delivers another clever execution, this time a trio of revolving walls that reveal the bakery and various locales. Director Lynne Meadow, too, keeps the action moving at brisk pace, which is particularly appreciated during Angelson’s endless whining about the charm of a potential future in North Carolina even though nobody there seems to accept her for her full self.

Given this choice between a squal or a sweet, I’d head into the superstorm.