Top Posts
‘Company’ to Hit the Road on North American...
Meet the Full Cast of ‘Shucked,’ Coming to...
Full Cast for ‘Parade’ Announced
Stephen McKinley Henderson Gives the Performance of His...
The McKittrick Hotel Announces the Return of ‘The...
Broadway Stars Honored with Academy Award Nominations
Taylor Trensch, Danny Wolohan, and More Join the...
A Gay Road Trip Comes to The Brick...
Maude Apatow of ‘Euphoria’ is the Next Audrey...
Tony Award Winners to Star in ‘Hercules’ at...
Home Show Folk Remembering Rip Torn
Show Folk 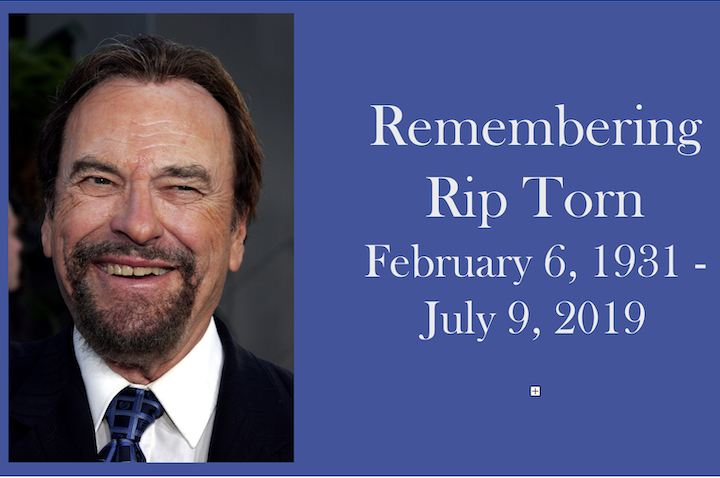 Rip Torn, one of the leading stage actors of his generation and an Emmy Award-winner for his portrayal of the deliciously devious producer Artie on HBO’s “The Larry Sanders Show,” has died.

Torn passed away peacefully this afternoon (Tuesday) at his home in Lakeville, Connecticut, at the age of 88 with his wife Amy Wright, and daughters Katie Torn and Angelica Page by his side.

His remarkable career on stage and screen spanned seven decades, ranging from an early career of dark, threatening roles to iconic comedic performances later in life.

He once said, “Play drama as comedy and comedy as drama”.  He claimed this to be his secret weapon.

Torn appeared on Broadway ten times, with his debut in Elia Kazan’s staging of Tennessee Williams’ Sweet Bird of Youth on March 10, 1959, alongside Paul Newman and Geraldine Page whom he would later marry.  He earned a 1960 Tony Award nomination and won a Theater World award for his role as “Tom, Jr.”, a role he recreated in the 1962 film.

Throughout Torn’s career, critics praised his work on stage.  Clive Barnes said of his last appearance on Broadway, in Horton Foote’s Young Man From Atlanta: “beautiful in its brusque detail.”  And the Academy Award-winning winning actress Estelle Parsons remembered Arthur Penn saying, “Rip starts where every other actor finished up.”

In addition to his work on stage he had a celebrated career in film: The Cincinnati Kid (1965) Payday (1973), and Cross Creek (Oscar nomination 1983); but his career had fits and starts until he displayed his talent for comedy as the defense attorney Bob Diamond in Albert Brooks’ film Defending Your Life (1991). Garry Shandling saw him in that movie and cast Torn in the role he became most widely associated with: talk show producer Artie on “The Larry Sanders Show” (1992). Torn earned six consecutive Emmy Award nominations for the role, winning for Best Supporting Actor in a Comedy Series in 1996.

That show and that role led to a late-life resurgence, with almost 200 film and TV credits to his name at the time of his death.

Rip Torn was married to actress Ann Wedgeworth with whom he had a daughter, Danae Torn. He later married actress Geraldine Page, and they had one daughter, Angelica Page, and twin sons, Tony and Jon Torn.  He had two children with actress Amy Wright – Katie and ClaireTorn.

He is also survived by his sister Patricia Alexander and his four grandchildren: Elijah, Tana, Emeris and Hannah.