Top Posts
‘Company’ to Hit the Road on North American...
Meet the Full Cast of ‘Shucked,’ Coming to...
Full Cast for ‘Parade’ Announced
Stephen McKinley Henderson Gives the Performance of His...
The McKittrick Hotel Announces the Return of ‘The...
Broadway Stars Honored with Academy Award Nominations
Taylor Trensch, Danny Wolohan, and More Join the...
A Gay Road Trip Comes to The Brick...
Maude Apatow of ‘Euphoria’ is the Next Audrey...
Tony Award Winners to Star in ‘Hercules’ at...
Home Beyond Broadway In ‘Roe,’ The Battle for Reproductive Rights Takes All Sides
Beyond BroadwayReviews 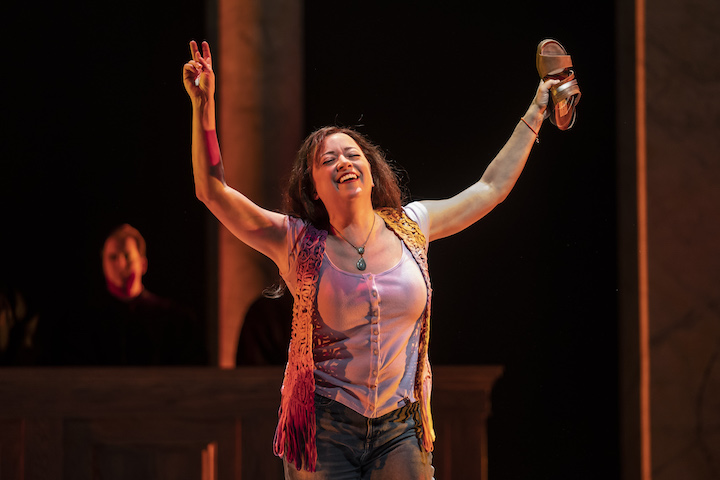 Goodman Theatre goes to court this winter with Roe, Lisa Loomer’s disappointing play about the landmark 1973 Supreme Court decision in the case of Roe v. Wade, which (in theory) rendered a woman’s right to choose the law of the land.

In practice, and undoubtedly dependent upon one’s socioeconomic bracket and the state in which she resides, the fight for access to safe and legal abortions never really ended. Loomer fails to convince that an even-handed, occasionally slapstick approach is the most effective one in telling a critical story about the fight for reproductive autonomy.

Through a 15-member cast of mostly female characters, the script attempts to pull back the curtain and allow audience members to get inside the minds of the case’s principal players, historically encountered only through headlines and soundbites. In this effort, the source material, as directed by Stalling, produces one truly fascinating character study in Connie Gonzalez (Stephanie Diaz).

Connie is the long-suffering partner of Roe v. Wade’s real-life plaintiff, Norma McCorvey (Kate Middleton), and in this telling of the story, the only person capable of disinterested, unconditional love. She also stands alone in self-awareness and resulting self-acceptance. Diaz brings a quiet, understated quality to the role that conversely allows the portrayal to stand out from other confusing characterizations. Social norms and laws aside, all Connie wants is to love Norma and be loved in return.

Middleton creates a fully realized portrait of Norma as sexually and ideologically conflicted, the product of a broken home, and an uneducated addict with a shifting moral code. The multi-dimensional portrayal is engaging. The real Norma was no saint. Neither was she a villain. Instead, like so many impoverished women trapped by society’s legal control of female reproduction, she needed options, support and validation. Middleton’s interpretation of these dramatic tensions gives the audience a Norma McCorvey who is desperate for acceptance, aware of her limitations, and always in search of her personal truth.

That said, some of the play’s other characters are difficult to endure, and in the quest of fair and balanced dogma, the playwright performs too many narrative contortions to make them work. For example, there’s Flip (Ryan Kitley), the “minister of the Free Methodist Church and future head of Operation Rescue.” Norma meets Flip and his family while volunteering, post-Roe v. Wade decision, at an abortion clinic. Audiences can see Flip for the manipulative, flim-flam spiritual practitioner that he is, just as easily as we understand why Norma is seduced by the ideas of forgiveness, salvation and community.

So why for God’s sake (pun intended), does Loomer bother with Flip’s reformed, dissipated youth backstory? It’s frustrating, inauthentic, and seems to imply, however unintentionally, that Flip now walks the right moral path and is a fit judge of Norma’s spiritual journey. Egads.  Hasn’t she endured enough without the extra heavy helping of mansplaining?

And despite fine, nuanced work from actress Christina Hall, I also take exception to the production’s characterization of Sarah Weddington, the young Texas lawyer who took on Roe v. Wade when no one else would, with little chance of successfully pleading the case. As the play opens, we meet an uncertain, idealistic attorney who mystifyingly unravels as some sort of ideological dupe. As though only a sexless, unambitious advocate for the cause can be taken seriously in a broader historical context. What fresh, anti-feminist hell is this? 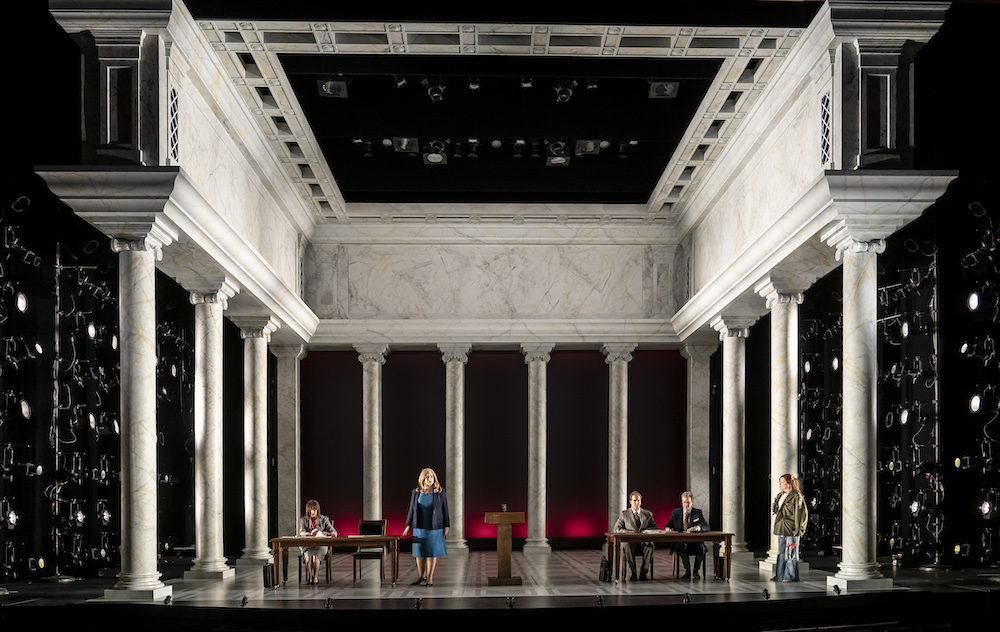 The root of the script’s problem is this: nearly 50 years after the Supreme Court’s decision, we still lack calm, rational dialogical spaces for discussing abortion, and a woman’s asserted or denied right to make decisions about her own body. While I can appreciate the play’s attempt to do that revisionist work at the time historical events occurred, Roe ends up taking all positions — and none at all. In the process, the material perversely upholds quite a few patriarchal stereotypes.

Goodman Theatre’s latest production is certainly provocative but in a head-scratching way that ultimately doesn’t serve this historical sequence of events.