Top Posts
‘Company’ to Hit the Road on North American...
Meet the Full Cast of ‘Shucked,’ Coming to...
Full Cast for ‘Parade’ Announced
Stephen McKinley Henderson Gives the Performance of His...
The McKittrick Hotel Announces the Return of ‘The...
Broadway Stars Honored with Academy Award Nominations
Taylor Trensch, Danny Wolohan, and More Join the...
A Gay Road Trip Comes to The Brick...
Maude Apatow of ‘Euphoria’ is the Next Audrey...
Tony Award Winners to Star in ‘Hercules’ at...
Home Beyond Broadway Married to the Mob: ‘Romeo and Bernadette’
Beyond BroadwayReviews 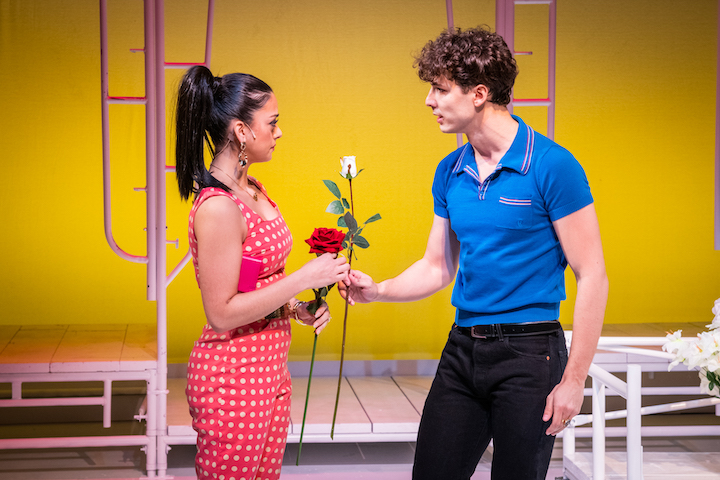 With a radical revival of West Side Story just over the Broadway horizon, it seems like hubris to challenge that musical’s updated take on Romeo and Juliet with yet another one. But that’s just what producers are doing in Romeo and Bernadette: A Musical Tale of Verona and Brooklyn, a far-too-cheesy slice of Italian-American stereotypes set primarily in 1960 Brooklyn and featuring a score based on classic Italian tunes. (In one of the best comic moments, though, it also gives a nod to West Side Story.)

You’d think that, by now, it would be politically incorrect—even in a spoof—to keep harping on the mobster connections and ethnic patois of people baked in the same brick oven that produced the “The Sopranos,” the Coppola and Scorsese movies, “Jersey Shore,” and countless others. That, though, is the raison d’être of Romeo and Bernadette, which, despite a few chuckles and some quality singing, is trite, clichéd, and nonsensical, offering little of value to the recipe. Serrano, a Los Angeles show that tried the same thing with Cyrano de Bergerac, was only marginally better.

The inane premise begins within a framing device in which a slick Brooklyn guy (Michael Notardonato, shadowing John Travolta’s Tony Marino) struggles to impress his English-major date (Ari Raskin) by sitting through a community theater production of Romeo and Juliet, singing:

I know the show ends with disas-tuh.
But can’t they do disastuh fastuh?

Hoping to lure her to his place, he tells her there’s more to Shakespeare’s story that she doesn’t know, thus launching the show within a show. In it, Brooklyn girl Bernadette (Anna Kostakis, the Juliet of the opening scene), visits Verona with her father, a mini-Don Corleone named Sal Penza (Carlos Lopez), and her beehive-coiffed mother, Camille (Judy McLane). The Romeo of Scene One (Nikita Burshteyn) spots her, falls in love, and follows her to Brooklyn, dressed in his Shakespearean garb and spouting ear-wrenching pseudo-Elizabethan dialogue. (The rationale? Don’t ask me.)

There ensues a ridiculous series of events as Romeo, wooing Bernadette, contends with his nasty love rival, Tito Titone (Zack Schanne), while getting involved in a gangster-family feud between Bernadette’s father and Don Del Canto (Michael Marotta). Del Canto’s son, Dino, portrayed by the storytelling guy, becomes Romeo’s mentor in how a Brooklyn guy speaks and acts, while himself pursuing Donna Dubechek, played by the English major actress.

Threats, violence, guns, and romance give way to familial rapprochements and a wedding. After two hours of farcical idiocy, the action returns to the original girl and guy, the latter now ready to explain Hamlet to his date. 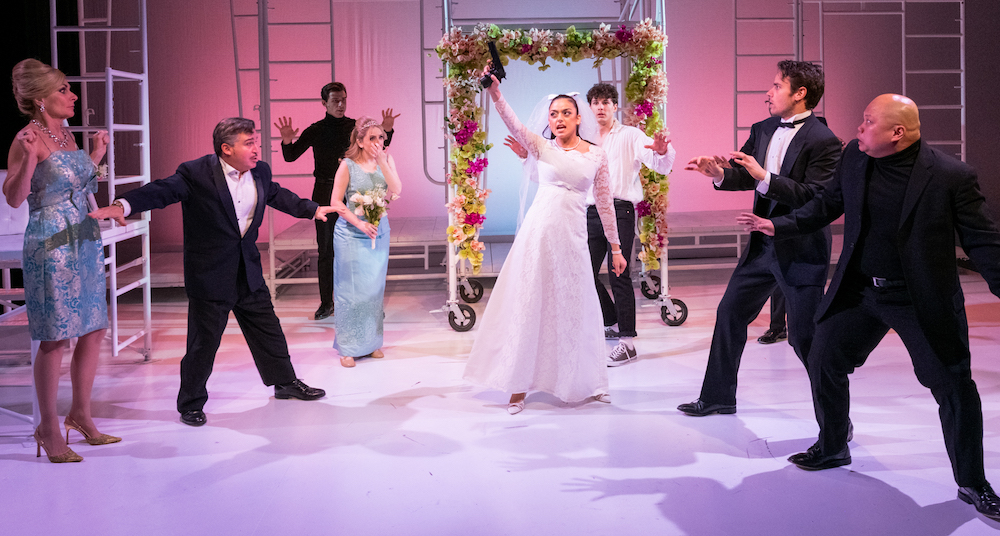 The cast of ‘Romeo and Bernadette.’ (Photo: Russ Rowland)

Justin Ross Cohen’s menza menza direction and choreography do little to elevate the show. His actors are all game but, with a couple of exceptions, like Ari Raskin’s Sandi, few carry off the Bensonhurst accents and swagger without strain. Several sing better than they act. Nikita Burshteyn, a handsome young tenor, has a lovely voice, but he’s unlikely to be cast as Romeo in a serious production.

If you’re familiar with the melodies of Cannio, Falvo, Tosti, Giordani, Rossini, Bellini, and others, you’ll appreciate how they’ve been transformed into period-appropriate pastiches, fitted by Saltzman with lightly amusing lyrics. The music can be distracting, however, as when I kept trying to nail a particularly catchy tune called “There’s Moonlight Tonight over Brooklyn.” Only after I finally remembered it as 1948’s much-recorded “You’re Breaking My Heart” did I learn of its origin as an early 20th-century tune by Ruggero Leoncavallo.

Walt Spangler’s abstract, one-set-serves-all design of white piping satisfies except for when a black curtain is clumsily introduced to separate one locale from the others. Ken Billington adds bright colors to the cyclorama, and Fabio Toblini and Joseph Shrope dress the actors with 1960 flair. But the zippers on Romeo’s boots are as anachronistic as Dino’s use of “Guido.”

Even granted some license, Romeo and Bernadette never justifies its lapses. This show is just asking to be whacked.