In 2016, Nigerian-American playwright Mfoniso Udofia presented two plays in repertory at the New York Theatre Workshop, Sojourners and Her Portmanteau. They are parts one and four in Udofia’s planned nine-play Ufot Cycle, two more of which— runboyun (part three) and In Old Age (part eight)—are currently on the same NYTW bill. Each 90 minutes long, they are soulful, sometimes potent, but nonetheless imperfect expressions of the emotional, familial, career, and marital difficulties faced by Nigerian immigrants as represented by four generations of the Ufot family.

At their heart is the strong-willed Abasiama Ufot, brilliantly played by Patrice Johnson Chevannes, a character also in Sojourners and Her Portmanteau. Each play struggles toward healing by laying the ghosts of a troubled past to rest. runboyrun intertwines realism with poetic heightening to recount the psychological aftermath of Nigeria’s civil war of the late 1960s. In Old Age, which I thought the much more appealing of the plays, is essentially realistic albeit embraced by a supernatural presence.

Perhaps another reason for these plays sharing the same evening is that both are located in the same Worcester, Massachusetts, house. In runboyrun, Abasiama lives there with her husband, Disciple (Chiké Ufot), and in In Old Age, after she’s widowed, she lives alone. Andrew Boyce’s spare, evocative, wall-less set, exquisitely lit by Oona Curley, shows only the house’s timbers, the windows, stairs, and doors standing freely, with a downstage area suggesting a shabby basement retreat.

Disciple, the prayerful, middle-aged author of books about African migration and assimilation, is an adjunct professor at a community college who seems to be losing his mind because he can’t stop reliving a day in 1968. It was during the time when the oil-rich Southwestern region of Nigeria, called Biafra, sought to secede, creating horrendous, possibly genocidal, violence toward the Biafrans.

Disciple was 12 at the time (Karl Green plays him as a boy) and forced to flee the bloody war by settling in a makeshift compound with his maternal sister (Adrianna Mitchell); his wounded, older brother, Benjamin (Adesola Osakalumi); and his protective, commanding mother (Zenzi Williams). 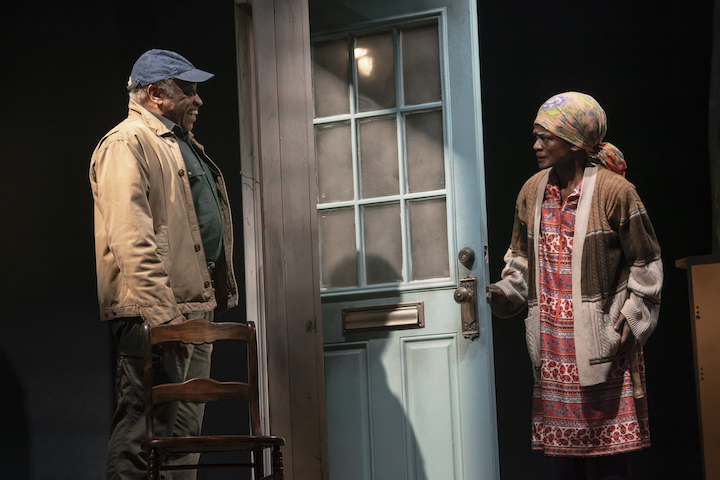 The action, set in the poorly heated home on a freezing January day, explores Disciple’s strained relationship with Abasiama, a biologist forced to work at Sears, who hides from her unhappiness by sleeping on a couch under a pile of blankets. Simultaneously, Disciple struggles to exorcise the ever-present, PTSD-like memories of his childhood suffering, which keep colliding with his present-day life. Vigorously directed by Awoye Timpo, the play’s themes of splitting and wholeness, including relations with the couple’s children, finally resolve following Disciple’s breakthrough regarding a particularly searing memory.

Seeing runboyrun as the Trump administration recently limited the immigration of people fleeing dangerous situations makes the play even more poignant. And there’s a lot to admire in Loretta Greco’s stylish direction and the excellent performances, despite the heavy and not-always clear accents. Still, the insistently intense emphasis on emotional distress prevents much of a dramatic arc from rising, making even 90 minutes seem too much.

runboyrun’s heavy use of ritual and poetic language contrasts sharply with the more mundane world of In Old Age, subtitled “Purge and Passing.” The world of spirits remains, but in a different form. Here, in “a future far removed,” Abasiama has become a crotchety old lady, still embedded in her couch cocoon. The central conflict is her rebellious reluctance to allow an aging handyman, Azell Abernathy (Ron Canada), to perform necessary repairs—a new living room floor, in particular—to the decrepit house.

Azell, sent by their church at the request of Abasiama’s daughter, is determined to do the work but has to struggle to maintain his friendly composure—he’s got dark secrets, of course—in the face of Abasiama’s defiance. At the same time, the spirit of the late Disciple lets itself be known by means of David Van Tieghem’s memorable sound score combining knocks, bangs, and assorted other eerie reminders of the ghost’s reactions to what’s happening.

Humorous and even sentimental, In Old Age is not unlike numerous plays and movies about odd couples whose constant bickering makes it appear they have little in common but who nonetheless find a way to heal their wounds through their shared humanity. Enjoyable as it is, the play, like its partner, is overwritten and could stand to lose 10 to 20 minutes. In fact, much of its appeal comes from the charm and conviction of Ron Canada’s Azell, and Patrice Johnson Chevannes’s tour-de-force performance. It’s one that everyone who left at intermission should regret not having seen.