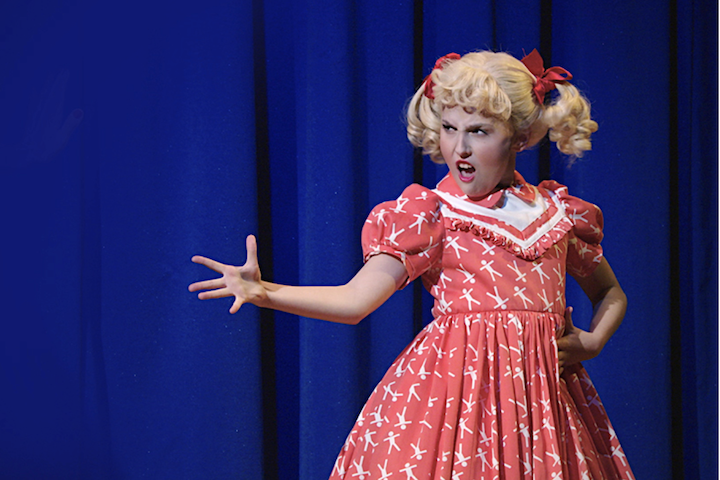 If you’re seeking the thrill of a classic suspense film, the joy of an old-fashioned musical, or a heaping dose of high-camp, look no further than Ruthless! The Musical now streaming on BroadwayHD.

Lyricist Joel Paley and composer Marvin Laird drew inspiration for the show from The Bad Seed, a 1956 film about eight-year-old, Rhoda, who seeks revenge on her classmate Claude after losing a penmanship competition to him.

In Ruthless!, the stakes seem higher for Tina Denmark (Anya Evan) after losing the lead in the school musical, Pippi in Tahiti, to Louise Lerman (Lara Denning). Although Tina’s mother, Judy (Kim Maresca), encourages her daughter to pursue an education instead of stage fame, Tina shrugs it off. Instead, she’s now been taken under the dangerous wing of unscrupulous talent agent Sylvia St. Croix (Jason Gardiner).

With its ludicrous plot twists and false identities, Ruthless! becomes more outrageously campy as it goes, offering the perfect antidote to the news coverage of our current global state.

Although this filmed version was recorded at London’s West End Arts Theater during its 2018 run, Ruthless! has been around since 1992, when it premiered at New York’s Players Theatre. Laura Bell Bundy starred and then-unknown talents Britney Spears and Natalie Portman were cast as understudies.

In 2014, Paley and Laird revived the show briefly for a Broadway Cares/Equity Fights AIDS benefit. That staging introduced audiences to Sophia Anne Caruso, who recently appeared as Lydia Deetz in Broadway’s Beetlejuice.

One year later, Ruthless! returned Off-Broadway to St. Luke’s Theater. On opening night of that production, there was more romance than revenge at the after-party when Paley proposed to Laird, his partner, for 39 years. The event was serendipitous as Laird was also considering marrying the love of his life at the same time.

Initially, the pair wanted to adapt The Bad Seed into a musical parody, but they had difficulty acquiring the rights from playwright Maxwell Anderson’s estate. Instead, they reimagined the idea by adding elements from other sources, including Gypsy, All About Eve and The Women.  They also believed that the show would be an all-female cast, but after they saw costumer Joel Vig flaunt his wares in a drag show, they knew that they had discovered the perfect Sylvia St. Croix. Since then, the role has usually been played by male actors.

There are lessons to be learned in Ruthless! about unbridled ego and an insatiable craving for stardom. Ultimately, it’s a valentine to classic films and musical theater, offering a welcomed escape from our current worldly woes.

Ruthless! The Musical
Available for streaming on BroadwayHD.
Like this? Consider these other laugh-out-loud hits: Nunsense, The Goes Wrong Show and Puffs.
The Tempest flashback: Check out what critics thought of the 2015 Off-Broadway revival.