Top Posts
‘Company’ to Hit the Road on North American...
Meet the Full Cast of ‘Shucked,’ Coming to...
Full Cast for ‘Parade’ Announced
Stephen McKinley Henderson Gives the Performance of His...
The McKittrick Hotel Announces the Return of ‘The...
Broadway Stars Honored with Academy Award Nominations
Taylor Trensch, Danny Wolohan, and More Join the...
A Gay Road Trip Comes to The Brick...
Maude Apatow of ‘Euphoria’ is the Next Audrey...
Tony Award Winners to Star in ‘Hercules’ at...
Home Show Folk Up Close and Personal with Ryan J. Haddad
Show Folk 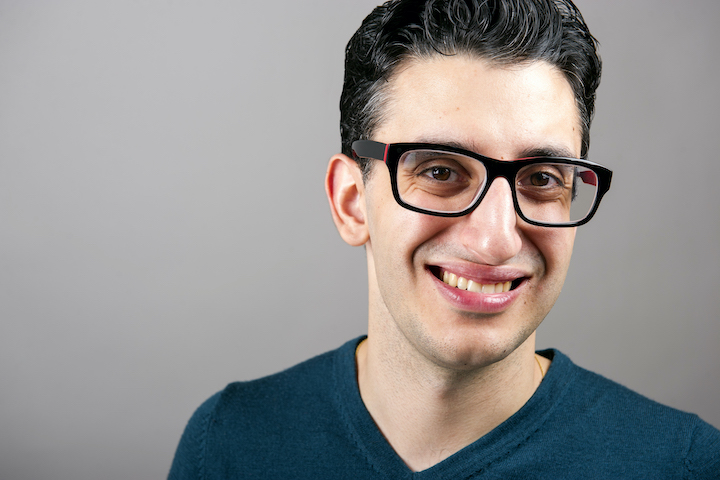 Have you ever heard of the Haddad Theater? A shooting star that lasted eight years, Ryan J. Haddad recruited his parents, siblings and revolving cast of other relatives to create improvised shows that eventually progressed from the intimate confines of his living room to the local community center. The actor-playwright returns to Joe’s Pub for a limited-run of Falling For Make Believe (through January 17) as part of the Under the Radar Festival, which for 16 years has served as a premier launching pad for new and cutting-edge performance from the U.S. and abroad. The Broadway Blog chatted with Haddad about his latest work and the evolving landscape of opportunities for actors with disabilities.

The Broadway Blog: Your latest show, Falling For Make Believe, is inspired by family productions that you helmed starting at age five. Who and what were some of your early creative inspirations?

Ryan J. Haddad: I had a somewhat delayed education, given some mobility things. The summer that we started the Haddad Theater, I had leg surgery to do a hamstring and heel cord release. As a result – and we knew this going in — I was going to have a third year of pre-school. Major inspirations included Disney princess movies: Cinderella, Snow White and Sleeping Beauty. I was also obsessed with Barney, and there was this TV special Barney Live at New York City. That’s where the bug to create came from, as well as the iconic film Sister Act Two: Back in the Habit. In the second film, Whoopie turns all the kids into a singing choir, and I identified with that. But I didn’t want to be one of the kids — I wanted to be Whoopie Goldberg.

I couldn’t walk. I had a walker, and would use it — but even before the walker, I would crawl around. When I was five, I asked my grandfather to build me a stage. And he did. And now that I had a stage, I couldn’t do the shows just on my own. I saw a live stage production of The Red Shoes and a touring production of Beauty and the Beast, but neither experience was as integral as the TV and film that I could constantly ingest and watch over and over.

BB: What was your household dynamic growing up that would encourage this blatant familial display of creativity?

RJH: I was the driving force. I had aunts, uncles and grandparents who loved the theater and would go to the symphony and museums. But I lived with parents and older brothers who were not connected to the arts. The extended family didn’t necessarily need to be converted as much as my parents, but they also knew, “Oh, this kid is interesting,” even though it wasn’t second nature to them. My parents knew something was happening, that I could hear Whitney [Houston] sing a song, listen to it one more time, and then be able to sing it. I was never denied access once I was able to express interest. I don’t know what the source was. I had this drive to perform in whatever capacity it was going to take and they were always supportive.

BB: How much of the show focuses (or doesn’t focus) on how cerebral palsy impacted your creative expression growing up?

RYD: This isn’t a show about my disability, though there is one poignant monologue about being in an acting class with kids around my age and seeing that there wasn’t necessarily as welcome of a space for my walker and me as I would have liked. And for the first time, coming to terms with what that meant for me. This was my dream.

The later years of the Hadda Theatre, when it ballooned beyond the backyard and got bigger and bigger, were fueled by the idea that “Well, I’m going to have to make the space for myself instead of assuming that it’s going to be there.” And it’s what I’m still doing today.

BB: In your own work, you control the narrative, but what industry shifts — either in theater or TV/film are you seeing for disabled actors?

RJH: There’s been a major shift just in the four years I’ve lived in New York in terms of the call to welcome and include disabled stories, and disabled bodies, and disabled people — whether it’s physical, mental, emotional, cognitive, social, neurological — there are so many manifestations, and there is an array of stories to be told among us.

The Politician, specifically, was looking for a person with cerebral palsy. It was a divine combination of ‘yes, I have cerebral palsy,’ and also my personality and sense of humor were appropriate for that role. That’s opened doors in the past few months that I couldn’t even fathom. But even prior to that, I have had a wonderful beginning of my career. I began in August 2015, in the basement of Dixon Place, doing my show, Hi, Are You Single? and continue to do it around the country. I’m continuing to develop my solo work.

HI, ARE YOU SINGLE? Teaser from Ryan Haddad on Vimeo.

I have fostered relationships with casting directors and industry folks because they know me as a creator as well as an actor. I’ve been invited into the room, not necessarily because they see me as perfect for a part, but because I’ve created vehicles in which my abilities are on display in a wider range and more interesting fashion than a lot of material that pigeonholes disabled actors.

I ask myself, what is the story I’m trying to tell? What is the best story to be told about a moment or theme or idea? The highs, lows, humor, laughter and pathos swirl together into a very nuanced portrait of the disabled experience, even if it’s a show that only talks about disability for five minutes. No matter what, I’m standing on stage or on camera with a walker next to me. That is representation. It doesn’t always have to be about the disability to be representative of the disabled experience.

RJH: I’m filming season two of The Politician, which wraps early spring. There are some readings of projects that are in development and solo performances. It’ll be a busy year, populated with my work either in performance or in development.

What’s so exciting about continuing to dive into the autobiographical realm is that there are so many stories to be told, so many crevices of those experiences to unearth, to share, and to shape into a narrative. And not all of them have to be about the same thing, even if the same ingredients are represented in each piece.

I focus on specific themes and ideas. I can’t cover everything in equal measure in every project — and don’t feel the need to. Because if you want me to do that, then you’re not interested in my storytelling, you’re just interested in my identity.