Top Posts
‘Company’ to Hit the Road on North American...
Meet the Full Cast of ‘Shucked,’ Coming to...
Full Cast for ‘Parade’ Announced
Stephen McKinley Henderson Gives the Performance of His...
The McKittrick Hotel Announces the Return of ‘The...
Broadway Stars Honored with Academy Award Nominations
Taylor Trensch, Danny Wolohan, and More Join the...
A Gay Road Trip Comes to The Brick...
Maude Apatow of ‘Euphoria’ is the Next Audrey...
Tony Award Winners to Star in ‘Hercules’ at...
Home Reviews A Letter-Perfect ‘She Loves Me’ on BroadwayHD
Reviews 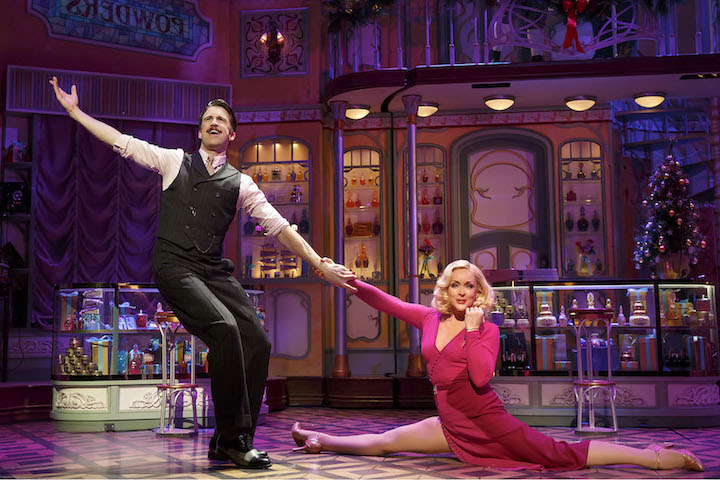 Gavin Creel and Jane Krakowski in ‘She Loves Me.’ (Photo: Joan Marcus)

Of all the wrong places to be looking for love, your place of employment could top the list. This irony is among the many reasons why She Loves Me, a champagne cocktail of a romantic musical comedy, has been such an enduring favorite of diehard Broadway fans. And thanks to theatrical streaming service Broadway HD, all the quirky charm of the spot-on 2016 Roundabout Theatre Company production has been preserved.

Set in 1934 Budapest, She Loves Me is about an upscale perfume shop whose workers include a curmudgeonly owner, ambitious delivery boy, a nebbish who merely wants to fly-under-the-radar, and a love-starved cashier carrying on a secret affair with a lecherous sales clerk. At the center of the story are Georg, the shop’s manager, and quick-tongued Amalia, a new hire. Sparks fly between the pair immediately, but the kind of sparks that are best kept away from kerosene. Their hatred of each other is incendiary. The hook is, they’ve both got a secret. As members of a lonely-hearts club, they’ve been unknowingly writing each other letters for months and have fallen in love.

Based on the play Parfumerie by Hungarian playwright Miklós László, She Loves Me is the third adaptation of this property following the 1940 James Stewart film The Shop Around the Corner and the 1949 Judy Garland musical, In the Good Old Summertime. It even got an email update in the 1988 Tom Hanks/Meg Ryan rom-com You’ve Got Mail. Originally presented on Broadway in 1963, She Loves Me starred Barbara Cook and Daniel Massey and was helmed by Hal Prince, who garnered his first directorial Tony nomination for his work on the show. Its lauded 1993 production was the musical that put Roundabout artistic director Scott Ellis (The Rose Tattoo,  Tootsie) on the map. 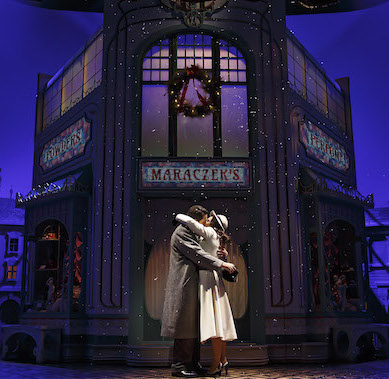 Zachary Levi and Laura Benanti in ‘She Loves Me.’ (Photo: Joan Marcus)

Returning 23 years later, Ellis has taken a slightly different tone with She Loves Me. The jokes in Joe Masteroff’s book pack more of a punch. The songs by Jerry Bock and Sheldon Harnick feel more rhapsodic and romantic. All of this plays beautifully inside designer David Rockwell’s art nouveau-inspired jewel box set.

But Ellis’ ace-in-the-hole is the casting of this letter-perfect revival. As unwitting lovers, Georg and Amalia, Zachary Levi (Thor) and Laura Benanti (Meteor Shower, Gypsy) have palpable chemistry. In back-to-back second act songs, Benanti gets to show off her lyric soprano pyrotechnics to confectionary perfection in with “Vanilla Ice Cream,” followed by Levi’s exuberant clown-like take on the show’s title song. It’s a joy watching them spar on stage and later fall in love. However, stealing the show is Jane Krakowski (Nine, 30 Rock) as Ilona, who oozes with comic sexuality an unlikely pathos as she is used and spurned by the lascivious Kodaly, played to devilish perfection by Gavin Creel (Hello, Dolly!, Thoroughly Modern Millie, Hair).

All of the action of this musical transfers beautifully to the small screen primarily due to the width of the house of the theater, Studio 54, itself a television studio before its notorious nightclub days.

She Loves Me has delighted audiences for over 50 years, but perhaps during a time like now, it resonates more with people whose would-be romances are restricted to texts or other forms of written correspondence. However, even if you’ve seen the show on-stage numerous times before, you won’t be able to stop yourself from falling in love with it all over again on your sofa.

She Loves Me
Available for streaming on BroadwayHD.
Like this? Consider Daddy Long Legs, another letter-writing musical set in early 20th-century America.